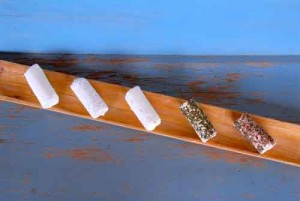 After your first lap around a long buffet table full of casserole dishes, crock pots and trays of vegetables and cheese, where do you return to snack? The cheese options are always pretty popular, even if it’s just the tried and true cubes of hard cheeses or ready-made options from your local grocer. Whether you’re trying to create a festive cheese tray for the holidays, or want to up your culinary game, goat cheese always makes an impression.

Goat’s milk cheese is known for its smooth consistency and robust flavor, but it may also be more beneficial than its bovine counterpart. The fat structures in goat milk cheeses are smaller, which makes them more digestible than cheese from cow’s milk. That means many people who are intolerant to traditional dairy products can enjoy a bite or two of these without the ugly consequences. Goat cheese is a good source of protein, potassium, thiamin, niacin, calcium and vitamin A. It’s also great to know that many fantastic goat cheeses come from nearby.

Will Frischkorn who, together with his wife Coral, owns Cured in Boulder, sees a lot of quality cheeses coming from Colorado. Cured specializes in hand-picked cheeses, charcuterie, wines and other specialty food items. “Colorado is a cheese state now and it’s starting to mature,” Frischkorn said. “We have a number of people making cheeses here and it’s exciting. It’s something we’re lucky to have.”

Among Frischkorn’s favorite local cheeses is Haystack Mountain Dairy’s goat’s milk offerings. The Longmont-based goat dairy offers several Monterey Jack varieties like Vaquero Jack, Buttercup and Chile Jack, and has won American Cheese Society awards in recent years. There are also lots of soft goat cheeses available, including several styles of Chèvre and a feta, which Frischkorn praised. “We use it on sandwiches and in salads. It’s so clean and bright, making it a more energetic cheese than others,” Frischkorn said. Haystack Mountain Dairy’s goat’s milk cheese has also won numerous awards over the years from the American Cheese Society.

Basalt-based Colorado’s Avalanche Cheese Company is another popular Colorado-born cheese. Frischkorn recommends the company’s Cabra Blanca for a cheese tray option that will impress friends and family. “It’s the perfect snacking cheese. We’re using it in our Colorado Gift Box this year too. It’s a semi-firm cheese, really bright and clean and grassy,” he said. “You can even give this one to people who think they don’t like goat’s milk cheeses and they’ll love it.” Avalanche describes Cabra Blanca as an aged semi-soft cheese with a lacy pate and slight citrus notes. You can call it delicious.

For holiday cheese or snack trays, give goat cheese a place among the usual cheese, crackers and sides of fruit and see how your guests respond.