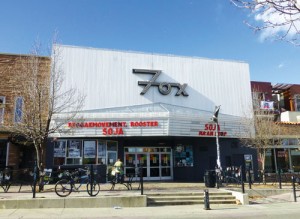 25th Anniversary Month at the Fox Theatre
The month of March is a big one for one of the nation’s pre-eminent live music venues. The vaunted Fox Theatre celebrates its 25th Anniversary this month, and in unadulterated Fox fashion, that means a slate of some of the best acts you’d hope to see throughout the month, starting with sold-out shows from 3OH!3 and String Cheese Incident, Leftover Salmon (March 6), The Greyboy Allstars (March 10–11), The Motet (March 17), The Magic Beans (March 18), The Funky Meters (March 23), Robert Randolph and the Family Band (March 24), The North Mississippi All Stars (March 29) and G. Love and Special Sauce (March 31) — and that’s about half of the acts on the month-long bill. Head to www.foxtheatre.com for prices and times. And a big, sincere congratulations to the Fox for reaching this milestone.

BANFF Mountain Film Festival at the Boulder Theater
If you live in Colorado and you’re not in love with at least some aspect of the myriad mountain activities afforded to you in the Centennial State, why do you live here? It’s so expensive! And also the traffic. Okay, now that 6 of you have stopped reading, for the rest of you, get to the Boulder Theater for this year’s BANFF Mountain Film Festival World Tour, running Feb 28–March 1. A high-definition, high-altitude, high-adventure exploration of the cultures, sports and environments that make up the mountain regions of the planet. Tickets start at $22, get more info at banffcentre.ca.

John Scofield at the Boulder Theater
If you’re looking for a more accomplished jazz guitarist, you’re wasting your time. John Scofield’s resume is pretty much unmatched, considering it includes names like Herbie Hancock, Charles Mingus, Billy Cobham and the legendary Miles Davis Himself. In his latest outing Country For Old Men (Impulse Records, 2016), Scofield traded in his flat cab for a cowboy hat, and picks through country standards by the masters —Dolly Parton, Merle Haggard, Hank Williams and George Jones, to name a few. He’s on tour supporting this album and stops in at the Boulder Theater on Feb. 27 at 7 p.m. Tickets start at $30 and are available at www.bouldertheater.com

And Then There Were None at the Louisville Center for the Arts
Murder mystery fans can get their fill of the great Agatha Christie at Coal Creek Theater of Louisville’s upcoming production of And Then There Were None. This perennial mystery classic, based on the 1939 book, tells the story of eight guests who have been lured to an island as, one by one, they are accused of murder and as, one by one, they start to die. See if you can guess who the murderer is as the Coal Creek Theater company takes the stage to tell this beloved classic. Directed by the theater’s Dan Schock, the production runs Feb. 24 through March 11 with performances on Friday and Saturday nights as well as Sunday afternoons. Louisville Center for the Arts, 801 Grant Ave. in Louisville. $18 for adults or $15 for students and seniors. cctlouisville.org

Bourbon and Blues at Nissis
History’s made of great duos doing great things together. Dean and Jerry. Peanut butter and Jelly. Abbot and Costello. Chocolate cookies and cream stuff. Fred and Barney. Trump and his mirror. But few of them approach the genius of bourbon and blues and that’s the name of the weekly installment Wednesday nights at Nissis (2675 Northpark Dr., Lafayette) in March, starting with the Delta Sonics on the First, then the Randall Dubis band, Blue Limousine and ending March with Mojo Mama in alliterative form. Admission is free, so drink up and tip well. Head to nissis.com for more information.

Disenchanted at BDT Stage
In the vein of Sondheim’s Into the Woods comes Disenchanted, a new musical comedy satire that pokes fun at all your favorite fairy tales. This hit musical comedy was an off-Broadway favorite in 2015 and it’s now headed to Colorado, thanks to the team at BDT Stage. The story of Disenchanted involves all your favorite fairy tale princesses as they grow angry with the exploitation they’ve suffered at the hands of today’s filmmakers and toy manufacturers — enter Snow White, Cinderella, Sleeping Beauty, Belle, Mulan, The Little Mermaid and Pocahontas united together to save the day. This is not your typical Disney-style musical. It’s recommended for adults, thanks to some mature situations and parody that the younger kiddos just won’t appreciate. Disenchanted runs March 3—May 6 at BDT Stage, 5501 Arapahoe Ave. in Boulder. Tickets range from $41 to $65, including a full dinner served to your table by the actors in the production. bdtstage.com.