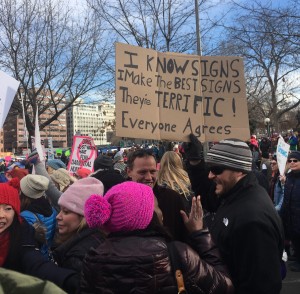 Sarcastic signs of the times — from the Denver Women’s March.

Vehicles now need at least 3 occupants to cruise toll-free in HOV lanes on US 36 and I-25. • Here’s some belated holiday cheer: One week after Toys for Tots announced it would only be able to fulfill 10 percent of its 100,00 gift requests, the organization announced it was overwhelmed with gifts and was at capacity. • Broncos head coach Gary Kubiak resigned after two seasons, citing health concerns. The team hired Dolphins defensive coordinator Vance Joseph as the new head coach. Joseph was an assistant coach at CU during the recruiting scandal years and left the job amidst 2004 sexual assault charges. • Boulder nonprofit Protect Our Winters triggered a blizzard of tweets in its social media campaign to convince president-elect Trump to #KeepParis; i.e. don’t pull out of the Paris climate agreement among 195 countries. The the international agreement went into effect days before the election. • Four teenager males were arrested in connection with a series of marijuana dispensary burglaries in Boulder County during the summer and fall of 2016. Stealing drugs is an easy way to compound criminal charges, which include a range of felonies and trafficking. • Boulder joins Denver in reaffirming its stance as a sanctuary city, which means it will forego federal grants for violating Trump’s “Secure Communities Program. • Lafayette City Council approved a Climate Bill of Rights and Protections despite challenges to its constitutionality of from city administrator Gary Klaphake and city attorney David Williamson. Prior to the 4-1 vote, Williamson told the council such legislation would likely be unenforceable under the city’s home rule powers. • Crested Butte received more than 100 inches of snow by mid-January, causing ski resorts and schools to close for the first time in decades. • The rusty patched bumblebee will become the first bee to make the endangered species list in the continental US. • Obama commuted the sentence of Army Pvt. Chelsea Manning, who will be released in May (as opposed to decades from May). • Representative Jared Polis was appointed to serve on some heavyweight congressional committees: Ethics; Rules; and the Education and Workforce committee. • Protesters and lawyers came to DIA to assist those detained under Trump’s “Muslim ban” which was blocked by a federal judge. • 1984 is again a best-selling book.

“With all that Congress has to work on, do they really have to make the weakening of the Independent Ethics Watchdog, as unfair as it may be, their number one act and priority. Focus on tax reform, healthcare and so many other things of far greater importance!”
— [Then president-elect] Donald Trump’s tweeted response to the House Republican move to cut an ethics committee.

“I will refer back to Sen. Enzi and the school he was talking about in Wyoming. I think probably there, I would imagine that there is probably a gun in the schools to protect from potential grizzlies.”
— Betsy DeVos, in response to whether she agreed guns don’t belong in schools.

“I do have one final ask of you as your president — the same thing I asked when you took a chance on me eight years ago. I am asking you to believe. Not in my ability to bring about change — but in yours.”
—President Obama in his farewell speech.

“Alternative facts are not facts. They are falsehoods.”
— Chuck Todd to Trump’s counselor Kellyanne Conway

86
The number of Boulder underpasses; once construction of seven new ones is complete by 2020.

$150M
Civil penalty McKesson Corporation was ordered to pay for not reporting suspicious orders of its opiates.

100K
Estimated turnout for the Women’s March in Denver.