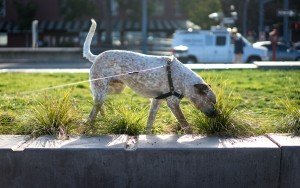 It’s time to stop making exceptions for our pets and take responsibility for their ecological footprint — the planet depends on it.

In theory, it makes sense to uphold these same ethical standards in every aspect of our lives. But in practice, many people make exceptions when it comes to their pets. And while one single act of negligence may not seem like a big deal, it’s when we all start to make exceptions that a more serious picture emerges.

Let’s say you sometimes leave your dog’s waste in a certain park. Not so catastrophic, right? Now, consider what would happen if this exception was made for each of the 30,000 dogs that reside in the city of Boulder. Not only would the park would be unfit for humans and other animals, it would also pose a serious risks to the surrounding land, air and water. And if we don’t start taking responsibility for our pets’ ecological footprint, this is the reality we’re destined for.

Realigning the moral compass in regards to our pets starts by acknowledging and respecting the fundamental differences between humans and animals. As explained by Anthony Bennie, founder and chief nutrition officer at all natural pet nutrition company Clear Conscience Pet, this requires that we become educated about which foods serve our pet’s needs according to science. “It means not being “grossed out” by organ meats, which are excellent for dogs, and not being squeamish about giving them rugged treats made from connective tissue like trachea, tendons and cartilage that satisfy their instinctive urge to chew” said Bennie, whose company specializes in food that mimics the diets of wild canines.

Clear Conscience pets is among a growing number of natural animal nutrition companies seeking to improve transparency and nutrition education in the pet food industry. An important part of this effort is helping consumers see beyond the traditional marketing tactics used to persuade pet owners to buy foods that are unhealthful for animals. Desserts and carbohydrate-rich foods, for example, won’t cause major damage in humans when enjoyed in moderation. Alternatively, giving our animals pupcakes, cookies, and other processed foods high in grains goes against their biological needs.

According to Dr. Lesli Groshong, DVM, Chief Shelter Veterinarian at Humane Society of Boulder Valley, feeding pets sweets and other inappropriate foods can cause a variety of health risks, including obesity. “Obesity can cause many long-term health hazards for pets, ranging from orthopedic conditions (joint deterioration, exercise intolerance, soreness) to heart and liver disease.”

Understanding our pet’s nutritional needs is at the forefront of responsible pet ownership. Beyond this, we must also seek to understand where the ingredients in pet food come from. The majority of commercial pet food contains byproducts from industrial farms, a leading source of the greenhouse gas emissions that cause climate change. According to The United Nations’ Food and Agriculture Organization, livestock production accounts for 35 percent of total anthropogenic methane emissions.

But since dogs and cats are carnivores, we can’t stop feeding them meat all together. The best way to overcome these dilemmas while also meeting the nutritional needs of our pets is choosing food made from local companies and humane farms. Anderson’s Natural Pet Food is a perfect example — the company raises beef, elk and lamb on a low-impact farm in Montrose, Colorado. In addition to supporting local economies and avoiding factory farm byproducts, buying pet food and treats from small-batch manufacturers makes it much easier to understand what’s in the food and where it comes from.

According to the Keep it Clean Partnership, a group of communities on the front range that addresses stormwater pollution issues — the average dog produces approximately three-quarters of a pound of poop every day. With roughly 90,000 dogs in Boulder county, that equates to 11,700 tons of waste per year.

This wouldn’t necessarily be a problem if our pets could use septic systems and dispose of waste like humans do. When hundreds of people don’t pick up after their dogs on a daily basis, however, waste contaminants leach into nearby rivers and streams. “This can be a serious health hazard for our community, as dog waste harbors parasites that are infectious to other dogs,” said Groshong.

Parasites like Giardia, whipworms, and coccidia can cause diarrhea and vomiting in dogs, and hookworms can cause the same or severe anemia in puppies.

What’s more, intestinal parasites like Giardia are zoonotic, meaning that they can infect people. “People can be infected when these parasites contact our bare skin, most often when we walk barefoot on contaminated beaches or soils,” said Groshong.

Routine fecal tests and heartworm preventatives can keep some parasites at bay, while instances of Giardia and coccidia in dogs require veterinary treatment.

Beyond these health risks, dog waste poses serious environmental threats. Whether left on hiking trails, grass, or nonporous surfaces like streets and sidewalks, dog waste eventually washes into stormwater systems, where it’s then deposited into nearby rivers and streams. Here, the high levels of phosphorous and nitrogen found in dog feces severely impacts water quality. According to the EPA, excess nutrients can cause algae blooms, which use up vital oxygen that fish, plants, and other forms of aquatic life need to survive.

Boulder area parks already suffer the consequences of irresponsible dog owners and some have been forced to close indefinitely. Among the shuttered spaces is Evergreen’s Elk Meadow Dog Park, a 107-acre stretch of land that has been enjoyed by humans and pets for 15 years. Elk Meadow Dog Park accumulated up to 80 pounds of waste some weeks, and the land simply couldn’t keep up.

Park closures prompt dog owners to navigate to new parks, and it’s only a matter of time before they face the same fate as Elk Meadow. Perhaps the most viable solution to this problem — and one that’s largely untapped by Colorado municipalities — is dog waste composting.

Leading the way in this effort is Envirowagg, a local company that creates potting soil from composted Boulder and Denver dog waste. Envirowagg combines high heat, a carbon source, and naturally-occurring microorganisms to create compost that meets EPA standards for growing edible crops. Each batch is also tested to make sure it’s free of pathogens that can be potentially harmful to humans and pets.

Envirowagg partners with Pet Scoop, a Colorado-owned pet waste management company, to collect dog waste for compost. Boulder supplies certified compostable bags (ASTM D6400) and Pet Scoop provides designated bins at parks, trails and other public spaces. Such facilities make composting extremely easy; however, Envirowagg owner and operator Rose Seemann pointed out that many people still decline to use them. (Others use them, but not properly: plastic bags and pieces of garbage unsuitable for compost still appear in the bins despite clearly marked labels.)

Another barrier complicating the issue is a growing trend around the term “biodegradable” to market certain dog waste bags. A bag labeled as biodegradable or compostable still doesn’t break down on its own, and heaving these bags into the woods further exacerbates the issue.

“There are bags now that are called biodegradable, and all they do is come apart — the basic strips of plastic remain intact and they get into the environment,” Seemann said. Even when compostable, biodegradable, and plastic bags are thrown in the garbage, she said, they end up in landfills where they remain “mummified” and produce dangerous methane gasses.

To change these habits — and divert plastics and dog waste from the landfill — owners need to realize that composting translates into a tangible product that can greenify spaces. “It would help if people knew that there’s a product at the end of it. Buying product (Envirowagg’s compost) facilitates programs everywhere. It’s difficult for people to get over the ick factor even though the products are really good.“

The presence of pet waste compost bins at area trails does put Boulder ahead of other cities in the nation. On a global scale, Seemann said, there’s still much work to do. “In Canada, local governments and districts pay for pickup and composting. People can throw dog waste in with their food scraps and it gets picked up curbside and its composted well.”

Whether due to sheer neglect, lack of knowledge, or both, it’s clear that Boulder residents aren’t taking enough responsibility for the ecological footprint of their pets. If we want to continue enjoying the physical and psychological benefits of pet ownership, we need to stop making exceptions for the animals we love. By protecting the earth now, we can ensure that people and pets continue enjoying one another’s company for generations to come.

Each of these households spends $500 annually on pets. (Sources: Chapman University)

Dog waste harbors parasites like Giardia and E. coli, which can comprise as much as 20% of the pollution in public waterways.

There are 90,000 dogs in Boulder county, which accounts for 11,700 tons of poop per year.
(Sources: Keep it Clean Partnership)