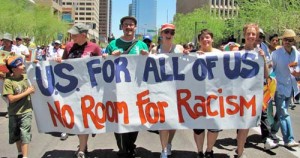 Let me start by saying I’m a white middle class cis woman so everything I say here is coming from that experience, and will have certain biases. In other words, I am kin to a lot of you.

I have always been interested in race and racial issues. When Michael Brown was killed in August of 2014, I broke somewhere inside and got active in a way I wasn’t prior. I won’t go into those details except to maybe equate it with how you may have felt watching Donald Trump become President; it turned my world upside down and I started to get “woke.” It seems a lot of us are in the same raft right now, so I wanted to say “Welcome! And, listen for a minute, we need to talk about something”.

I feel the passion and desperation of people who are realizing the need to act now. Many of us thought we understood how things worked and loosely assumed what the future held. Suddenly all of that seems shattered, everything more questionable today than it was 6 months ago. There’s a frantic scramble to challenge the new administration and it’s tough to know where to put our focus. For many white folks, the need to fight racism may not be at the top of the list.

I am here to ask you to question that.

I believe it is vital that we all start digging deeply into race, our own racial identity and responsibility, for the United States to stand a chance at moving into a future where every person has the safety and opportunity to realize their human potential. Trump is president due to white folks. Literally, we as a group, voted him in. The economic, political, geographic and cultural divide between white folks is as old as Europeans immigrating here. Land-owners used poor whites as indentured servants and then exploited them to abuse slaves, constructing race and racism to create a hierarchy of importance. Today, we are all complicit in ensuring this system stays alive through wage, housing, wealth and health disparities. Until we see how we contribute to these systems and get critical about ways to dismantle them, we may get rid of Trump but will elect another version of him tomorrow.

In addition to self-education and taking action as an individual, I also became a member of Showing Up For Racial Justice (SURJ), which was formed to move white folks into action for racial justice. This means that we dig into issues like white privilege and characteristics of “whiteness.” That work is an ongoing process. And we take action. When it comes to community organizing for racial justice, we often take our own initiative to challenge white supremacy where we see it, but we also connect with organizations led by people of color to ensure that we’re working on the things that are most important to the groups that are disproportionately impacted.

We talk a lot about decentering whiteness. We believe this is central to overcoming white supremacy. We know “our” story is sold as the “American” story.  We all know the stories of the “Founding Fathers” and “American values.” We have internalized ideologies about success through the stories told on TV, in history books, and in our families. They are inevitably based on white folks being heroic. Success is often measured by education, employment and material goods.

How do we change these stories? How do we relearn our lives and history where the central players of the “American Dream” and narrative are not us, but the lives of people of color? How do we honor their stories and values which hold the key to changing our oppressive systems and saving us all? How do we lift up these lives as central and the “American” story, rather than a side lesson in history which functions to “otherize” people and cultures. This isn’t about accommodating or being politically correct, it is central to our survival.

The question of how is one I pose to myself everyday and am asking you to do the same. Where in your life and throughout your day can you promote and amplify voices and leadership of people of color?

The irony of a white person writing this article rather than referring it to a person of color is not lost on me. I have no idea if it was the right choice. But, these are the questions we should be asking with every decision we make and be open to criticism.