In the Cups: Liquid Cacao Gets Boozy

Boulder’s Cholaca, an organic liquefied cacao, began in 2012, and spent its early years getting into bakeries, cafes and eventually supermarkets. Then, about 18 months ago, brewers started calling Cholaca CEO Ira Leibtag for 32 oz. bottle samples, but never provided feedback. “After about 2 or 3 times,” Leibtag said. “I call up these guys and asked, ‘So what are you doing with my stuff?'” He learned brewers were using Cholaca the same way they used chocolate nibs or powders. Leibtag suspected that was a problem.

Traditionally, chocolate nibs or powders are used to extract flavor during fermentation, which is where the chemical reactions occur. Since Cholaca is a finished product, subjecting it to those chemical reactions for weeks resulted in discoloration, inconsistent flavors and plenty of gunk at the bottom of the tank. “By liquefying the cacao and emulsifying it with water, we’ve given brewers the opportunity to add Cholaca during the brite process,” which Leibtag said, “creates an enhanced flavor as opposed to an extracted flavor.”

Brewers soon found this method was more efficient in flavor extraction and cleanup, making it a cost-effective boost in quality. That win-win for brewers created demand, and a major pivot for Cholaca’s business model. Leibtag set aside a push in the consumer market to address the wholesale demand from bakers and brewers. “I try to take my ego out of the equation,” he said. “When we have a demand like this, we aim to see if we can’t help that out. Why not? The good news is we’re nimble, and can move quickly.”

The demand in its beer segment jumped 300 percent from 2015-2016, according to Cholaca. Among the 30 breweries that used Cholaca last year were smaller outfits like Lafayette’s Liquid Mechanics and the much larger Breckenridge Brewery, which won acclaim with its seasonal Nitro Orange Stout. Beyond Colorado, regional brewers like Bell’s and Tröegs have enlisted the ingredient into porters and stouts.

When Tim Matthews, head brewer at Oskar Blues called, he was already on the right track with introducing the cacao just before carbonation. There was still one hang-up, though. After a week of pouring 32 oz. bottles of Cholaca while standing on a ladder above the brite tank, Matthews requested a bigger portion. Cholaca responded with 50 gallon drums that could be pumped into the tanks. The end results came out in the brewery’s highly-regarded Death by Coconut, a semi-sweet porter mixing Cholaca’s cacao and caramel malts.

Leibtag began as a baker and he decided to let brewers, whom he likens to artists, figure out how best to 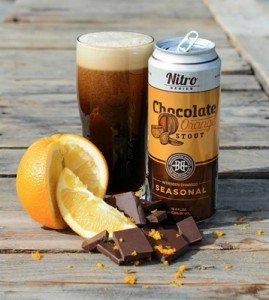 use his ingredient. Yet when it came to cacao, he had to speak up. “They do these amazing things, and they have such an amazing attention to quality… and then are putting in Hershey’s-grade chocolate.” He considers his cacao some of the finest on the planet, and some of that consistency comes from the company’s sustainable sourcing. The cacao comes from farmers and co-ops in Ecuador and Peru that practice regenerative farming.

Leibtag is looking beyond beer for ways to introduce his liquid cacao into spirits and sodas. “Opportunities are like a bus,” he said. “You can choose to get on that bus or you can watch it go down the road. That’s about as long as it lasts. You have to make decisions and go with them.”