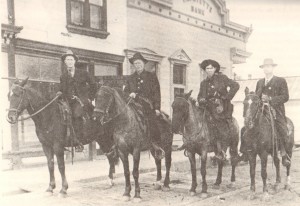 The towns and cities of Colorado’s coal fields were forever changed on April 1, 1910. That day was the beginning of the Long Strike. No one could have imagined the scope of the strike, as weeks turned to months and finally to years. It was a period of immense hardship and unprecedented bloodshed in Colorado’s coal-mining history.

Coal miners were only paid for digging coal. Laying down track for mine carts, or installing support beams to prevent rockfall, was considered “dead work” that a miner did for free. This led miners to avoid safety practices which might eat into their paid work, and ultimately to thousands of deaths each year. When a miner was killed at the Standard Mine, south of Lafayette, three of his co-workers were fired for taking a day off to attend his funeral.

The city of Lafayette, and its founder, Mary Miller, had proven resilient in its early years. A widow with six children, Miller was the first woman in history to become president of a bank. Growing pains, coal strikes and a major fire had tested Lafayette, and it persevered.

During the Long Strike, Miller and other Lafayette business owners extended credit to coal miners in Lafayette. Families needed to be fed and houses needed heat. Strikes were a common occurrence in Colorado’s coal fields, and these loans were a way to sustain the community through hard times.

The efforts of Miller, and other Lafayette businesses, likely saved the lives of more than one coal-mining family. However, the Long Strike lasted five years and forced her bank into ruin.

As the Long Strike wore on, violence spread. In Lafayette, town marshal and union member Teddy Wycherly was “literally cut to pieces” by non-union miners. In Superior, coal miner “Dude” Searcy, brought in to replace striking workers, was accosted by picketers, and died in a shootout with police. In Louisville, union miners attacked the Hecla Mine and a shootout with mine guards resulted in one death.

The true horrors of the Long Strike occurred in the town of Ludlow, near Trinidad in southern Colorado. On April 20, 1914, over twenty people were killed, when mine guards and state militia set fire to Ludlow’s tent colony. Many of the dead were women and children.

The violence and hardship of the Long Strike yielded few benefits to coal miners. Mining companies continued to pay their workers poorly and mines remained unsafe. It was not until 1927, at a coal mine between Lafayette and Erie, that real change would come to the Northern Coal Fields. But that’s another story.