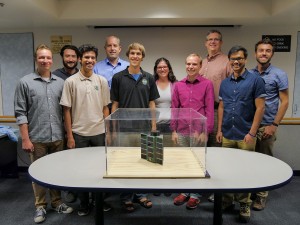 Photos of the team that helped build the QB-50 CubeSat at CU Boulder. (Photo by Glenn Asakawa/University of Colorado)

RTD now provides real-time updates for its trip planning Next Ride program: rtd-denver.com/app/nextride. Lafayette has appealed a Boulder judge’s ruling which denied their claim for a “buffer” property along Nine Mile Road. Businesses can help make Boulder County more bike friendly and attract two-wheeled clientele by offering parking. BoCo businesses can get up to five free bike racks, and advice on where to install them, from Partners for a Clean Environment (PACE) by calling 303-786-7223. A woman trapped under a 1,500 boulder at North Table Mesa in Golden was rescued and evacuated after hours of effort by first responders. Rescuers freed the woman using a hydraulic machine and then hiked her up to the top of the mesa for helicopter transport. Bill O’Reilly was pushed out of Fox News after details of his sexual harassment settlements came to light. Hope you like ‘targeted’ web ads: House Republicans struck down an FCC broadband privacy rule set to take effect later this year. The rule would have prevented internet service providers from using and selling web browsing data. Neil Gorsuch’s nomination to the Supreme Court fell six votes short of the needed 60 votes, marking the first successful filibuster of a court nominee in nearly 50 years. Republicans used the “nuclear option,” changing the rules to a simple majority requirement and approved Gorsuch. The U.S. launched more than 50 missiles at a Syrian airbase days after the country used chemical weapons on civilians. Russia ended its cooperation with the U.S. in the area. North Korea… we’ll see. And now the presidential summary: Trump could not get the Republican-controlled Congress to pass Paul Ryan’s health care bill. Ivanka Trump has an office at the White House, but won’t technically hold a job there. However, she will be a private citizen privy to confidential business and security conversation. Steve Bannon was removed from the National Security Council, and replaced by Rick Perry. Trump can still withdraw and distribute income from the trust whenever he wishes and refuses to disclose his taxes despite making it a repeated campaign promise. Trump approved the Keystone XL and Dakota Access oil pipelines. Keystone will import Canadian tar sands to Texas, though in the current market there will be motivation since they require more processing. In fact, Exxon “de-booked” those assets, roughly 3.5 billion barrels, but could reverse course upon completion of the pipe.

Words coming back to haunt:

“”Most honest people I know are not under FBI investigation, let alone two.”
—Kellyanne Conway tweeted Oct. 28, 2016 in reference to Hillary Clinton.

“It seems to be, and correct me if I’m wrong here, but virtually every case of voter fraud I can remember in my lifetime was committed by Democrats.”
—Steven Curtis, former Colorado Republican Party chair and local AM radio host, who allegedly forged his wife’s 2016 mail-in ballot.

“When you are given immunity, that means you have probably committed a crime.””
—Mike Flynn, talking about Hillary Clinton’s staff before the election. He requested immunity while under investigation for his ties to Russia.

“If I’m POTUS I don’t think I’d see any of my golf courses again, I just want to stay in White House and ‘work in my ass off’”
—Donald Trump tweeted during his campaign. He’s golfed at his own properties nearly every weekend since the election.

$10,000
Donated by Boulder to a new fund for undocumented University of Colorado students.