Spotlight: It’s Times Like These We Need Flobots Most 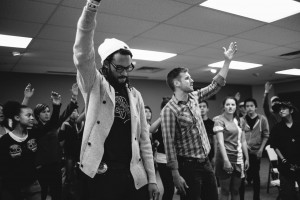 “Our default is complete freedom.”

There’s a lot in that simple statement from Flobots MC Johnny 5 (a.k.a James Laurie). In context, he was talking about the way the Flobots has always approached making albums — free from studio meddling. But there’s a greater meaning here that applies directly to the band’s new double-album release NOENEMIES, dropping May 5. The first half of the effort is a slick studio album with plenty of production featuring plenty of guests on horns and strings. The second half is a recording of regional protest songs from around the country. You know, the stuff freedom was built on. Funded entirely through a Kickstarter campaign that blew way past the original ask, NOENEMIES is a significant undertaking. Here, Laurie, talks about learning the language of the protest song, living in a deeply divided world, and working with Wonderbound, Denver’s contemporary ballet company.

French Davis: Your last album came out in 2012. A lot has changed since then — locally, nationally, internationally. How about with the Flobots?

James Laurie: A lot has definitely changed since 2012. But In some ways it’s only a matter of scale. In 2008 when we wrote Fight With Tools (Universal, 2007), there was a sense that a generation was waking up from the warmongering policies of the Bush administration. In 2011, you had the Arab spring and the Occupy Wall Street movement. Then of course, in the last few years we’ve had Black Lives Matter. It’s been interesting to watch the very idea of “waking up” become so widespread that “woke” is now a commonly used term. And now with the new administration, a new wave of people taking to the streets has stirred an ever-more widespread appetite for protest culture. For us, the question remains the same. How do we use our music to speak to inspire positive transformation? And the answer is the same: we have to reach people deep down — in unexpected, visceral ways.

FD: Tell us about NOENEMIES — the cuts you chose, the recording process, the messages you’re sending on this one. It’s a two-album project, starting with a collection of new music and then a collection of protest songs, right? Why lump this altogether?

JL: NOENEMIES came about through a very long process. For the first part of the process, we didn’t even realize we were making an album. We thought we were answering a question. A mentor of ours, Vincent Harding (social activist and Professor of Religion and Social Transformation at Illiff School of Theology in Denver — ed.), had always encouraged us to think more deeply about what “protest music” really meant. He emphasized to us that the southern freedom movement was a singing movement. People had songs that they knew, and they could sing them while they marched. “But where are the songs for today’s movements?” he would ask us. He honestly asked us that for like, 10 years in a row, and I don’t feel like we ever seriously tried to answer it. We hoped that listening to Fight With Tools might get people to go to a march, but we knew that once they’re there, it’s not like the whole crowd is going to start singing “Handlebars.”

Then in 2014, Dr. Harding passed away. It was kind of sudden and unexpected. At that point, we realized we had to try to answer his question. So we began gathering people from our community to try to sing songs together that could be used in marches and rallies. We did this over and over and over, all around our state, and even all around the country. We discovered that it wasn’t that hard to come up with songs that everybody could sing. Friends of ours who were part of marching bands started joining in. We developed a repertoire of “Common songs.”

And then we realized, hey, in creating this common culture, we’ve been cultivating the soil from which we can grow our new album. So, while the album contains very beautiful and polished studio tracks, with lush strings, horns and a vibrant gospel choir, those tracks were inspired and grown from all of the work we did with collective singing at the grassroots level.

It’s important to us to link the two: songs from the studio, and songs for the streets. Both of them are powerful in very different ways. The studio songs are like sculptures, finely crafted in a very specific way, and they live on the album you can buy. The songs for the streets are like stories that can be told and retold, altered and amplified. They live wherever a group of people are gathered to sing them.

FD: The entire cost of the album was funded by your Kickstarter campaign. Your goal was $50,000; you guys eclipsed that. When did you first decide to go this route instead of working with Shanachie again or another label?

JL: Of the three albums we’ve made, we only made one while we were actually on the label. Fight With Tools was made on our own, before Universal decided to release it. We made The Circle in the Square (Shanachie, 2012) completely on our own as well, and then began talking to labels. Our default is complete freedom. We knew that there was only one way to have that freedom: going directly to the fans. Taking that leap of faith was scary, so when people embraced the idea and lifted it up, it felt wonderful! At that point, it became very exciting because we knew that the only people we were beholden to were those people who truly care about our music. It made us want to create the best possible album we could imagine.

FD: Talk about the grassroots experiences you had collecting your protest songs — the different groups and places you went to collect them all.

JL: For our NOENEMIES project, we assembled people in a huge variety of settings. Sometimes it was climate activists in a church basement preparing for a march against the Keystone pipeline. Other times it was a retreat of national leaders of immigrants rights groups, sharing bilingual songs of empowerment. But it wasn’t always overtly cause-oriented. We took three weeks to travel the state of Colorado, visiting tiny rural communities and places we’ve never even heard of before, and asking people, What are the songs of your community? What is the emotional state change you would like to see here? We experienced some amazing answers. And even more amazing people. From the Southern Ute powwow to a hootenanny with cowboys in a town called Joe’s Colorado, to a singalong in a five-story-tall empty water tower in Rangely called The Tank where every note reverberates for 30 seconds, we found that immersing ourselves in real communities with real people helped keep us grounded in the music we were writing.

D: When you first started this project, I’m guessing you had no idea we’d be looking down the barrel of a Trump administration. How does that impact your feelings on this project, as you get ready to release it on Cinco de Mayo?

JL: We wrote this album with no idea that Trump would win. But at the same time, we knew for certain that the country would feel divided after the election. We knew this because it was divided before the election. And we know these divisions come from the way we consume our media. The internet’s current business model is to feed us information that supports our worldview. This means caricaturing and the scapegoating people with opposing opinions. The algorithms make us into enemies. So, we knew that, regardless of the election outcome, NOENEMIES would be both relevant and necessary.

FD: You’ve been touring around the state performing your new material with dance troupe Wonderbound in a show called Divisions. Can you tell us about that project and what the experience has been like?

JL: Two years ago, when we were in the middle of the album, our friends at Wonderbound ballet asked us if we wanted to partner for their spring 2017 season. We were like, that’s two years away, and we have no idea what will be doing then, but sure. It turned out, the album took way longer to finish than we thought, so the timing was perfect. We finished the songs just in time to hand it to the folks at Wonderbound and say, have at it! We also created the ballet’s title about nine months ago. Since the album spoke to the aspirational side of things, we thought we’d go the other direction with the ballet. Hence, Divisions. Divisions reflects the reality we are immersed in right now. Or at least the story of that reality. Working with a ballet to bring a hip-hop album to life is truly a powerful experience. We’ve done a lot of collaborations during our career, but I don’t think any of them has been as in-depth, or creatively fulfilling as this one. People should definitely not miss this.

FD: The national spotlight on Colorado music is definitely brighter now than ever. When you look around, what do you see that inspires you here?

JL: What’s beautiful about the music scene here, is the way that so many people support one another. Across genres. And across projects. So when Natalie Tate performs, there are members of Chimney Choir performing with her. Or when Nathaniel Rateliff and the Night Sweats blows up, you’re looking at some of the most talented and hard-working Denver musicians, all of them with their own history of projects they have poured themselves into over the years. Beyond that, it’s also been amazing to watch musicians step into new roles.

At Youth on Record, the organization we co-founded back in 2007, musicians from the community use their talent to help young people unlock their own tools for self-expression. That creates a positive feedback loop. As part of our NOENEMIES project, we’ve been joined by dozens of musicians who wanted to use their talents to lead songs in the streets. From the Gora Gora Orkestar, to Dan Aid from Wiredogs, to Laura Goldhamer, to Kid Astronavt, it’s really exciting to see.

Then you have groups like the Colorado Children’s Chorale’s 303 choir, who have been constant partners with us through this whole project, reminding us that whatever message we put out there, we’re putting it out there to the next generation. That has helped us remember to trust our listeners, and never assume that we have the whole story.

Finally, in this current political climate, it’s beautiful to see bands using their power to help defend communities who are being targeted. Several weeks ago, Nathaniel (Rateliff) and the Night Sweats performed a fundraiser at the Ogden to benefit Project Worthmore, a group that works with refugees, who we have close ties to. They didn’t have to do that, but they stepped up and did it. And so did Devotchka. And Joe Sampson. And Gora Gora. And we even snuck in a some Flobots songs.

Musically, the night was off the hinges. And we raised about $40,000 to go towards work with refugees. Stuff like that gives me hope. 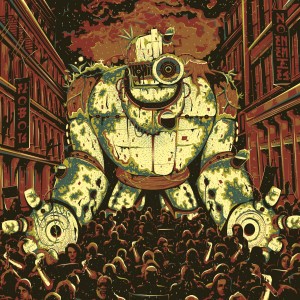 The Flobots fourth studio album, NOENEMIES drops May 5, 2017, available for purchase at www.flobots.com. In celebration of the release of NOENEMIES, Flobots and Denver’s Wonderbound dance company will partner for a unique live performance collaboration – DIVISIONS. Set to Flobots performing live renditions of songs from NOENEMIES, DIVISIONS promises an intimate first encounter with Flobots’ brand new music, and an immersive exploration of the power of collective movement. DIVISIONS opens with three shows at Denver’s Performing Arts Complex at Pinnacle Charter School (1001 W. 84th Avenue) on April 14, 15 and 16, moves to the PACE Center (20000 Pikes Peak Avenue, Parker) on April 22 and 23, and then to the Newman Center for the Performing Arts (2344 East Iliff Avenue, Denver) on April 29 and 30. Get complete DIVISIONS details and purchase tickets at wonderbound.com.