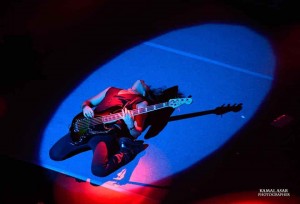 Boston’s muscular rock successfully infiltrated mid-to-late ’70s hit radio with equal parts testosterone and hooks. A slew of material from their 1976 self-titled debut has long been recognizable on radio, including the riff-ridden rocker, “More Than a Feeling.” The group, including vocalist Brad Delp and guitarist/multi-instrumentalist Tom Scholz, went on to release Don’t Look Back in 1978 and Third Stage eight years later. Third Stage boasted “Amanda,” “We’re Ready,” and “Cool the Engines,” three of the best mid-’80s rock tunes to rear their guitar-loving heads. The band was appropriately welcomed back. The group’s latest, Life, Love & Hope (2013) features Brad Delp’s vocals on a few of the tunes; a nice tribute to the powerhouse vocalist who sadly passed away in 2007. It remains to be seen if MIT grad/musical equipment genius Tom Scholz and company release a follow-up album. We caught up with bassist Tracy Ferrie while on a performance-free travel day from the band’s rigorous road schedule. The roller skating pro and former Stryper bassist couldn’t have been nicer.

Yellow Scene: What was it like when you got the Boston gig?

Tracy Ferrie: It was very unique in the fact that I didn’t have to audition [laughs]. There are all these bands across the United States and then you move to Nashville and there’s auditions every week or so for someone if you’re not on the road. I’ve done well in some auditions and some not as well; some of the ones that I didn’t do so well, I ended up getting the job. But Tom [Scholz] called out of the blue with his low-tone voice, “Tracy, would you like to go on tour with Boston?” I said, “Of course I would.” Who wouldn’t?

YS: I understand there are some cool new special effects on the current tour.

TF: Last tour – the 40th anniversary – we started this lightning effect that was just on top of the amps. Tom [Scholz] built it in his garage. I spent a night or two over there, cutting the LED strips. They are very bright; you have to use a special voltage. We soldered and cut tons and tons of wire just for that one panel I worked on with him. There’s several dozen panels up there now, so he really took a lot of time to do it. Now some of those lightning effects are on our guitars. There’s a point where the guitar, at this crescendo, goes over to a touchpoint and causes the rest of the lightning to chase up the drums and over the amps. It’s really cool. It takes a lot of practice, ‘cause I actually have to play these solo parts that we worked out. I’ve got to play, hit pedals and hit this one spot where the lightning touches and then I’ve got to hit more pedals. It’s a dance.

YS: Have you worn roller skates on stage with Boston?

TF: No, but I would certainly entertain that idea if it ever came up. A lot of fans and a lot of interviewers have asked that question, but I’m never going to bring it up (laughs). Let me tell a funny story I think you’d enjoy. Just the other night – I’ve got a lot of funny, goofy moves as the night goes on — I’m doing my little thing across the stage. Gary [Pihl, guitar/keyboards/backing vocals] is looking at me coming toward him and he’s got this smile and he’s laughing. I’m like, “Come on, Gary. You’ve seen everything I do.” After the show, he goes, “What I was laughing at is Tom [Scholz] was coming behind you; he was mimicking what you were doing.” He’s like a foot taller than me, so it must have looked like this giant shadow (laughs). So, last night, I caught him doing that. I turned around and I’m like, “Gotcha!”