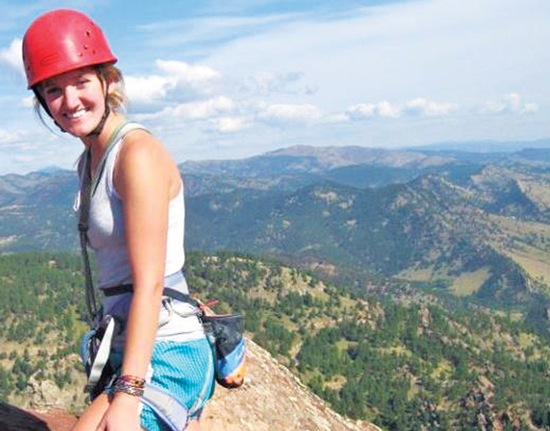 I don’t climb. I’m not a climber. I would describe myself as a lot of things: a young professional, a skier, a Beyoncé fan, a beer drinker, a bookworm, a bike lover. “Climber” is just not on the list. I don’t care that I’m not a climber, but it’s this time of year that I find myself at barbecues, shaking my head in general bewilderment as people passionately “talk rock”.

“I sent Jerry’s Nipple up the canyon on Sunday!”

“Yeah! There was a textbook jug at the crux, but I threw a double mono dino and topped out.”

At this point, these people high-five and I am not sure if they are talking about rock climbing or live action role-play.

Every summer, for the last eight years, I say “I should climb more often this summer.” I go out to some sport climbing area, I strap on my hardly-used shoes and harness that was a friend of a friend’s and I shimmy up some rock wall. But alas, other than time outside and the shoulder workout, it doesn’t do much for me. For a person living in New York City with friends who bleed fashion, this is not a problem. But for me, a person who lives in Boulder, Colorado with friends who live for climbing, it can be.

Seasonal changes in Colorado are when people shift over to their “other” sports, thereby shifting into their other selves. Entire tribes and groups of friends reconfigure based on a mutual. You hang out with your fellow runners and skiers and climbers and bikers and anglers. For instance, there is a guy I don’t hear from all winter until it’s time to mountain bike. The day the trails dry up, we are best friends. Come November however, he could die and I probably wouldn’t even know. Or even care…until mountain bike season started up again.

In late spring, I put away my skis and to pull out my mountain bike and running shoes. I like to watch the tan that has been limited to the lower portion of my face slowly spread across my chest, arms and legs. I like driving home in a sports bra after a long ride with the windows down. I like warm evening runs under a pink sky.

Biking and trail running, like skiing, offer quick movements, cardio and adrenaline. Things I look for in most of my outdoor activities. I’ve heard there’s adrenaline in climbing, but to me, that’s like hearing “Orlando, Florida is a beautiful city” or, “Tom Cruise is a great actor, despite his insanity.” Other people may see it, but I don’t.

The actual problem with climbing could just be that it refers to its objectives as “problems”. Or that climbers talk about finding “good rock,” which obviously sounds troubling to an outsider. And all this lingo about “red point” and “pink point” and “dead point.” What’s the point?

I know every sport has its jargon. I’m a skier for heaven’s sake. I say “sent it” and “face shots” and talk about gear like it’s gold. So, it may be that the hard time I have with climbing is just that, a hard time. Climbing is hard. And like golf (from what I hear, because I don’t play golf), to be good at it you must work at it. You have to get out and climb. That’s the nature of most outdoor activities: they take time. Sports are scary and sometimes lame until you familiarize yourself with their intricacies.

Last Labor Day I tagged along with some friends to Ten Sleep, Wyoming, home of over 800 bolted routes. “Heck,” I thought. “I’ll do some camping, sit in a canyon, drink some boxed wine, and spend time with friends I haven’t seen this summer because they’ve been too busy climbing.”

I completed a couple 5.8s and 5.9s and gave a solid go on a 5.10 over the course of a few days while my friends scurried up multiple challenging routes per day. We threw a rave under our canopy tent, cooked delicious food and I watched my girlfriends utterly crush the climbing game. I belayed my best friend as she cursed, clawed and lead herself up a 5.10c, taking a solid whip along the way.

She trusted me to catch her as she passionately and methodically pushed herself up this wall of rock. It was impressive and inspiring. And maybe even a little exciting.

People getting jacked up on their sports and giving all they’ve got is a beautiful thing, no matter the activity. Like that speed walker in the Olympics who pooped his pants while competing and still finishing eighth place. That’s skill. That’s commitment. That’s passion.

In the end, my trip to Ten Sleep didn’t necessarily get me stoked on climbing, but it got me excited about getting excited about something. It motivated me to charge steeper trails on my mountain bike. To take more challenging lines on my skis. To run faster and further. I’m not a climber now, but maybe this summer will be my time. So, here it goes again: I should climb more often this summer.

View all posts by Jessi Hackett →