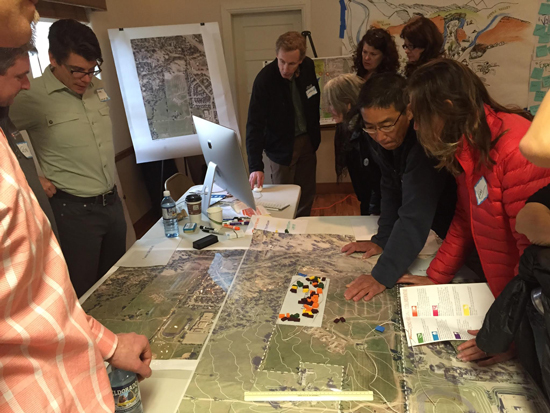 IF YOU LIVE OR WORK IN BOULDER, you probably don’t think twice about your daily driving woes. But gridlocked roadways and pricey parking aren’t meaningless frustrations. They indicate that our population and living costs are soaring — and that we’re divided on what to do next. So where do we go from here? It all starts with the Transportation Master Plan.

When the plan was first drafted in 1989, its core goals were to decrease single occupancy vehicle travel and increase citywide access to walking, biking, and public transit. Today, city bus ridership has more than doubled and 26 percent of Boulder residents live in walkable neighborhoods. The future envisioned by the transportation plan has in many ways come to life, but a number of challenges prevail.

Anyone commuting into Boulder for work can tell you, the city is full. A 2016 traffic study revealed that approximately 49,000 vehicles enter Boulder during the morning rush. And, the percentage of these people who drive alone is the same as it was 28 years ago. Besides causing congestion along the US 36 corridor, this exacerbates existing parking and air quality issues within the city limits. To manage this influx, the city’s Transportation Master Plan established an aggressive target: reduce the amount of single occupant trips by residents to 20 percent by 2035. That means putting more commuters on buses or in carpools.

Leading Boulder towards this goal is GO Boulder, a division that works to increase multi-modal travel. According to GO Boulder’s transportation planner, Randall Rutsch, the best way to change travel behavior is through transportation demand management (TDM). TDM is one of the five policy areas of focus in the master plan, and it includes strategies like the EcoPass, secure bike storage and flexible work hours. Paid parking is also considered a TDM program because it encourages alternative modes of travel. This hit-them-in-the-wallet method requires a building’s employees or residents to buy a space if they’d like to park there. “We do know that paid parking is a big disincentive, and part of what it does is make the cost of using the single-occupant vehicle more transparent,” said Rutsch.

Everyone benefits from programs that try to mitigate demand and offer more travel options. But as federal budgets shrink, Rutsch noted the importance of alternative funding sources. He said that more funding could come from a vehicle miles traveled (VMT) tax. This innovative tax charges drivers based on their travel frequency and promotes more sustainable behavior. CDOT has a small volunteer test program to see how such a tax would work. Colorado drivers currently pay a flat gas tax of 22 cents per gallon, but raising that tax requires legislative approval. Since raising a tax is unpopular politically, the gas tax has been left unchanged since 1991.

A significant amount of Boulder traffic comes from inbound commutes, and for decades, roughly 80 percent of those have been single-occupant vehicles. It has been hard for planners to cut down on that number, especially since it requires coordinating with different municipalities.

For Boulder County, where driving is more common, transportation goals have focused on decreasing car use and increasing multi-modal transportation. Gerstle said one such success has been the expansion of bus services that make it easier to forgo driving. “We have worked with the city of Longmont to successfully implement the RideFree Longmont program that has tripled ridership on the local buses,” he said. “Similarly, we have worked with RTD to increase the BOLT bus service on the Diagonal, and the JUMP service connecting Erie, Lafayette
and Boulder.”

From further away, a new FLEX bus service also connects Boulder to Fort Collins, making it possible to take public transportation from CSU to CU.

City planners in smaller areas have tackled congestion problems by testing out universal passes for residents. In Nederland, an EcoPass pilot was so successful that voters supported taxing themselves to make it permanent. A community EcoPass has also seen success in Lyons, which is exploring additional funding options to sustain the program. Lafayette voters, already served by buses from Denver and Boulder, turned down an EcoPass initiative on the
November ballot.

the rent is high

Since much of the county’s roadway congestion is a side effect of the city’s high living costs, one solution is to create more affordable housing in Boulder. According to community advocate Eric Budd, this can be achieved by transforming existing homes into affordable rentals, like housing co-ops. “The idea behind the cooperative house is to make allowances within the existing framework of occupancy limits, which typically in residential neighborhoods, will not allow more than three unrelated people
living together.”

Budd has spent the last three years working to expand Boulder’s cooperative housing options. He explained that since co-ops often buy bulk food and cook together, they use less water and energy than single-family households. They also provide affordable, short-term living arrangements — but these too are challenged by zoning laws. Budd was a major proponent of the co-operative housing ordinance passed last January, which sought to increase Boulder’s occupancy limits for cooperative living. Having earned approval from city council, the ordinance now allows for around 10 co-ops to be licensed each year. In the community’s low-density zones, cooperative occupancy is capped at 12.

This win represents what can happen when we include more voices in important infrastructure decisions. Like Budd pointed out, many of the people most affected by affordable housing policies are absent from the conversation. “If you attend any of the public meetings, it’s very rare that you’re getting younger people or people that rent involved in the conversation — those are important voices that we need to be considering.”

Those who’d benefit from affordable housing policies should have a say in decisions that affect them. But this demographic is often comprised of people who are busy, hardworking and bootstrapped. Is it fair to expect them to show up at town hall and fight for their right to fairly-priced homes?

Danica Powell, owner of real estate consulting firm Trestle Strategy Group, doesn’t think so. That’s why when Powell works on an affordable housing project, she often visits these communities and gets to know them herself. “By walking the site with these people and talking with them in their neighborhood, I’m really trying to break apart these contentious, big community
meeting settings.”

Powell’s community approach coincides with a greater shift towards more inclusive city development. In Seattle, officials are battling a housing crisis by breaking down barriers to civic engagement. The city created a number of community commissions — which are comprised of low-income residents, renters, and the homeless — to advise neighborhood development.

Establishing a more inclusive planning strategy would ensure that the people who already work in Boulder still have a place to live. Powell stressed that it also reflects who we are as a community and who we want to become. “We all benefit from the teachers and the police officers and the people who work in the city. They’re part of our community. If we can’t retain employees or attract the wage earners, what happens?”

If you’re wondering what it looks like when housing is designed with transportation in mind, look no further than Boulder Junction. Built atop a neglected industrial site, Boulder Junction is transforming into a thriving mixed-use space and a prime example of what walkable, mixed-use developments should look like.

Here, all parking is paid and managed, and it’s the city’s only establishment with a parking maximum (one parking space per dwelling unit). The development also provides immediate access to bus services and the Goose Creek bike path.

Alongside designated commercial spaces and a number of market rate apartments, Boulder Junction also includes 71 permanently affordable housing units. Mixed-use spaces are a creative way to meet some of the city’s most pressing transportation and housing goals, but at the same time, land use codes, low density zoning laws and other policies halt further affordable housing progress.

Boulder’s high cost of living continues to force people out, causing an avalanche of transportation and housing obstacles. Now, it’s on the verge of becoming a place that’s open only to the most fortunate. That’s why we must ask ourselves: what do we as a community value most? If it’s equality that matters, we must better incorporate diverse needs and interests into city growth plans. Boulder’s ability to unite around its values will ultimately determine what kind of place it becomes.

View all posts by Michelle Polizzi →