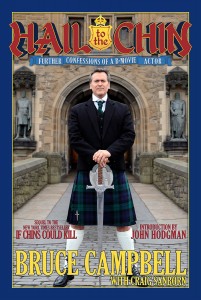 He’s the every-man actor who has risen to the top of the B-movie landscape. From his legendary portrayal of Ash Williams in the Evil Dead series to his roles on myriad television shows like The Adventures of Brisco County Jr, Jack of all Trades and, most recently, Ash vs. Evil Dead on Starz!, Bruce Campbell has proven he can lead a cast and take on just about anything thrown at him (including copious gallons of fake blood.)

He’s also an accomplished author, as witnessed by his autobiography, If Chins Could Kill: Confessions of a B Movie Actor, and his second book Make Love! The Bruce Campbell Way. Now, you can get his latest book titled Hail to the Chin: Further Confessions of a B Movie Actor, which picks up right where the first autobiography left off. I recently caught up with Campbell, who is touring the country promoting his book and the upcoming third season of Ash vs. Evil Dead.

Deb Flomberg: Hail to the Chin is your second book — but I understand it’s planned as a trilogy? Can you tell us more about that?
Bruce Campbell: Well, I’ll tell you more in 15 years when I do the final confession. In about 15 years from now, I’ll be in my mid-70s, it will be rocking chair time, I can look back. That’s the plan.

DF: Looking back over your very accomplished career, what stands out to you as the most personally rewarding?
BC: Bookseller. Because as an actor, you’re not always considered smart. As a bookseller I get more credibility. Plus, there aren’t as many chefs involved when you’re writing a book. But if you make a movie and you spend, say, 200 million dollars, guess what? There are going to be a lot of people with opinions — very strong opinions of what stays and what goes. They’re going to market it and check to make sure people like the movie. It really has become a big deal, so the creative side of movies can often become snoresville, and good or bad you know, you go, “well, that’s kind of what I wanted.”

DF: What do you think most people don’t understand about fame?
BC: Well they assume that you’re instantly rich. And money just comes with it, it’s like a club – if you get in the same club, it’s like there you go; here’s your million dollars a year. I had a disgruntled fan out on the streets of Philadelphia once. I had done an event and I was there for hours. And there are always the guys who won’t wait in the line and think, “I’m gonna wait outside and get him when he goes home.” And when the event is over, he starts accosting me and I’m like “Dude, I’m done. I’m done. I did that. I made myself available.” He goes “You bleepity-bleepity bleep,” and he points to me, “you make millions of dollars a year!” like I owed him. So I think that’s the biggest mistake — that we owe anybody anything. I act. You buy or rent. That’s it.

DF: I’ve got a big personal connection to Evil Dead the Musical, as I’ve directed it twice. How do you think Ash’s saga translates to stage?
BC: Make sure you utilize the splatter zone – that blood needs to fly 15 – 20 feet. That’s my only requirement. Find the guy that’s the biggest idiot in the audience or anyone who is heckling and you let them have it. You cover them in blood. The stage crafting is probably the biggest challenge of that whole play. How do you chop limbs off live? You know what’s great about that play? You can’t lose. If you do it off Broadway – I saw it off Broadway – it was really slick, with these very polished actors and it was funny and it was a good time. Then I saw it in Bend, Oregon, and it was the opposite. They had no money to do anything. The guy was 15 feet away from me and I couldn’t hear his singing voice, it was like Ash Blonde. You know what I mean? I had to hold my hand over my mouth. Like before someone got their hand chopped off, backstage you’d hear “wrrrrrrrrr (machine noises)” and there was a 10-second delay between the axe hitting them and the blood spurting, and I basically never laughed harder in my life, you really can’t lose with that play.

DF: What about some of your other films? I’d love to see Bubba Ho-Tep the musical.
BC: You could do that one, that would have to be almost operatic because of Elvis. That’s a good one actually, because you’d have to have a guy who could basically do very credible singing on top of everything else. That’s a good one. I’ll give you 5% of it.

DF: Why do you think Evil Dead still resonates with fans, 40 years after the release?
BC: It’s just the little movie that could. A little teeny movie made in Michigan — where you don’t really make movies. But we got the endorsement of Stephen King, the great horror author of all time, and we beat The Shining on video. It was in England in 1983 and Evil Dead was the #1 video of the year — so we beat them. It’s the little movie that could with the lead guy who’s just an average guy. He’s not a navy seal, he’s not from another planet and he doesn’t have any special skills so maybe the average viewer can go, “oh that’s just like me.” But who knows? I don’t know.

DF: Looking back at some of your other performances — when you’re doing an impression of a historical figure how do you balance between parody and accuracy?
BC: You have to gauge the tone of the piece, if it’s Fargo and you’re playing Ronald Reagan, it’s a very serious approach. You don’t do the Saturday Night Live version of Ronald Reagan, you don’t treat it like a character. That’s a big challenge there. The trick is to make him a real person, so that’s it. So if Fargo had a different tone, then you’d do it broader. Every actor’s job is to find the tone of the material and match it. Don’t act in your own movie. I’ve seen a lot of movies where the two lead actors are in completely different movies. Watch the move The Beach with Leonardo DiCaprio — he’ll come sliding into the jungle like it’s the hardest trail ever. Then the French actress who stars in it with him, she comes in after him and she’s like walking in the park with her dog. And so, as a Director, I’d say “Leo, it’s not that hard, and for you ma’am it’s much harder,” that way we’re watching the same movie.

YS: We’re very excited to see season three of Ash Vs. Evil Dead too. What can we expect this season?
BC: Big stuff. Jaw dropper. It’s a jaw-dropper season. We’ve sort of cracked the mythology open. Ash is not just a doofus, he’s actually foretold in an ancient book, so why him, the average guy? Why has evil, if you will, risen again to test the mettle of the average man? Will he save humanity? It’s epic stuff. And episode 9 and 10 are my favorites we’ve ever done.

YS: Please tell me we get to see Ashy Slashy again?
BC: Well never say never, but he doesn’t have a big role this season, there were too many things to do. But the puppet is out. You can buy the puppet.