TAY ANDERSON IS MAKING HISTORY IN COLORADO BY BECOMING THE YOUNGEST CANDIDATE TO RUN FOR DENVER PUBLIC SCHOOLS BOARD OF EDUCATION. 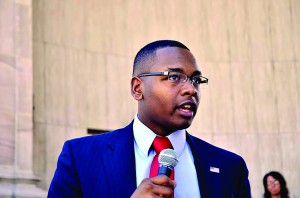 Tay Anderson is not your typical type of visionary. In only 18 years of life as an African American adolescent, Anderson has overcome the struggles of homelessness, discrimination and an unwavering high expectation to accomplish what hasn’t been achieved before. He stands amidst an ever changing public educational landscape routinely saturated with uncertainty and oftentimes injustice. He refuses to idly wait for constructive change to happen on it’s own. Last year Anderson had the idea of running for a seat on Denver’s Board of Education. He is now officially the youngest candidate to ever run for the position. Four seats are currently left for the taking on the board with final results to be determined on November 7th after the election. Yellow Scene sat down with Anderson in a coffee shop in the heart of Five Points to uncover what his plans as a candidate are and ask how it feels to be making history in his hometown.

Yellow Scene: You are now officially the youngest candidate to ever run for the position of a seat for The Denver Public School Board. How does this resonate for you?

Tay Anderson: It is a humbling experience to be able to represent young people from across our city and our state. To be able to be not only just an advocate but a champion because we have advocates and now we need champions that are on the board. We need champions in our local legislators as well. The board will be governing over 190 schools and impacting over 98,000 students and so the core mission and vision for Denver Public Schools is for the board of education to govern a school district and that is what i’m trying to do is make sure that there is a governance for young people because at the end of the day, young people are the movers and shakers of the Denver Public School Board of Education.

YS: You’ve mentioned one of your top priorities will be to create more opportunities for students of color. How did this become a major objective for you and how will you implement it?

TA: It was a major objective because I’m black and I’ve seen the discrimination as a student myself or people thinking that African American, latino students Asian students or students of color cannot succeed like their white counterpart. I really want to elevate the platform so that when we look at statistics, it’s not negative about our students of color, that when we look at African American males we’re not saying one and three black men go to jail, we’re saying three out of three black men go to college in their lifetime. I really want to change the statistics that are formed around young African Americans. Right now, it’s perpetuated into the prison pipeline because we’re suspending and expelling our kids at a high rate so we need to

come up with a solution and I’m drafting that currently right now.

YS: I know you’ve played a major role when it comes to social activism for Black Lives Matter, Muslim rights, women’s rights and many others. Is this still a platform for your voice to be heard?

TA: The future of being an elected official doesn’t change once I’m elected. I will continue to represent young people everywhere and really making sure they know that once i’m elected it doesn’t stop. That happens with a lot of our politicians that they show up when they need your vote but they don’t come back once they’re elected. I really want to change that narrative of an elected official to say ‘I stood with you before I was a candidate, while I was a candidate and now i’m an elected official and I stay with you.’ It doesn’t matter who or what it’s for. I’ll continue to stand up as long as the principals who have the democratic core values share the progressive values that I believe in my heart.

YS: On a national scale, I know that you have an aim to provide tuition free access for a college education for all communities in the country. What are your future plans for this?

TA: Once elected I would like to change the entire high school curriculum within Denver Public Schools. I will bring forth a resolution that will mandate that the four years will be like college. Your first two will be general studies and really learning about science, math and doing just two years of school curriculum based learning and the last two years I would like to see all students either enrolled in in school current enrollment classes or going to Community College of Denver to take those currently enrolled classes because I want to make sure that students have the accessible opportunities so that they can get their associates degree while they’re getting their high school diploma.“