IN 1921, A FLOODED LAFAYETTE STAYED CONNECTED THANKS TO AN ALL- FEMALE CREW OF PHONE OPERATORS. Coal Creek travels over 30 miles, from Coal Creek canyon in the Front Range, down into the Boulder Valley. The towns of the Northern Coalfield, Marshall, Superior, Louisville, Lafayette, follow the river’s course. Adolph Waneka, one of the first settlers in the Lafayette area, spent his first winter, in 1860, living in a cave along Coal Creek. 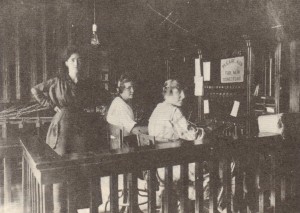 Denver lies at the confluence of the Cherry Creek and the South Platte River. The locations of stage stops, where covered wagon trains could rest and resupply, were dictated by rivers, providing water for horses to drink. On June 3rd, 1921, Coal Creek flooded. Three houses from Lafayette’s Standard Mine were washed away, while in Erie the raging waters carried away 30 more buildings. One grocery store was filled with six feet of water. Lafayette’s streets weren’t paved until 1960 which inevitably turned to mud during the rainfall. A severe flood turned the streets into rivers, and all of the roads out of town became impassable. The Jewel Theatre in Lafayette, where Odd 13 Brewing now stands, experienced a double-whammy of bad luck. A hailstorm the week before had destroyed the theatre’s roof, the torrential rain ruined everything else inside.

For reasons unknown, there were hundreds of motorists in Lafayette that afternoon, who became stranded in town. Lafayette was inundated with long-distance calls from people wishing to know if their friends and loved ones were okay. As the streets outside fl ooded with up to six feet of water, it was Lafayette’s small team of switchboard operators, all women, that kept the peace. Back then, phone calls were made by calling an operator in town, who physically connected an audio cable from one jack to another. A long-distance call required operators in two different towns to call each other. The operators in Lafayette spent hours routing calls into and out of Lafayette. It was not until late evening that they made their last calls. The Lafayette Telephone Exchange was eventually replaced by the Mountain Bell Telephone Company, which ran out of the old Union Hall in Old Town. It closed in 1974. Sources: Elizabeth Hutchison, Lafayette Leader

To learn more about this and other stories from local history, come visit the Miners Museum: 108 E. Simpson Street, Lafayette, CO Tuesdays 7-9 PM, Thursdays and Saturdays 2-4 PM. Open by Appointment (303) 665-7030.