With systematic oppression at the forefront of our social and political daily grind, I am sure to have lots of delicious food, libations, and plenty of difficult conversations this season. Let’s start with October’s second favorite federal holiday: Columbus Day.

“Tradition is to suffer…We have followed tradition in our mourning [Chief Sitting Bull] …not been happy, not enjoyed life’s beauty, have not danced or sung as a proud nation….blackness has been around us for a hundred years. During this time the heartbeat of our people has been weak, and our lifestyle has deteriorated to a devastating degree. Our people now suffer from the highest rates of unemployment, poverty, alcoholism, and suicide in the country.” — An Indigenous council project, Omniciye Woiyaksape: Sharing Wisdom

The October 2004 Columbus Day parade was my first experience with civil disobedience. In response to permits being pulled to celebrate a slave trader and tyrant, the Denver community organized a Four Directions march in protest. The idea was the local and Indigenous communities coalescing in the center of Denver as groups of people came from each direction: North, East, South, and West. It is a symbol to honor the four directions and the paths, struggles and journeys people have had to make since colonization in the 1500s.

Watching police clad in riot gear, with covered faces and threats of mace and tear gas, I realized how using their to batons to beat rhythmically, weapons used to instill fear, was just an extension of the brutality, just a form of institutional racism, that still plagues our society 500 years after Columbus landed.

“I fight against the cultural genocide of Euro-American’s institutions and values…. I ask mi abuela, grandmother, where do we get the strength, how we can survive? She whispers we survive….She survived, but the violence was passed on in our memory.” — Excerpted from Colonized Woman by Belinda Garcia 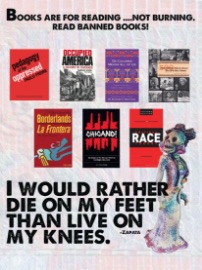 When I hear the words “Christopher Columbus” my mental and physical response is riddled with images of the brutality, dismemberment, and sexual violence that colonization enacted and capitalism perpetuates even today. Columbus’ own journal essentially stated, “They’re nice….lets enslave them**” (Forgive the paraphrasing, but I’m not wasting my 800 words), feel free to look it up.*

When something traumatic happens to you, you remember it. Epigenetic science is just now beginning to quantify the impacts of historical trauma, on physical and mental health. Historical Trauma is defined by Maria Yellow Horse Brave Heart, PhD, as “cumulative emotional and psychological wounding across generations, including the lifespan, which emanates from massive group trauma.” I see this setting up a pattern, because all matter in the universe resonates on a quantum level. Our internal selves are in constant resonance with our environment, thus affecting our health and wellbeing, both sub-atomically and generationally. It’s complicated and deep, I know.

This is why shifting from Columbus Day to celebrating Indigenous Peoples Day is a step towards consciously showing and celebrating the spirit of a people, who despite war, genocide, and intentional disregard, continue to create leaders and challenge systemic and capitalistic decisions affecting the basic necessities of life, such as water. #MniWiconi

We also must look forward and celebrate the resilience that keeps our Indigenous communities alive today.

We cannot continue to ignore facts of privilege over fear of white fragility or making people uncomfortable. Of course these conversations are uncomfortable; systematic annihilation of a people and genocide aren’t meant to be cozy topics, but keep in mind it’s also uncomfortable to experience it. We must remember that part of the seed of colonization is to purposefully isolate, conquer to divide, and to break down the spirit. Not only of those conquered, but to keep future generations in line with the status quo.

We can’t erase our history; it is inextricably intertwined with who we are, and has fundamentally changed us all at a genetic level. It is up to everyone to utilize their imagination and sense of compassion and humanity to create safe spaces, and to support (financially and physically) the people doing work on the front lines. We must continue to support the people who fight oppression, and refuse to accept the common refrain that, “it’s just the way things are.”

We must interact with our environments and communities, but we must keep in mind that all actions have reactions. I am inspired everyday when I see people coming out of the woodwork to help, people supporting each other; standing up, kneeling down, or just showing up to be of service to their communities. It is time we make some choices about how we show up everyday, for one another and for the generations ahead of us.

We are resilient, we will survive. Now pass the mashed potatoes.