Look for the Helpers

I’m at a loss. I honestly don’t know how we can get it wrong so often, when we know what it looks like to get it right. We’ve seen it played out in front of us for the cameras so many times. I’ve been watching it for weeks—as the country rallied around Houston and forgot about about Puerto Rico. As the mayor of San Juan waded through waist-deep water with a bull horn looking for citizens who needed help, while the President tweeted barbs at her from a golf course in New Jersey. 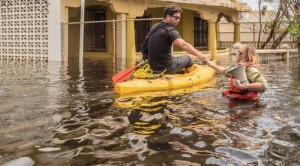 It’s hard not to get distracted by the detractors—especially when we have so many leaders so committed to finding ways to split us apart. But I’m trying to see the helpers. Like the clip from CNN reporter Ed Lavandera of the man towing a boat behind his truck, on his way to go “try and save some lives.”

It seems an almost apocryphal story, considering how often you see it circulate across social media, but it’s a real one, and it’s been verified—the one Mr. Fred Rogers shared about his own mother telling him to “look for the helpers” when a catastrophe unfolds. “You will always find people who are helping,” she said. We just have to remember to look for them.

Every once in awhile, I’ll see the picture of Keisha Thomas using her own body as a shield for Albert McKeel Jr.—a man sporting a confederate flag T-shirt and SS tattoos—from being attacked by anti-KKK protesters responding to a KKK event in Ann Arbor, MI in 1996.

I saw the helper.

I remember watching footage of the first responders in so many horrible moments over the last 20 years. Locally, at events like Columbine, and the Aurora Theater shootings. In New York and D.C. on 9/11. In Las Vegas on October 1. So many natural disasters, like the Tsunami in Japan in 2011, the earthquake in Haiti in 2010 or the one in Nepal in 2015.

I saw the helpers.

I was in Madrid last year a month before the election, as xenophobia was taking hold here in the U.S., helping pave the way for Trump’s win, and the plight of the refugees from Syria was at a fevered pitch. I remember the giant “REFUGEES WELCOME” banner I saw hanging from the Palacio de Cibeles.

I saw the helpers.

Mr. Rogers’ mother was right. There are helpers everywhere we look. Like Carmen Yulín Cruz Soto and her bullhorn, and the legions of first responders all over the map. Concertgoers at Mandalay Bay. We have their examples in front of us. We can see them, clear as day, doing heroes’ work.

I see the helpers.

All we have to do is follow. All we have to do is let them take the lead, and get in line. We can be better. We can let love of each other—regardless of country of origin, race, religion, gender assignment or sexual orientation, but as people who share this world—be the thing we aspire to represent more than anything. We can be our best selves when we shut out the voices that seek to divide us from within.

We just have to look to the helpers.