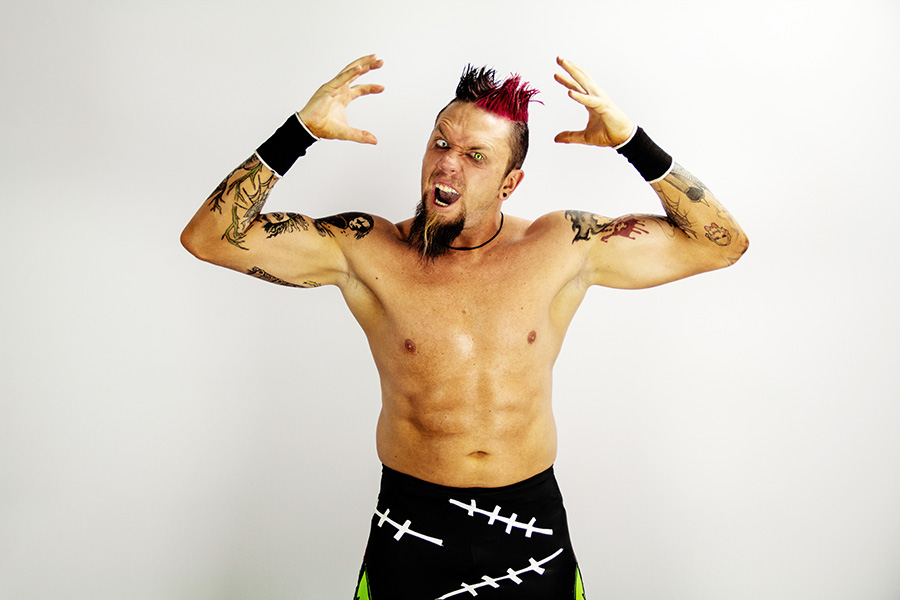 Rob Ryzin wasn’t born to work a “normal” job. Having primarily scraped by in odd jobs to make a living (he’s been a T-shirt printer, warehouse worker, forklift operator, performed as the Easter Bunny, was a recreation center fitness coach for kids, and more…), wrestling was the calling he was always headed towards. He’s wrestled anywhere and everywhere he could, all over Colorado, Texas, South Dakota, Kansas, Canada. This is his story.

We were wondering how a guy goes from dead end jobs to the heights of wrestling competing for spots in the World Wrestling Entertainment organization? So we talked to Ryzin about his life before wrestling. He has quite the story, it turns out, telling us his “parents were both very bad alcoholics; even saying it today is hard because I do love them both. His grandmother took custody of the kids (him, his brother, and his sister) when he was just 5. He says, “My grandma, still to this day, is the strongest women I ever knew. She instilled a lot of good values in me (no drinking, no smoking or drugs, ever! Plus ingrained kindness and to be tenacious in everything I do).” He continues, telling us that, “as her health slowly declined, I decided to move back in with my Dad, at age 13. Just two years later, as I was turning 16, my dad passed away from lung cancer and I lived alone ever since.

Yellow Scene: When did you get into wrestling? How did you know you’d found your passion?

Rob Ryzin: I have always been a fan of wrestling. I considered it my escape from reality growing up. I still have kindergarten documents that say when I grow up I want to be a WWE Wrestler. I never lost sight, no matter how dumb someone thought it was, how many kids heckled me, and even some teachers who told me it was “unrealistic”. I persevered. I started training at 14 years old and got smashed up by the older wrestlers to “toughen me up”. The company I started with folded after six months so I would practice what I learned and apply stuff from video games to hone my craft with a couple of high school buddies. One of them high school buddies and myself rejoined a wrestling school at 17 yrs old and I have been an active independent wrestler ever since… growing and developing over the years, ultimately evolving into the wrestler I am today.

YS: You were one of very few selected to go to WWE camp. How did that come about and can you tell us how it turned out for you?

RR: I had outgrown myself in wrestling in Colorado and surrounding areas. I was travelling internationally to Canada and I, along with the same buddy from high school, along with a couple others, were nearly killed in a semi truck accident driving back from a wrestling show. For me, that was a wake-up call to pursue this dream. I left Yellow Scene with my passion to be a WWE wrestler and headed for sunny Orlando, FL. Having successfully been in sales I was also able to land a good Sales Manager position in Florida (that’s how much sales growth I learned at YS) so I had a fall back plan and that’s all I needed to make the move.

Within a couple of months I was able to “sell myself” enough to appear on WWE NXT as an “extra talent/enhancement talent” and have been a part of multiple WWE NXT appearances as such. I asked questions, listened close, changed my squeaky clean persona for a darker more brooding character to stand out more (think my passion of horror movies meets a priest for the devil) and kept persistently asking them for more opportunities. I was and continue to be relentless in pursuit of my lifelong dream to be a WWE superstar. Finally, that big opportunity finally came. I did RAW in Miami, FL on New Year’s Day 2018, then drove back to WWE Smackdown in Orlando the day after. I had never felt more comfortable in the environment than I did those 2 days. It was one of those moments I realized I was at the exact place I needed and wanted to be. I had a good dark match (a match that takes place in front of agents before fans arrive), shook hands with everyone, continued to ask opinions, questions, advice, and on the drive home I was on a real high. As I was driving home my phone beeped. I had received an email saying I was selected of 1 of 37 athletes from around the world to take part in the WWE’s first official tryout camp.

YS: And what was the camp like? Did you do a lot of prep for it?

RR: I trained my ass off while working full time 40+ hrs a week to try and be in the best physical condition I could be…even being ill days before the tryout (but NO excuses). Honestly, the 3 days inside the WWE Performance Center were brutal. Think military bootcamp meets an NFL combine. Like everything else I do, I didnt let the fact that there were olympians, MMA fighters, and elite athletes stop me. I did all I could and left every ounce of myself in the ring. Every ounce. I was chosen amongst a select few others to do another match in front of everyone as a feather in the cap to top off the 3 days and it went very well. Then we all said our goodbyes. The experience was amazing, I love it there; love it so much that it was also extremely nerve wracking. I worked my whole life, selling myself, learning the craft, being a historian of the WWE and here I was putting all my cards on the table in front of every coach and agent they had. The 3 day camp ended on the eve of my 32nd birthday. I took solace in knowing I was a skinny little kid from Colorado who did everything I could to obtain this “impossible” goal. I now await the fate of the WWE as they have yet to send out the notices of how I did and where I go with the WWE from there.

YS: What’s the future for “Ryzin”?

RR: As I await the WWE’s response, I will continue to wrestle on the independent circuits, although I have become more selective about where I work. I have a lot to contribute but I also take my wrestling persona and the marketing I pour into it very seriously. This is “show business” or the “Wrestling business”, after all, and I think some talent and outside promoters forget the business part. I also have eyeballed a few other high level television produced promotions I can see myself in should the WWE feel that now is not my time to get signed to a deal. Only time will tell.

BUT in the meanwhile… RYZIN Fans Rejoice as I have been booked to appear at PRIMOS Pro Wrestling’s 4th annual Alpha 9 tournament back home in DENVER, CO Sunday May 6th at the Watering Bowl, 5411 Leetsdale Drive, in Denver. I fully intend to WIN IT ALL and make it a homecoming that NO ONE WILL EVER FORGET!

YS: Thanks for speaking to us, Rob. Good luck in your career. You make Colorado, and Yellow Scene, proud.

Check out this video of the WWE Performance Center training. It looks grueling.