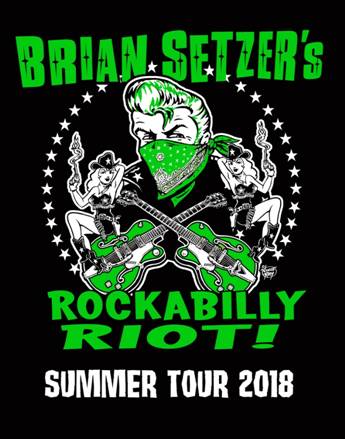 Sure, the album itself is three years old, but that just means that Setzer’s given everyone a chance to hear it before he struck out on the road, stopping in at Hudson Gardens in Littleton on June 10. We’re unapologetic Setzer fans, so we took the opportunity to have a quick chat with him about his Rockabilly Riot! (Victor Entertainment, 2014) tour and his reunion with the Stray Cats, among a few other things:

Yellow Scene: You recently reunited with the Stray Cats for time in a decade a couple of months ago. What was it like setting into that groove again after such a long hiatus?

Brian Setzer: I think it’s funny. It was just like getting back on a bicycle, really. I’ve known the boys so long. It wasn’t any sort of rehearsal even needed. We just stepped right back on it.

YS: I love that. Rockabilly Riot came out in 2014. Why now and what was the impetus for this tour?

BS: Well, I just really started to tour with the Rockabilly Riot. A lot of the shows like you have in Littleton have just become available now, and as far as the size and the accommodation across the country, we’re between small show and a big one, you know?

BS: They just seem to sit right, and I love taking the band out. Rockabilly Riot offered just a month’s run like this. I throw the dogs and the baseball gloves in the back of the bus.

YS: Go out and have a little fun.

YS: Well, we appreciate that. That’s some love for us. When you look at the ebb and flow of some of the Americana styles, Rockabilly always has a steady, strong undercurrent as opposed to, say, swing which had its resurge into sudden popularity in the ’90s. Why does Rockabilly hang around so successfully.

BS: First of all, it’s kind of the building blocks that it all started on and people can relate to it. Something about the magic of that sound has endured all these years. For me, it has the musical ingredients. When those guys started back in the day, those guys could play. All of them. Those guitar players, they could all play… Whenever it comes around, I’ve seen it a lot, everyone relates to it. (And) besides the music and the sound of it, it’s got the rebellious (side) that people can relate to with rock and roll. Also, it has that style now that’s become something that is just a lot of fun and it’s a classic style. That whole rockabilly look and restoring old cars and motorcycles and the clothing that goes with it. It’s very appealing.

YS: You’ve lived through most of the evolution of the music industry. Talk a little bit about where you started and how things have changed since things began for you as a recorded artist. What has improved and what has suffered?

BS: Some of the things that have come and gone is, of course, you don’t sell records or make money out of the record industry side anymore, so that’s a bummer because it’s just gone away. All right. So, that’s happened, so you’ve just had to find other ways to make a living. What’s come about now, and this happened to me, is being able to play live.

BS: Being that I could just all of a sudden take this rockabilly ride and not have to do anything. It used to be you’d have to go on a morning show and talk about it, and you’d have to do a video. You’d have to do the whole press/publicity side of it, but now where it’s come down is just go out and play now, and people come out to see it. In both those aspects, that’s how it’s changed. 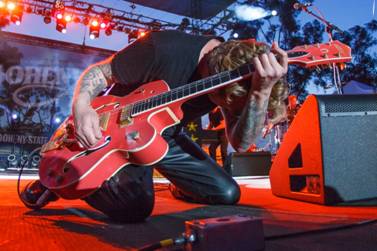 YS: I’ve had this conversation with other friends, too, and we all lament the death of the CD sales and the record sales. (Although) the records are coming back, which is pretty cool. Folks have said that the idea that artists now are surviving by touring means that only good artists are surviving because if you can’t perform a live show and hold that crowd no one is going to show up for your second show.

BS: That’s absolutely right. Exactly. That’s exactly what’s happened, so down the road it goes for better or worse. And it’s both. What you said makes a lot of sense. You’ve got to be able to cut it live. Absolutely… For me, it’s always been about live music anyway. It’s what’s always been.

YS: All right. Looking back over all this time, what do you know today that you wish you knew 30 years ago?

BS: I wish that … It’s easy to wish for things, right? A couple more hit songs would have been wonderful because that’s always tried and true, but you can’t make that happen. That’s magic. When a hit song happens, it happens. I suppose, through the whole process, if I could give my advice, is to take it easy. We used to get uptight and worried about things more than we needed to. That would be, actually, my advice to young musicians, is to just kind of do what you do and not worry about it so much. It’s so hard now, coming up, for young musicians because you’ve got a million critics all the time on the internet. We didn’t have that. We were a little sheltered about it, so having things bother you less would be a great way to just approach life in general.

YS: How do you keep it so fresh after so long in the genre, and what keeps you challenged?

BS: Nothing seems to get dull for me. I just wrote 14 songs and it’s been quite a while. I’ll be damned, it’s a gift, these songs. Somehow, the things I’m coming up with I didn’t write that yet. It just keeps coming.

YS: Real quick. Here’s one for my personal collection. You’re on a desert island and you only have three albums to listen to. What are they and why?

YS:Yeah, man. You have three albums. What are we playing and why did we pick them?

BS: All right. Well, that’s a tough one, isn’t it? I guess what lights me, I need the first Gene Vincent record because that had everything going for it. It had the rebellion. It had the style. And, it had that guitar playing that I go back to… One of those first two albums he did. Blue Jean Bop. I don’t even know if the second one had a title. That one comes back all the time, so I think that one just to remind me where it all started. What else would I need? I think I’d need a good jazz album, just to keep me humble. Maybe something by Joe Pass or Wes Montgomery, on of those classic records that they have done. Again, it doesn’t matter. Just to hear those guys play the guitar. It seems to come down to the guitar for me all the time, and I guess the third record of guitar-playing … What would that third record be? Oh! All of the Elvis Presley Sun sessions, to hear Scotty Moore. Those three records, they’re still in rotation.