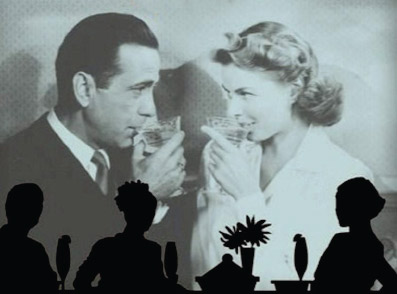 If you cried in your beer after “Infinity Wars”, craved a Peach Bellini during “Call Me by Your Name”, or still mix a White Russian everytime someone mentions The Dude, mixing up drinks with your movies this summer makes them more fun.

For the scoundrels, spies, and the good guys chasing them, grab a shot and some bacon at William Oliver’s in Lafayette. They carry over 40 Colorado whiskeys, along with dozens of bourbon, rye, and scotch from all over the world, something every jewel thief from Ocean’s Eight (out now and kicking ass at the box office) can appreciate. A Dirty Bird cocktail, made of moonshine, chocolate whiskey and irish cream goes well with those dirty rotten scoundrels in “The Hustle” (June 29).

Skip Jim Beam if you like Mila Kunis playing the scorned ex in “The Spy Who Dumped Me”, (August 3) and try a more local Peach Street Bourbon out of Palisade instead. For the getting a little long in tooth “Mission Impossible” (July 27) fan, a Smoked Old Fashioned made of aged whiskey will do. “The Happytime Murders” (August 17), featuring Melissa McCarthy and a cast of hard boiled muppets, needs something freaky like the Dirty Fairy, which mixes Absinthe and a Rocky Mountain Soda.

Local superheroes already know that Odd13 in Lafayette caters to their heroic needs all year round: just check out the artwork on their cans. Visiting superheros can go for a Codename Superfan IPA or their hoppy lager Superfly before catching “The Incredibles 2” (June 15).

Keep an eye out (probably your left one–what, too soon?), for Thor Strong Honey Wheat Ale at FATE Brewing in Boulder and Lafayette this summer. The Avengers swear by it. For “Ant-Man and the Wasp” (July 6) try an Avery’s Ginger Sour ale. It stings a little on the way down. Or mix up a quick Wasp Sting. That’s three parts Guinness to one part orange juice.

You’ll need something silly to drink after watching “Teen Titans GO! to the Movies” (July 27). Grossen Bart Brewery in Longmont, with their beard obsessions, are goofy enough to keep Beast Boy and Cyborg in stitches, even if they’re too young to drink them. The Frida SMaSH Belgian Ale or Chin Curtain IPA would keep them laughing.

You’ll crave only the darkest stout like Oscar Blues’ Ten Fidy Imperial Stout, or Great Divide’s Yeti after watching the superpowered teens attack all the grownups in “The Darkest Minds” (August 3).

Speaking of the darker side, Luke Skywalker-approved Left Hand (there’s no way it’s too soon for this one) Brewing carries some of the best stouts and porters in Colorado, which you can enjoy while watching recent summer hits outdoors. Their Milk Stout Nitro pours out thick and creamy from the can like a Guinness, but with a sweetened coffee kick. It’s a beautiful thing to behold, and available all over the state. “The Last Jedi” shows up twice this summer at local parks: in Erie (July14) and Westminster (August 24).

Maui, one of the original superheros, would  fit right in with Odd13’s Hawaiian Bartender, a sour ale made of mango and pineapple. It’s only available in August so you’ll have to grab a Liliko’i Kepolo stop by Avery’s Tap Room. This tangy passion fruit witbier also comes in kegs for your next luau. “Moana” plays Friday June 29th as part of Movies in the Park in Lafayette. Dwayne Johnson also stars in “Skyscraper”, July 13th, which sounds a lot like “Die Hard”.

There’s more to summer fun than just beer. “The First Purge” (July 4th) is sure to get bloody and so will “Sicaro 2” , so don’t settle for a boring DIY Bloody Mary bar; lay out Bloody Maria spread instead.

You will need the basics:

• Pickled veggies including olives, onions, beans – but add jalapenos and other peppers

• The usual horseradish, Worcestershire, Tabasco, and spice it up with Sriracha, Cholula, and other hot sauces. Jalapeno and habanero taste best with tequila.

• Fresh garnishes like celery, cilantro but use limes instead of lemons. For the meat eaters add shrimp and bacon on the side.

• Lay it all out on a big table and let your friends make their Maria’s as hot as they want, just be sure to keep the drinks ice cold.

• Don’t forget the biggest movie monsters of the summer in “Jurassic world: fallen Kingdom”, (June 22nd). You’ll want to mix up an oldie but a goodie with this very lovely twist on the Green Dinosaur.

• Mix equal parts vodka, gin, spiced rum, Blue Curacao (for our favorite velociraptor), triple sec, sweet and sour mix, Sprite, and a load of ice. Pour into a mason jar or a little fish bowl. Garnish with plastic dinosaurs and cocktail umbrella to complete the look.

View all posts by Betsy Abbott →