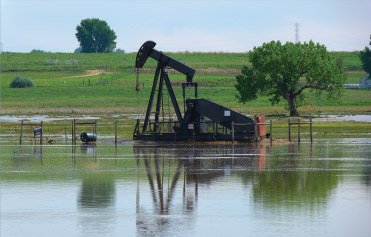 In 2009, Colorado Democratic Governor Bill Ritter spoke to a crowd of 2000 people at a three-day conference of the Colorado Oil and Gas Association. He was direct about the future of methane in the state: “Natural gas is a vital part of the New Energy Economy. It is a permanent part of the New Energy Economy. It’s not a bridge fuel, not a transition fuel, but a mission-critical fuel.”

The New Energy Economy exists today as Colorado’s fossil fuel era 2.0. It’s increasingly deadly to both people and planet and, because Boulder County is the latest offering to the executive class of the carbon age, requires a tremendous degree of political theater to advance. Important members of the Boulder County political class are rising to this task.

The City of Lafayette, for example, is led by six Democratic Party Councilors. They are currently placing the final touches on town drilling guidelines written by longtime Colorado attorney Jeff Robbins, of Goldman, Robbins, Nicholson, & Mack. Robbins, charging Lafayette taxpayers a modest $300/hour, boasts the qualification of having served on Governor Hickenlooper’s infamous 2014 “Oil and Gas Task Force”. Robbins completed identical regulations approved by the Boulder County Commissioners to facilitate large scale fossil fuel extraction [beginning] in 2017. These regulations are routinely represented by politicians as a method to protect public health and the local environment.

This claim is arguably the most misleading and irresponsible falsification by political leadership taking place in Colorado today. The regulations legalize the flaring of cancer causing volatile organic compounds and provide for, “Evacuation routes”, while anticipating, “…well integrity problems; explosions; fires; gas, oil or water pipeline leaks or ruptures; hydrogen sulfide or other toxic gas emissions; or hazardous material vehicle accidents or spills”. They make no consideration of climate change.

After questioning by Lafayette Councilor Merrily Mazza, Robbins revealed that the regulations were submitted to the oil and gas industry for review prior to Council vote. Lafayette Public Information Officer Debbie Wilmont later revealed that no one working in the medical or health care fields was consulted in their writing. This should give some illumination as to the real consideration behind the regulations. They are being moved forward now and will legalize industrial harm to the public, local ecology, and the global climate. Lafayette politicians are playing their loyal role to oil and gas profits.

Industry and government at the city and county are sharply aware of the universal rejection of drilling and have weakened all public attempts to gain control of the oil and gas threat. This has taken on multiple forms but is most easily observed in the Lafayette council’s established record of derailing any attempt to build rights-based legal defense to prohibiting drilling that is considered “extraneous” to the oil and gas industry. They accomplished this in 2014 through a legal maneuver with the Colorado Oil and Gas Association that eliminated public participation in the litigation against the democratically codified ban on fracking. After narrowing the legal battle to defend the local ban, the council guaranteed the measure’s loss. Like all members of the political class they now hide behind superficial legal defeats as a means of environmental crowd control.

Local and state politicians are betting heavily that the people will not notice, remain confused, or will be kept as spectators in this high-stakes game. With greater political sophistication and a widespread distrust of corporate-driven politics, history has regularly demonstrated otherwise. This is the conflict that will define Boulder County for generations to come. Don’t sit this one out.

View all posts by Cliff Willmeng →