DaniLeigh: On Origins, Prince, Politics and the Future

DaniLeigh (pronounced Dani-Lee), visited Denver’s gorgeous Westin Hotel on June 7, 2018 as part of a ten part BBVA Music Sessions. The second in the series, I sat down with DaniLeigh in her hotel room eleven stories above the pool deck she’d be performing on to find out about her music, her special connection to Prince, her obsession with the 90’s, and her politics.

At times shy, at times smiling her incredibly bright smile, and all the while conscious and deliberate with her words, DaniLeigh is the type of artist that is timely, both for the age that we’re living in and for the corresponding need to let loose and vibe on some good music. I was only a little nervous during our conversation after having checked her out in the lobby before realizing who she was. My bad. Shout out Justin at AXS for laughing at me for that.

But enough about me. Let’s talk to DaniLeigh.

Yellow Scene: So you go by DaniLeigh. Your real name is Daniel Curiel. Summer With Friends is your debut album. But you’ve been dancing since you were a kid, including with Nelly Furtado, who I love. You’re from South Florida, so I’m sorry.

YS: Yeah, you saw it. And… you have Dominican roots. But apart from a google search, who are you?

DL: Hmm. Yeah.. Me, I’m a chill person. I hate negativity. I hate drama, so I try to to stay away from it. I’m a little sarcastic. I can be a little asshole sometimes. I’m pretty funny. And then, I love being with my friends. I love being with my family; I’m a big family girl. I’m very ambitious. I love winning. I love seeing results. Yeah, I’m just a chill little, little girl.

YS: I dig it. Summer With Friends. Talk to me about the theme, the inspiration, the mood. For the record, I thought that using the Aretha Franklin to lead off was sexy AF. It hasn’t been used that well since Yasiin Bey did it, right?

DL: Miss Fat Booty. Yeah. The inspiration behind that, you know, that’s when I just got signed to Def Jam and I was pretty much just steady working, just being in the studio and just creating a whole new sound. I was really with my friends and it was the Summer and I was like, ‘yo, it’s just the vibe.’ This project was just so much fun and how it came out togther and, yeah, that’s why I named it Summer With Friends.

YS: What was the first single off of SWF?

DL: All In Know

YS: I’m really digging that All Day, though. I think it’s gonna be my Summer anthem.

DL: Really? A lot of people love that record. It’s so fun. It feels good, it’s just the vibe.

YS: But also what you’re saying, like “no one’s gonna stop me…”

YS: Quick story: I was in Amsterdam for two years, bumming around, parting, having fun. And then Prince died. And Prince used to go to Amsterdam a lot to chill and destress and play at this music spot called the Melkweg. Melkweg means Milky Way. And so, he would always have like 2 am, 3 am shows there. So in honor of Prince they had a 2 am show. So me and my buddy Danny were in the Bijlmer, which is the POC area of Amsterdam, and we jumped on the train, went up to the Melkweg, got compeltely f***** up, cried in the stands. You know what I’m saying, cause it’s Prince, right?

YS: And so you have a powerful connection with Prince. Lots of folks ask the question, but I’m wondering about a different level of it. ‘Cause I think in one inteview I read, you said something like, “yeah, he emailed me and so I went and did this work.” But there’s a million people, right, doing music, dancing, doing stuff. What was it about that moment, about you, that you were putting out there? What put you on Prince’s radar?

DL: You know it’s crazy because, he never told me what he saw.

YS: You never asked him?

DL: I did ask him and he’s like, “I’m not gonna tell you.” But I was heavily working in the dance industry, you know what I mean? I was dancing with Pharrell, I had a differnt couple music videos I was in. I had just did the BET awards with Beanie Man and Elephant man and Missiy Elliot and Pharrell. I think that was around the time that he hit me up, so maybe that’s what it was. Like, “how did he find me?”

YS: It had to be something. It’s huge to be 18 and have Prince call you up like, come through. Ok, but let me see. I found this picture of Prince. Tell me if this looks familiar to you. 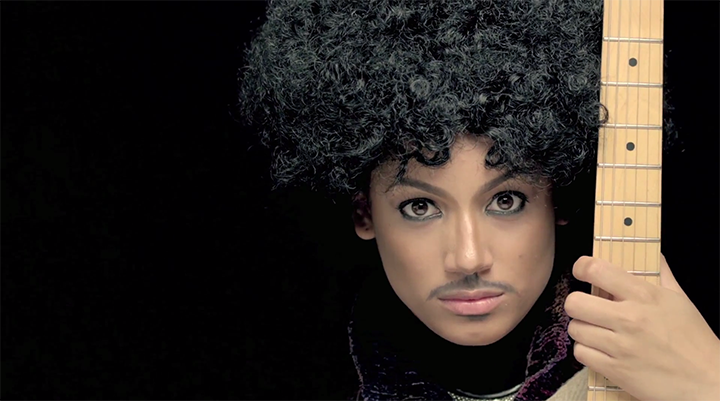 DL: I literally just posted this today on my instagram [Prince – Breakfast can wait].

YS: Cause it’s his [anniversary of his birthday]? How do you feel about that?

DL: Yeah. It’s crazy. I didn’t even like, realize… you know. He’s still with us. He didn’t go anywhere.

YS: Cool, so, AXS, BBVA, they’re doing these music sessions. There’s 10 of them. Apparently you’re the second. How did you get involved?

DL: They reached out to my agency, UTA, and booked me through there. It’s dope because it’s a really cool platform. I’ve never been to Colorado. It’s warm. And it’s super intimate. I’m excited to see.

YS: Colorado is a bit country but there’s lots of love. So, to switch gears. The world is crazy right now. I wish we were at a place where we could have a conversation with somebody just as an artist, right? But in the era that we’re in, identities matter. Like, who we are.

YS: So I wanted to know what type of politics influence you, or are embedded in your music? How do you speak to the moment that we’re in?

DL: I kinda just…I think my message is super relatable, on what I speak about, pretty much what I go through. And it’s the economy, money, living life, going through it as a 23 year girl, you know.

YS: I mean in an era where we have #MeToo, #BlackLivesMatter, and Standing Rock. In an era where, you’re of Latin descent, and knowing that they’re trying to build walls and Puerto Rico was destroyed…

DL: It’s crazy. Even the whole deportation thing. My next project, I’m gonna be giving all the funds that I make to a family.

It’s crazy. Even the whole deportation thing. My next project, I’m gonna be giving all the funds that I make to a family.

YS: Do you know which family?

DL: Yeah, I have all the info [this will be updated with that info when it becomes available.]

YS: Sure…helping out immigrants. I feel like it’s important. A lot of artists just want to be artists. And I feel like, and it sucks that the responsbility falls to People of Color, to marginal groups, to women, right, the LGBT community, to fight for a world that we deserve. How should artists be using their voice, their platforms?

DL: I think as artists we have the biggest responsibilty to like, just being able to go that route and fight for something. We have the platform for everyone to look at us and listen to us, so it’s very important, I think, to give back. It’s like, what are you doing it for if you don’t have a purpose, if you’re not helping.

YS: Word. Definitely. So, you said in an interview with High Snobiety that the Prince video was the peak of your career. It doesn’t seem like that’s the peak. Maybe a highlight, but you’re still on the way up?

YS: What music were you making back then, compared to now?

DL: Man. I was actually in a group. It was a duo group. And it was a 90’s hip hop influenced type old school. It was kinda like a TLC.

YS: Where can I find it? Can I cop it in a record shop?

DL: Yeah, you can. The name – we were like TLC for real – the name was Curly Fries. It was fun. We were both super young and colorful. We both danced. And it was cute.

YS: I’m getting visions in my head like In Living Color in my head. Like when Bruno Mars did that throw back with Cardi B on some Fresh Prince meets Fly Girls.

YS: They label you an emerging Latin R&B artist. But what artists outside of your genre influence you?

DL: Outside of my genre? Hmm. My influences in music are really, I’m really inpired by Rihanna, I really love her. She’s just a superstar. Aaliyah is another one. She was my love. Drake; I love Drake.

DL: Right now I’m just working on getting my project together. Gonna drop more music soon, something like six songs. So I’m very excited for that. In August I’m kicking off a tour with Jeremih and Teyana Taylor. So that’s in August so my project will be out before that. And then just go crazy. Just continue. Then album at the top of January.

YS: What other artists do you wanna work with looking to the future?

DL: Yeah, other artists I wanna work with. Man, I really want a song with J. Cole. That would be dope. I love Black. Drake, of course. *laughs* And just, even like new artists. I would love to collab with newer artists like dope, like I think Lil Baby’s dope. *laughs* Lil Baby’s fire, if I got a verse from him..

YS: Yeah? We’ll put in a word. Ok, last question. You said somethng about being stuck in the 90’s. Talk to me about yours style, your favorite 90’s pieces, you go thrifting all the time…

DL: Yeah, i’s so crazy, they were bringing back In Living Color. And I was gonna be a fly girl but they didn’t pick up the show.

YS: And that’s it. Thanks for taking time and letting us into your space. Good luck with everything. 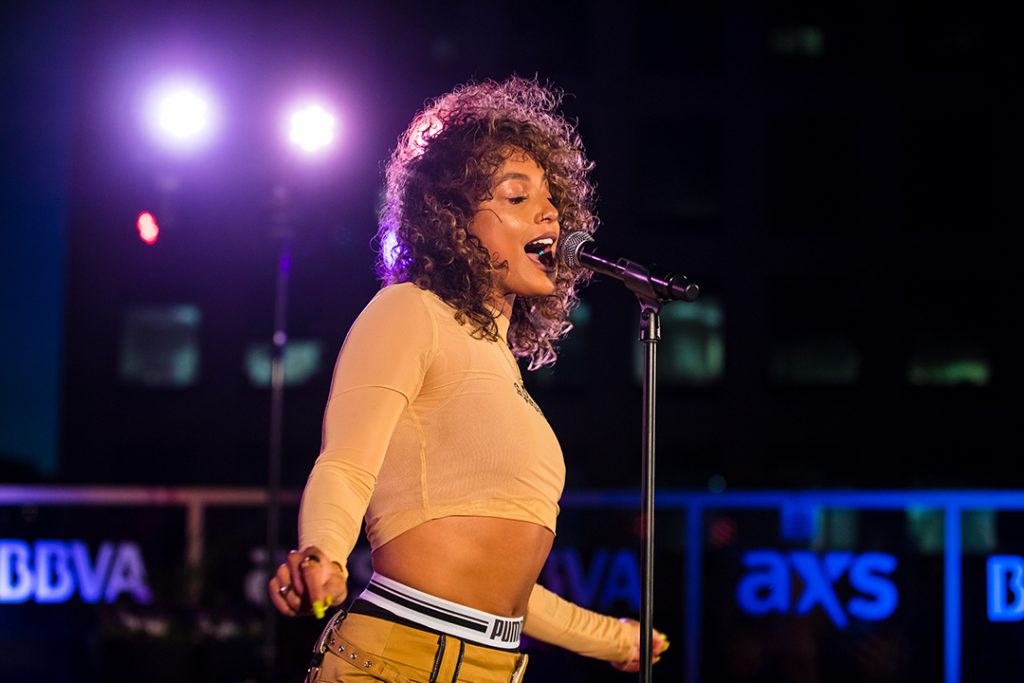 Check out the DaniLeigh sizzle reel in all her glory: