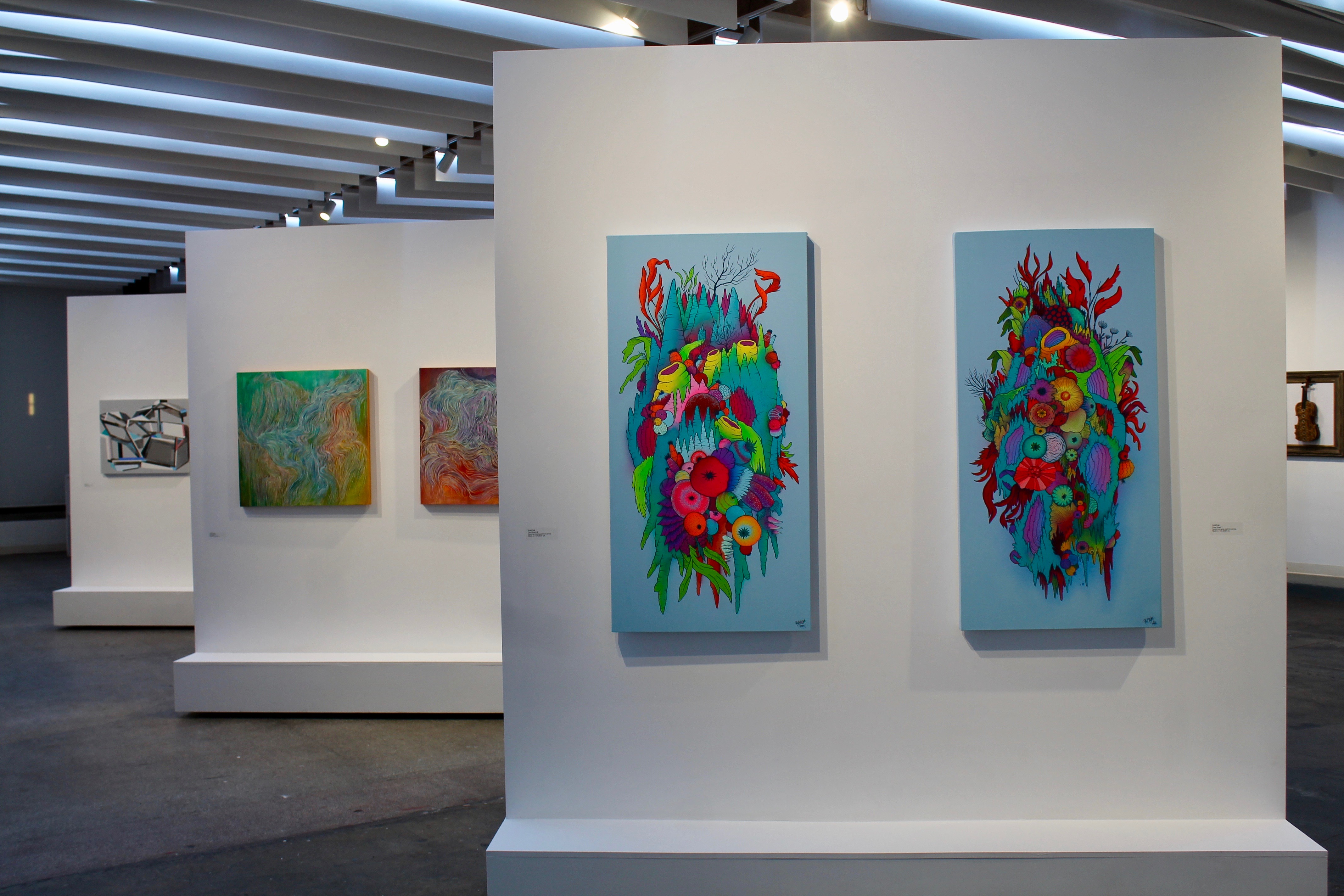 The Mirus Gallery’s latest exhibit (Jan. 11 to Feb. 9) celebrates ‘locals only,’ a concept I find wholly fascinating given Denver’s changing demographics and continual influx of newcomers. Denver art seems to be a continually fluctuating concept, evolving as the city does. Many of the 25 featured artists seemed new to the Denver art scene, as well as those with more longevity in the city including CT Nelson, whose surrealist painting was the first thing I saw walking in the door. And I couldn’t help but get one last look before I left. 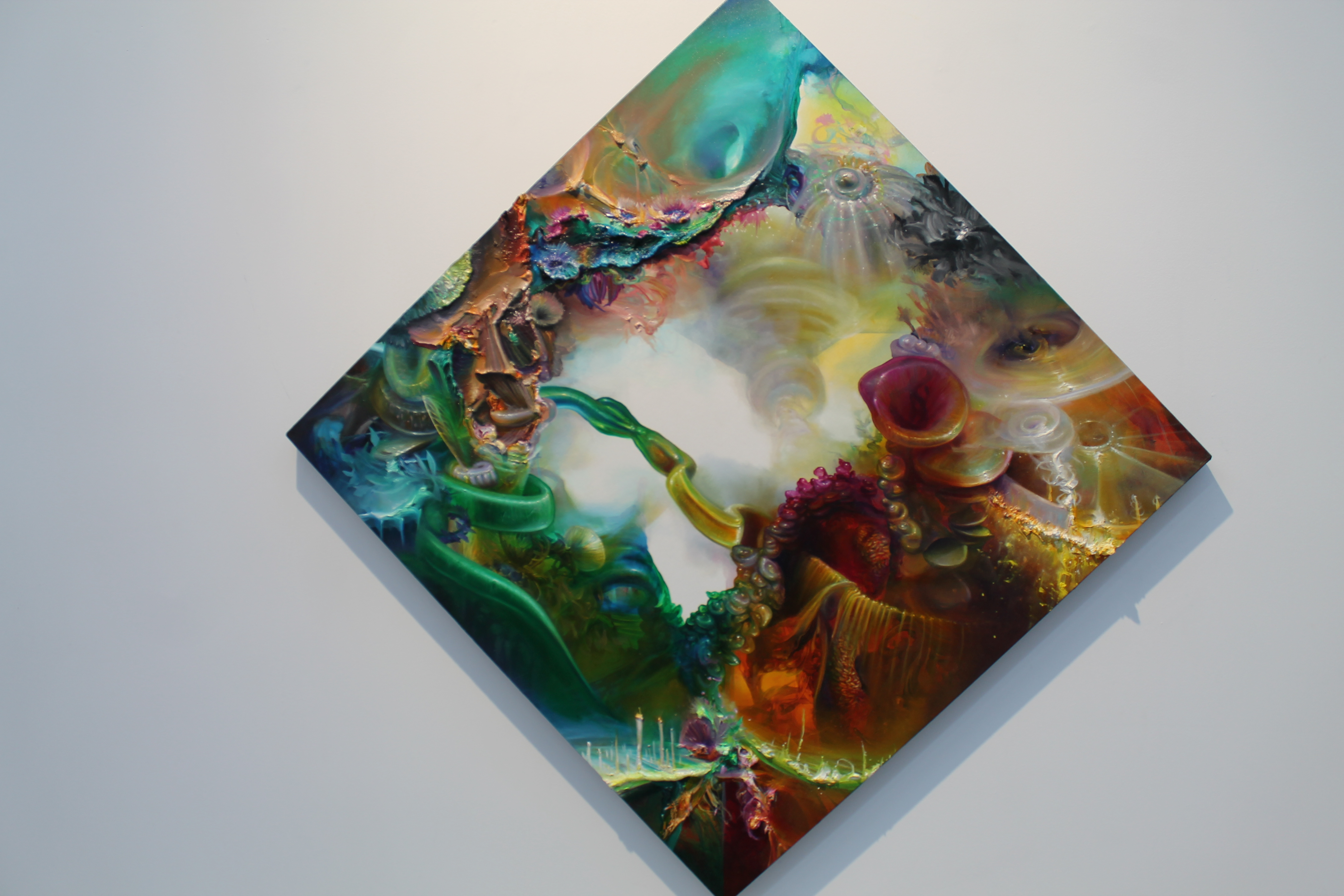 Justin Eastman first got his start doing large installations at Burning Man and all across the country. For the Mirus, however, he scaled down. His focus now on more accessible, saleable works that incorporate his complex system of LED lights and elegant, sleek design. Scaling his works down, the New Jersey born and bred artist has found a different market for them.

“It’s an uphill battle promoting your art. A three miles uphill both ways kind of thing,” he says.

Denver has grappled with the meaning of more people coming into the area, the idea that artists are incidentally gentrifying the city, are pushing out longtime locals or are being pushed out themselves as rents soar and the city starts to feel more like any large city – a homogenous, yet eclectic mix of cultures, people and influences. But it hasn’t come without a cost, mainly the rising cost of rent – pricing out galleries in the Navajo Street and Santa Fe Art Districts, which has artists relocating.

“There obviously are growing pains and the influx has definitely caught the city government flat-footed in terms of rent-control and enhanced infrastructure, but growth is inevitable and I enjoy seeing the changes and welcome newcomers. That sentiment really sells the people who’ve been here a long time short though — as if this place had nothing going for it until a bunch of Brooklynites colonized LoHi — which is a bullshit idea,” says Peter Miles Bergman, a professor of design at Metro State University.

Mirus too is an import, an extension of the Mirus Gallery, bar, coworking space created by curator and art dealer Paul Hemming in San Francisco. And what the Mirus was really looking to celebrate was those artists who are creating change and explore the growing and expansive creative culture in Denver.

“As Denver continues to expand and flourish the creative culture in the city has found limitless nourishment and cultivation. The supportive attitude towards the art has led to an influx of people, monetary investments in creative projects and a colorfying of walls and streets. It’s an amazing time to be in Denver,” Mirus representatives say in a press release.

Creatives like Rosston Meyer of Poposition Press who creates stand alone pop-out pieces and pop-up books with other artists like Julie Chen.

“I’ve been lucky I’ve been able to work with some of my favorite people,” he says. 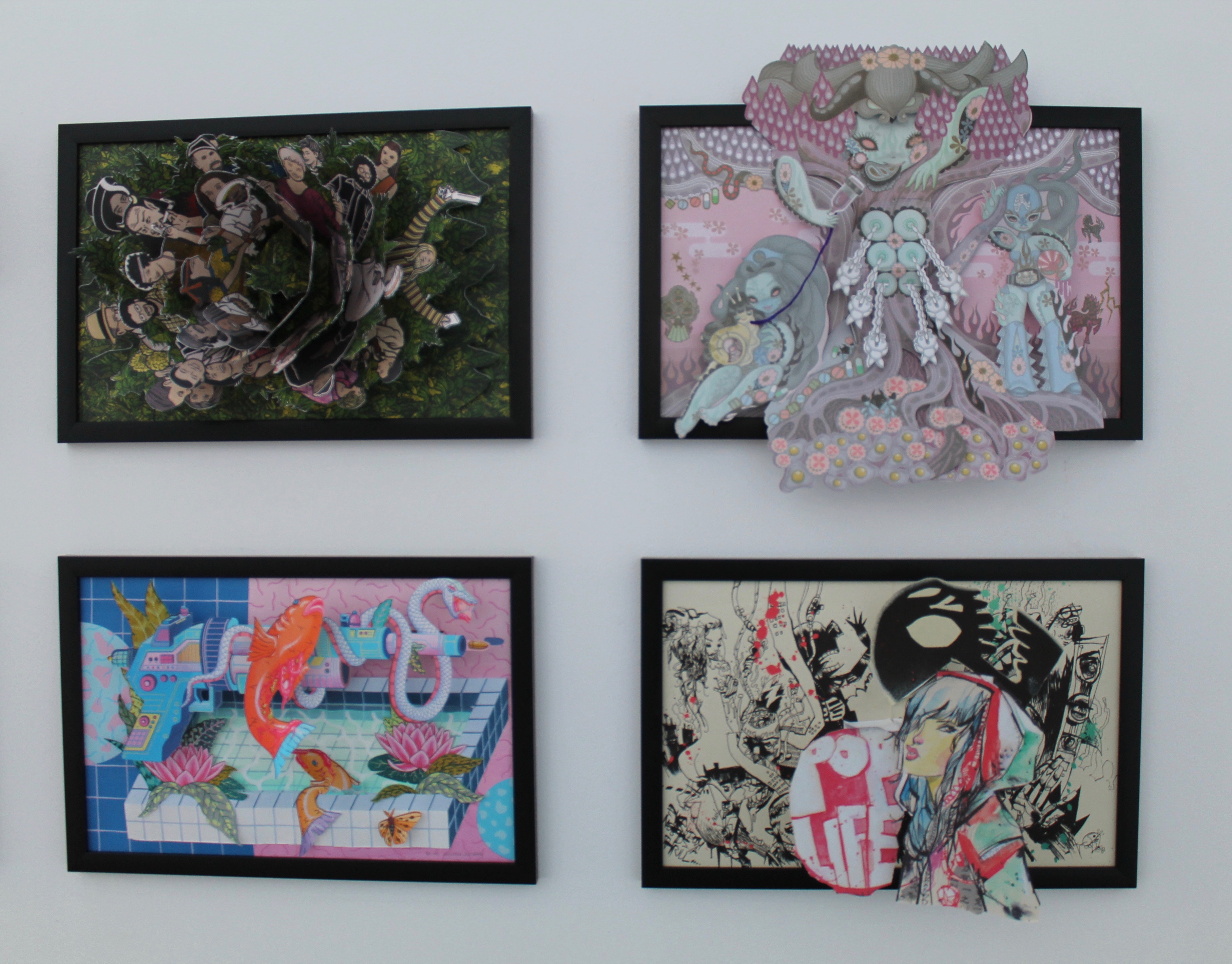 Meyer is essentially a publisher, merging his ideas with an artists’ original work, involving a paper engineer to bring the ideas to life through standalone designs and those that are collective works between engineer and artist. His pop-up books are relatively accessible at the price of $50, which more of less is the cost of any ‘art’ book, and I have to say, his take on the HP Lovecraft Necronomicon had me, both a book lover and an art lover, tempted to take out my wallet. He’s currently working on a book about marijuana, which will likely have quite a market in Denver. He was showcasing one of the works from that book during the gallery opening.

I appreciate a gallery opening that makes me question, not only the role of artists as producers, publishers, salespeople, and collaborators but also what makes someone a local? The minute you change your residency are you allowed to call yourself local? Is it a level of involvement, of knowledge, of appreciation of the past and present culture you are a part of? Is it having lived somewhere for 20 years, 10, 5? Where is that distinction made, and how do we as a city grapple with our own sense of place. Local artists have felt the changes and the impacts on the city, but many are open and accepting of the new imports of art. And while artists are critical to a city’s culture, let’s not leave behind the ones that helped shaped the city as well as those who continue to propel it forward.