Dead and CO at Folsom Field: A First Person Experience 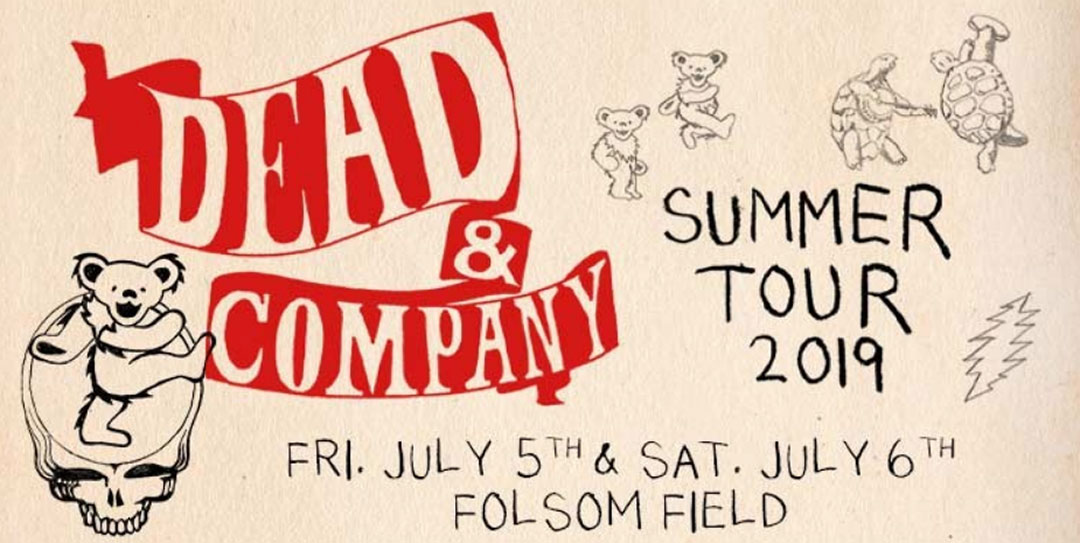 On July 5th and 6th, Dead and Company came through CU Boulder’s Folsom Field. This is important. According to the Grateful Web, “For decades, the venue has been a legendary haven for Deadheads dating back to the early 1970’s. While the Dead had played numerous shows in the Colorado area before, including the Miller Ballroom at CU in ’69, and two acoustic shows in ’70 at the Mammoth Garden (now the Fillmore), nothing quite sparked the interest of the Grateful Dead in the Centennial State quite like the legendary 1972 performance at Folsom Field in Boulder. Conditions were soggy, and the rain was relentless, but the music never stopped, and Colorado would grow to become one of the band’s most faithful markets, returning 41 more times to play shows in Telluride, Mile High Stadium, CU Events Center, McNichols Arena, and the legendary Red Rocks Amphitheatre.”

In honor of that, we sent one gonzo reporter to get lost in the crowd, drink some beer, and listen to some music. This is his report:

I drove to the stadium with my friend Penny, who sells flower headbands called Halo’s. She’s been selling these headbands for years and following the festival and jam band scene, which includes Dead and Company. How peculiar to be writing an article for a show and going with someone Penny Lane. If you have ever seen the movie Almost Famous, there is a writer named William who writes about Rock and Roll and spends his time with Penny Lane, who is a groupie who follows the music. This is my favorite movie and now I feel like I am living out the story.

I pulled into the stadium parking lot and could feel the fever in the air as if a carnival was in town. People were pulling up in cars, camper vans, RVs, Sprinter vans, and buses. The first thing you notice is everyone’s happiness. The smiles on everyone’s faces light up your own being. The people are much more friendly than in the “real world” and would help you with anything you needed, which includes free food, lodging, or any substances you desired. The Grateful Dead have always preached kindness and compassion and you can feel it radiating from their fan base.

We walked straight to Shakedown Street so that Penny could sell her merchandise. I wandered around, interacting with the fans as much as possible. Everyone always greeted me with a smile, a story, and a “where are you from?” The amazing thing about these shows is that people who sell merchandise, food, and art travel with Dead and Company. There were hundreds of vendors all across the lots selling t-shirts, posters, food, art, and so much more. You could come here just to go shopping and not even go into the show. There is a whole economy and road show that travels with the band. People make their living off of these shows and you can see all the hard work and dedication that goes into the whole weekend.

I did not have a ticket for the show, but went anyway, hoping to find another way into the show. I enjoy the adventure and thrill of not knowing what’s going to happen. I thought I might as well risk it and see if I can find another way in. I walked around looking for a ticket and interacting with folks. Hearing people’s stories and where they had come from was a lot of fun. I mostly enjoyed playing with people. I juggled and ran around like a clown, which makes people want to interact and play with you, so I was able to have fun with a lot of people.

People are also very accepting at these events, which helps you to become and share your full self. I’ve heard stories of people becoming inspired to change their lives due to the experience of a Dead and Company show, based on the pure amount of love and acceptance that they find here. When the show was about to start, I still did not have a ticket. I had accepted that I may not get in the show and was okay with that. I knew there would be people outside of the show hanging out and listening.

Then the hail started. There was so much hail, thunder, and rain that the security decided to take cover. I was walking by the gates and noticed that no one was working. I walked up to the gate and walked into the show. There was no security. So weird. Other folks with tickets were doing the same. Random gift of entry.

I met up with my friend Penny, who got a free ticket into the show from someone who appreciated her singing, which is called a miracle in festival and grateful dead culture. What she would do is stand outside the show and sing with her finger up and someone with an extra ticket and gets her into the show.

I felt so much appreciation and excitement to be in the show; Dead and Company did not disappoint. I was up in the stands and took in the night’s song, which included “Box of Rain.” I love this song and with the hail and thunder it fit perfectly into the night. The set was delayed, due to a hail storm, so they played one long set. I felt like this helped them get their groove and flow, which is needed for a jam band. The weather cleared up and I was in love with the crowd, music, and atmosphere. I was previously unsure if I was going to night two, but now I felt like I had no choice.

Saturday night had a different feel than Friday. There were a lot more people at the show Saturday and some were tired and worn out from the night before. You could feel a slowness in the people there, resting under the trees on the CU campus, reserving their energy for the show to come.

While walking around the campus I noticed the underbelly of the Grateful Dead scene is homelessness and addiction. I began to think maybe this is the best place for someone with an addiction problem. They would receive love and compassion instead of judgment. This would help them feel at peace with themselves, which would heal their addiction problem over time. We can have a longer talk about the failures of the broader US criminal justice and healthcare systems, and drug acceptance in general, but for now, these people were safe, were loved, and were living beautifully.

The day saw no rain, which was a nice change from the previous evening.I, still needed to find a ticket, though. Again, I hung out with the crowd, clowning around, accepting that I might not get into the show. The key to getting a free ticket to a show is waiting until the last minute and not caring too much if you do not get in.

I sat down with a group of people in the grass and we began to talk. I really enjoyed their company so I sat with them for a long time. We talked about our lives, our dreams, and how I was going to write this article. They asked if this was my first Dead and Company weekend and I said yes. Then my luck turned around. The man who sat next to me – Barry – grabbed his wallet and pulled out a ticket. He said, “Have a good time, you cannot miss your first Dead Saturday show.” I was speechless. I could not believe this happened to me. I held the ticket to my heart and said, “Thank you” over and over again. I could not believe how compassionate, loving, and supportive the Grateful Dead fan base could be.

I met a man on my way into the show who walked with a cane. We decided to share a beer as we talked. I was missing part of the show, but felt like I needed to walk with this man. He shared how his friend had commited suicide two years ago on this day. He expressed how he missed her and felt some guilt about her death. I have a Master’s Degree in therapy, so I did my best to be there for this man and give him some comfort. He seemed like a caring, compassionate man who just needed someone to listen to him. I knew I was there for a reason and he was there to teach me a little about the important things in life. It is amazing how when we slow down and listen to others we can learn about ourselves and the world.

The Saturday show was sold out and you could tell by the size of the crowd. I walked in by myself, which made things much easier. However, I got there late, so I decided to find an empty area I could dance and juggle in. During the set break, in the area I was in, the best hacky sack game of all time ensued. There were professional players running the circle, which made it so much fun. This is what you find at Dead and Company shows –  not just the band playing, but other talent and performers all over the place.

When the second set started, I found Penny and we decided we wanted to go on the floor. I met the security guard who lets people on the field, which is the less crowded area on the football field.. I asked if we could go down for the last couple of songs. He said he would need twenty bucks to let me down. That seemed fair and I paid the man and we got to go down on the field. I felt like each moment was more magical than the next. The songs and the flow were amazing. The highlight of my night was when they played “Eyes of the World,” which is my favorite Dead song.

When we left the show Saturday night and we were hanging out, the police came on horses to kick all of the people out. There was a New Orleans band playing for the fans still walking around. The police were slowly kicking people out, but it was the band that really led the people away.  That was the end of my Dead and Company adventure. I am so glad I decided to ride the ride. Make sure to follow Dead and CO at https://deadandcompany.com/ to catch their next show. Thankfully, they come to Colorado quite a bit. Until next time.

View all posts by Daniel McNicholas →