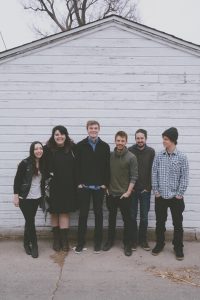 Processed with VSCO with av8 preset

Colorado’s grass-and-strings sound is well documented over the last several years, thanks to bands like The Lumineers and Paper Bird making their way into mainstream consciousness — along with the perennial success of the internationally renowned Telluride Bluegrass Festival. There’s a new-ish group on the scene worth of your attention and support. Avenhart, fronted by the indelible vocals of Andrea Peres and violinist and vocalist Olivia Shaw, brings something a little different to the party, with female-charged energy, tight harmonies and riveting stage presence. Here, the duo talks about how they met, their creative process and what it’s like operating in such a male-driven genre.

French Davis: Give me the story about how you all came together and decided to build this thing.

Olivia Shaw: We all met at CU Denver in Greg Garrison’s Bluegrass Ensemble in the spring of 2014. Playing together was super fun and we had a great vibe, so Andrea suggested we start a band at the end of the year. By 2015, we were working up songs and exploring what kind of sounds we could create.

Andrea Pares: …One day I brought an original song to them and asked if we could all play it, just for kicks. They agreed and it was amazing! We decided to keep going and I brought in more and more songs. Since then we’ve had some changes, some people have left, we’ve gained other members, etc. But we are still going!

FD: Talk about the songwriting process. How does that work?

AP: Someone will bring in a song—maybe it’s completely finished—and we arrange it together as a team. Other times, someone will bring in a chorus or a verse or maybe just a page full of words and a small instrumental idea. The group takes it and smooshes it around until it’s complete. I personally thrive with a co-writing situation and I love having the back up of five other people I trust to help me finish a song!

OS: It’s so fun to explore how our diverse musical influences, life perspectives, and creative processes translate to our songs. Payden (Widner, guitar) brought in a beautiful poem recently that we set to music. Clint (Koury, mandolin, vocals) wrote the music and lyrics for our new single, “One Last Look”, which was released on Saturday, September 14 at Swallow Hill. I bring in a lot of fully formed songs, but also love doing co-writes with the band.

FD: What’s your take on the music scene in Colorado? What do you like about it?

OS: I adore how music lovers from different “scenes” often hang out together, support each other at shows, and even collaborate on a regular basis. There’s a freedom and light-heartedness about our music scene that I really cherish. It’s also fun to see things evolve over the years, whether through the jams and open mics that happen every night of the week or the new venues that are being opened.

AP: The music scene here is incredibly supportive and inclusive. Everyone is really rooting for everyone else. It’s quite beautiful.

FD: What do you dislike about it?

AP: There are a lot of folk bands out here in Colorado! Which is amazing because we have such a reverence for the genre but it definitely makes standing out hard!

OS: I have no real complaints, but similar to the music industry at large, I’d always like to see more representation for marginalized groups, both on the performing and the business side of things. I’m optimistic that with clear intentions and the action steps to back it, we can change the future of the scene into one that’s inclusive and diverse.

FD: How has being a female-fronted band helped and/or hindered you asking the way so far?

AP: It’s pretty great being a female-fronted band in Denver, the community of other women fronting their own bands is amazing. Everyone is so supportive. If we lift each other, we are all lifted up. We have experienced some weird moments when we get pigeonholed into “female-fronted band stages” at festivals and we are always kind of in a weird side stage away from the main action and there’s no theme between the bands beside a female in each band. That’s just lazy in my opinion and it diminishes the hard work each band has done in their own genre. We are not great because we are female fronted, we are a great band THAT IS ALSO female fronted. That’s always frustrating.

FD: What do hope people reading this take away from your next live show?

OS: Fun! And maybe some cathartic tears to get the demons out. We write happy things and a lot of sad things, but my hope is that our songs are a container in which people can dive into their hearts and reflect on this strange and beautiful thing called life.

The question hung in the air like a balloon filled with wet cement. I wanted to answer, but realized my feelings on the matter were so conflicted that I didn’t even know where to start. The person posing it was one of my closest friends going back to when we were in high school together and she was the world’s worst chem lab partner, who never showed up for a lab. Since then, we’ve seen each other through multiple relationships, two weddings, one divorce, the loss of my father and countless other holidays on her trips back here from her home in Manhattan.

I’ve lived in Colorado since my Pop moved here for a job with Martin Marietta back during the Carter administration. I was a young child. My sister was born here shortly thereafter at Rose. We grew up here. I vividly recall jumping into snow drifts over my head in the blizzard of ‘82. Playing video games at Celebrity Sports Center. Shopping at Zeezo’s in Cinderella City. Buying comics at Buckingham Mall. Standing in line for Rich Karlis and Gary Kubiak’s autograph at North Valley Mall on New Year’s Day in 1987.

All that’s to say, I’ve seen the changes. I remember when they tore down Rainbow Music Hall. I remember the Caribou Ranch Fire. I remember when the Fillmore Auditorium was still called the “Mammoth Events Center.” I covered the re-opening of the renovated Gothic Theater. And now I see a state I barely recognize in so many ways. And to be honest, not all of them are bad.

I had the pleasure of playing horn with Head For The Hills on a couple show this summer — one of which was opening for the California Honeydrops at Chautauqua Auditorium. Got to chatting in the green room with the guys from the Honeydrops and it was their opinion that Colorado’s music scene was the best in the nation right now — bar none. That claim might be a touch hyperbolic, and it would certainly seem so to long-time residents trying to make a living as a musician, but I’m inclined to agree. It IS pretty amazing. And another example of that came to life this summer in the shape of the stunning new venue in RiNo, the Mission Ballroom.

I decided to make my inaugural trip to Mission for a show I marked on my calendar several months earlier — the Herbie Hancock/Kamasi Washington tour. I wanted to give the venue a chance to put its best foot forward with a show I couldn’t wait to see. And as live shows go, it was pretty close to a perfect night. From Washington’s eager, youthful, hip-hop-flavoring-sprinkled-on-top-of-acid-tinged, straight-ahead jazz, featuring — two full kits on stage with drummers who never got in each other’s way — to the living legend-slash-icon-slash-jazz-giant Herbie Hancock’s unmitigated perfection, the show was indelible.

And a big piece of that is thanks to this venue. It’s scalable from 2,200 to almost 4,000 seats, depending on the room the act wants to reserve for seating or a dance floor. The enormous, lighted-from-within mirrored ball is magnificent. The sound was perfect. Truly.  There were enough bar points that I never had to wait for a drink. There’s next to no parking, but they have ride-share traffic management down to an art form now. There’s a pre-gaming outdoor patio designed for socializing and meeting friends. It’s a slam-dunk venue.

Sure, there are plenty of things that aggravate me about all the changes in Colorado over the last few decades. The traffic is nightmarish — especially up and down I-70 during the weekends. There’s way too much terrible architecture in new builds. The homeless problem is abhorrent. Our wages have not kept up with the cost of living and affordable housing is a dire problem as well.

As is the Mission Ballroom.