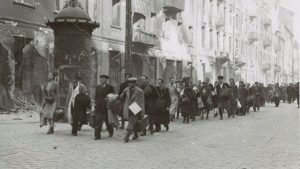 Jews being marched from the Warsaw Ghetto to the the central deportation area, May 1943.

“It couldn’t happen here. Not like that. Trump loves Israel.

His own daughter is Jewish. You’re being ridiculous.”

The timeline of Jewish persecution is a complete timeline of the Common Era of history. The two timelines are inextricably connected. Parallel train tracks that remain unbroken.

Expulsion from Rome in 19 CE. Massacres in Alexandria in 66 CE. Tertullian’s anti-Semitic Adversus Judaeos homilies in 200 CE. Constantine’s codification of the inferiority of Jews at the Nicaea Council in 325 CE. Babylonian persecutions in 468 CE. Forced conversion of Jews in Spain in 612. Expulsion of Jews from the Frankish Empire in 628. Forced baptisms of all Byzantine Jews in 632. All Spanish Jews enslaved and Judaism outlawed in Spain in 694. The First Crusades in 1096. The first Blood Libel in 1144. Rhineland riots in the Second Crusade in 1146. North African persecutions in 1147. Expulsion from France in 1182. Pope Innocent III’s “Jewish Badge” decree in 1215 (Hitler borrowed that one). Blood Libel in Germany in 1235. Expulsion from England in 1290. German Jewish massacres in 1298. Expulsion from France in 1306, 1321 and 1394. Black Death massacres in 1350. Massacres in Prague and Spain in 1389 and 91. The Inquisition. Expulsions from Spain and Sicily and Lithuania and Portugal and Brandenburg and Tunisia. Massacres in Lisbon and Venice and the Papal states. Ghettos created in Italy. The massacre of more than 100,000 Jews in Ukraine, and thousands more in the wars between Poland and Russia. And on and on and on and on. More blood libels. More ghettos. More expulsions. More massacres.

Today, I find myself growing more uneasy. To my right, I see a growing swell of hate rhetoric, of the embrace of fascist ideals and the steady increase of anti-Semitic acts across the nation. Last year saw a nearly 100% increase from as recently as 2015, according to the Anti Defamation League, who started tracking anti-Semitic hate crimes in the 1970s. Meanwhile, the Evangelical Christian right continues its drum beat of supposed “Pro-Israel” rhetoric in hopes of fulfilling their religious prophesy — that the messiah will come amidst a Jewish “return to Israel.” It’s core to their end-times belief. So any criticism of current GOP leadership’s pandering to the tiki-torch wielding, goosestepping brownshirts is dismissed with a wave of a hand and a “but Israel” self-righteous snub.

And on the Left, I see a growing condemnation of Israel as an entity — moving past valid criticism of the ruling Likud party’s policies to a louder drumbeat denying the right of the State of Israel to exist at all. And within that drumbeat are all-too-common anti-Semitic tropes as well.

Meanwhile, both sides seem to conflate American Jewishness with a first loyalty to Israel the country — another anti-Semitic trope that “dual loyalty” is a hallmark of Jewish dishonesty. And we find ourselves fending off “New World Order” and “George Soros!” and “Secret Jewish Bankers!” rhetoric across the board.

No, this isn’t a false equivalency. This is the result of more than 2,000 years of codified and institutionalized anti-Semitism across the entire planet.

So yeah, it’s an unsettling time to be a Jew. Just like it always has been.