A DiverCity conversation with a tenant farmer, a family farmer, who’s been on her family’s land essentially since birth. The death of the small farm in BOCO won’t happen if she has any say in it. Not today. Not after more than a century of time and investment here. 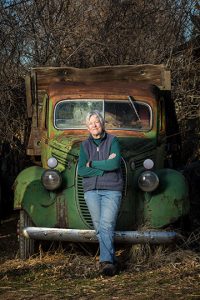 The history is incredible. It’s the kind of history that reminds us of the good and bad in our local history. Where we can look around today and see the remnants of the agricultural world that once predominated, we look back to when Catherine Long-Gates’ family farm was established, back in 1905, and realize it was a mere 41 years after the Sand Creek Massacre. 1905 was 114 years ago.

Her grandfather started a family farm focused on seeds and plants, the remnants of the seed business still prominently displayed inside their 25 acre North Boulder, Broadway ave location. Born in 1955 herself, Catherine says she always had the “advantages of being on a farm, having something to do constructive.” Her friends had a more conventional “city life, chores and things, but I had things I knew were really important to help the family and keep things going… but I’m also right here in town, and could also take part in all the things, go jump on a bus and go to the university, so it’s pretty good”.

The “only disadvantage, from my point of view,” Catherine says, “is there’s a lot about farming that I like about quiet and being by yourself, that’s less and less because we’re surrounded by [development] so everything you do you’re in a fishbowl.”

I pause to wonder if the fishbowl metaphor is apt. Modern family farmers stuck in small areas, completely surrounded, the rest of the world staring in (wondering what y’all doing in there stuck in the past and/or wondering when the land will be for sale…) but I ignore it and we move on.

Her grandfather (on her dad’s side) JD Long was born in Iowa. Diagnosed with TB, he moved to a “drier climate”, aka Colorado, expecting to last a bit longer. That was 1898. He ended up in Boulder because of a friend, Roland L. Dickensheets (real name, yes we laughed about it). He was the bursar at CU Boulder and they had become literal pen pals, owing to an interest in penmanship.

By 1905, her grandfather was a clerk at Noah’s Ark (a long defunct variety store) which he managed to buy. It was short lived in that iteration, however. “In 1098 Woolworth’s came to Boulder. That was the big box store for the time,” and recognizing the competition, recalling his background in seeds and farming, he moved to fill the niche demand. Long’s Garden is born.

It was her father who took the family from full scale seeds and plants, mostly gladiolas, and “transitioned us mostly into irises, for several reasons. One, the glads to grow traditionally, without using a whole bunch of chemicals, meant you were trying to grow in new ground and after WWII there became less and less agricultural ground around here, at least affordable.” Recognizing the water concerns of the region, irises made more sense as they were more drought tolerant and “they were also being hybridized a lot, so they were available in” diverse form and color. 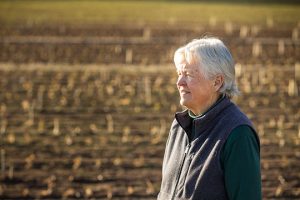 BoulderColorado.gov bears out the land claim, stating that, “Boulder’s population had not increased significantly since the 1920s. The 1920 census showed 11,006 residents while the 1940 census count was 12,958. After the first influx of new residents in the late 1940s, the count soared to 20,000 in 1950,” a huge shift in available land being the result.

Her and her husband, Dennis – a man who was in the service, and with whom she spent her few years off the farm, traveling with him – had no kids. Catherine was born in 1951. We talk about the population booms, from WWII forward, the last great migration in the 1990’s, before the marijuana migration, and she jokes that it’s “the last settler syndrome, because it’s always the last person that got here that always wants to shut the door.”

After three generations of family on this gorgeous little farm, there isn’t a fourth, but there is a plan. “We never got around to [having kids],” Catherine says. She points out that, as history has borne out across the nation’s farms, “if I did have a fourth generation, what’s the likelihood that they’d want to continue this?”

“I think the next generation are the non-profits that are on our property.” And this is important, because it’s where we glimpse a possible solution to the farming crisis (more solutions discussed in James Tyler’s Silver Tsunami article, pg. 33). Growing Gardens has been on the property for 21 years. Mountain Flower Goat Dairy have been there for eight years.

It’s important, especially the built in educational components of those projects, “a generation that can keep renewing itself. You’re not counting on just family.” Recently, the city of Boulder took steps to ensure what Catherine sees as important, a local component to the local food supply – aka not depending entirely on imported foods and large agri-business. Boulder voters voted to pass Proposition H, extending existing sales taxes and redirecting them to purchase a conservation easement; that is, to purchase Long’s Gardens and maintain them in perpetuity with the caveat than any tenants be actively engaged in growing crops, not just playing farm.

The fourth generation, at least for the Long family, is all of us. Catherine and Dennis determined to leave the farming of the future to all of us, to non-profits, to kids who value a return to simplicity as climate change, trade wars, and economies of scale decimate family farms across America. While no solution to the farming crisis is a silver bullet, Catherine has found a solution to our own local silver tsunami. Long’s Gardens forever.