In a historic vote  the House of R 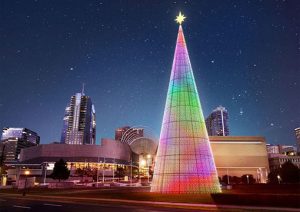 epresentatives approved two articles of impeachment against President Donald Trump. The articles of impeachment will now be sent to the Senate for a vote in 2020. • Centura Health, Avista Adventist Hospital received an A grade  in a recent report released by the nonprofit group, Leapfrog. Only approximately a third of hospitals surveyed receive this mark. • An Erie girl received an early holiday surprise of a fully decorated front yard courtesy of Sturgeon Electric and Children’s Hospital as  part of the hospital’s ambassador program. The girl has been an ongoing patient at the hospital and was nominated for the program. As part of the program, the groups decorated her house with holiday lights while she was away from school and greeted her with a visit from Santa, presents, and a festive house when she returned.  • Four Boulder Businesses were named in a listing of Colorado companies to watch that is released by Governor Polis’ office. The companies were Ozo Coffee, BOCO Gear, Scientific Aviation and Uplight. More than a thousand companies compete for this annual award and only 50 are selected. • Louisville Council approved a measure to increase the minimum age when residents could legally buy tobacco from 18 to 21. • Boulder County Sheriffs arrested a 16-year-old in connection to a bomb threat at Niwot High School • The Erie Town Board of Trustees approved a schedule for the process to take steps allowing the community to be governed under home rule charter. The ultimate process includes the formation of a commission to draft the home rule charter and an election by residents to approve the charter. If ultimately successful, Erie would join both Lafayette and Louisville as home rule municipalities. • The City of Longmont was named by as the number one boomtown in the U.S. according to the publication SmartAsset (full report here). Both Greeley and Denver were also included in the top ten municipalities on the list. Cities were ranked based on housing growth and low unemployment among other measurements • In Denver, BYOB will soon stand for bring your own bag. Denver City Council recently passed an ordinance that would charge a dime for each bag, paper and plastic, provided by retailers. • According to Boulder County health officials, Boulder has had 78 cases  of Pertussis (Whooping Cough) in 2019 up to the month of December. • The Mile High Christmas Tree was lit for the first time at the Denver Performing Arts Complex. It is 110 feet tall, 60 feet wide and lit with 60,000 LED lights. It is part of the complex’s sculpture garden and will be lit annually.

“My daughter is not old enough to understand the solemn task before us today. One day she will be, and I hope that she will know that this Congress had an obligation to defend our democracy, to honor our oaths and to  uphold the rule of law.”

“Such atrocious lies by the radical left, do-nothing Democrats. This is an assault on America and an assault on the Republican Party!”

The official statement from a Shambala representative about efforts by Historic Boulder Inc. to landmark a $4.9 million 1923 home on University Hill. John Kirkland, the potential new owner of the home is concerned the change would make property renovations more difficult.

“Roller Derby gave me something that I never thought I could do and a group to support me through life’s struggles.”

-Roller Derby Club Boulder County Bombers President Chelsea Pohl, on how the club is seeking a new practice space after an electrical fire

“The Community Protection Division of the District Attorney’s office (CPD) advises community members to bring chargers, cords and cables from home when traveling this holiday season, and to plug these into a wall electrical outlet rather than into a public USB charging station”