Not all heroes wear capes, some carry signs.

In October 2019, millions of people around the world turned out for the Global Climate Strike started by Greta Thunberg. Denver saw thousands turn out as well.

Find Yellow Scene Magazine’s coverage of this event here, as well as a first-hand story from a mother and daughter on why they got involved.

The term ‘Fracking’ is commonly used to describe Oil and Gas activity using hydraulic fracturing methods to extract – much to the chagrin of the Industry. Oil and Gas workers, who refer to themselves as “Energy Strong” are known to use aggressive online tactics to discredit organizations, elected officials, media, and individuals who speak out about the negative effects on health, safety and the Climate Crisis that Oil and Gas activity is contributing to. YS has been the target on more than one occasion, with terms like “retarded” used frequently in online posts.

To put this into context, in some communities there are 50 or more wells within a mile and a half of homes and schools.

Arrests at the State Capitol during Governor Polis second State of the State.

Aggressive tactics toward protestors are beginning to escalate as well when 38 people were arrested, including 5 minors, September 9 at the State Capitol.

Sergeant Blake White of the Colorado State Patrol is quoted in Westword as saying:

“We support lawful assembly and voicing your freedom of speech and all that,” White says. “But when it crosses the line, and it disrupts the Senate or House or anything going on, then we’re going to take action.”

We have to question statements by officers of the law that refer to the US Constitution’s First Amendment with terms that include “all that”.

Protestors held up signs that stated; “No Wells at Bella Romero. No More Sacrifice Zones.”

//In March of 2017 the COGCC issued Extraction Oil and Gas a permit to begin drilling near the Bella Romero Academy in January of 2018. Originally Extraction O&G had sought to place this operation near Frontier Academy Elementary School.  However, Extraction O&G came under pressure from the comparatively affluent parents of the students of Frontier Academy to not drill near that school.//

Mothers Out Front, stated mission “We build our power as mothers to ensure a livable climate for all children,” shares the story of one mom who has a student at Bella Romero. The school was also featured on The Daily Show with Trevor Noah.

We were able to speak to some of the participants involved. Activist Devon Reynolds told us:

“In his 2019 State of the State address, Governor Polis made a promise to take bold climate action and to protect Coloradans from all types of discrimination. In allowing continued fracking at Bella Romero Academy, and permitting over 2100 oil and gas wells in the first year of his administration, he has failed us on both counts. The Governor must take quick action to resolve these injustices, both local and global.”

Bernie Sanders, a Democrat presidential candidate, tweeted his support of the activists. 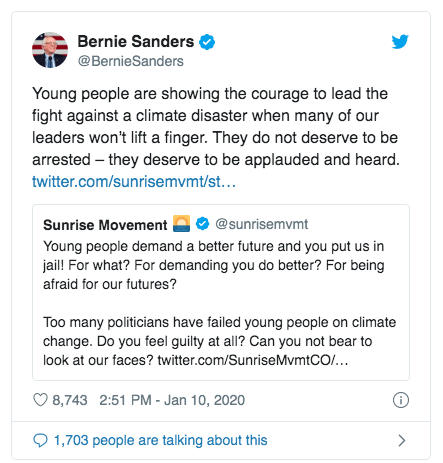 The GoFundMe Page that started to help the activists, states:

//Today, Extinction Rebellion Denver carried out a non-violent direct action to disrupt the annual State of the State address.  Rebels took action to call attention to Governor Polis’s failure to act on climate change and to the ongoing toxic nightmare known as FRACKING.

Members of Extinction Rebellion (XR) carried out a “mic check” before Polis began speaking.  This “mic check” served to remind everyone in the chamber that “in 2019, Governor Polis said he would ‘make sure that all of our communities have clean air’ and said he would boldly address climate change. However, he has failed to take on Colorado’s biggest contribution to climate change: fossil fuel extraction.”  The “mic check” ended with a call to “phase out oil, gas and coal extraction for the sake of the planet, and for the sake of our health.”

Two banners were displayed inside the chamber.  They read “No wells at Bella Romero. No sacrifice zones!” and “Tell the truth! We will not be silenced”.

Several XR supporters allegedly engaging in these actions were immediately arrested by State troopers.  Simultaneously, police arrested people who were seated near the disruption. One person was even dragged out of their seat and all the way out of the chamber.

As the police were escorting people out of the capitol building, numerous supporters of the Sunrise Movement, who had been in the hallway, were escorted outside by law enforcement where they were then placed under arrest.  They have a separate gofundme to cover their expenses here: https://www.gofundme.com/f/denver-youth-climate-activists039-bail-fund

In total, 38 people were arrested. 33 arrestees were taken to Denver Detention Center to be processed into jail. 5 minors were cited and released.

Extinction Rebellion is not going away.  XR is growing, and responding to police suppression with ever creative tactics.  As the climate emergency pushes the world into further chaos and exposes the underlying and persistent injustice of an economy based on resource extraction, more and more people are waking up to their own power.  Movements are being built to respond to ecological devastation with or without the support of Governor Jared Polis.//

Governor Polis has stated he does not want to ban fracking.

With 70% of what is being extracted out of the ground being shipped out of state, the health and safety costs to communities, the Climate Crisis increasing, and the fact Oil & Gas activity is less than 3% of our state economy, we are unsure how this industry has such a stranglehold on our legislative bodies.

Perhaps it is as our mama always told us; “Follow the Money.”

Bernie Sanders Responds To Colorado Capitol Protest Arrests: “They Deserve To Be Applauded”

Climate protesters just interrupted the Colorado House of Representatives ahead of the governor’s State of the State. I’ve seen several people dragged out of the chamber. pic.twitter.com/kqjllrZssn