The world teeters – as it is wont – on the precipice of revolution and reimaginations of antiquated, failed ideas. Yesteryear has never been as near as it is today, with a second, apparently failed run for president by Senator Bernard Sanders, the most consistent politician in America, being proven the only prescient candidacy we had. Medicare-for-All, worker’s rights, minimum wage laws, domestic economic concerns, and visionary leadership – things Americans voted for four times when electing and reelecting America’s most famous socialst, President Franklin Delano Roosevelt – are common concerns in 2020. Why? Well…

Coronavirus – also called COVID-19 or #theRona – has ravaged the planet and a lackluster American response (based on a failed American capacity under the Trump administration) threatens to upend the US in more ways that I can delineate here. 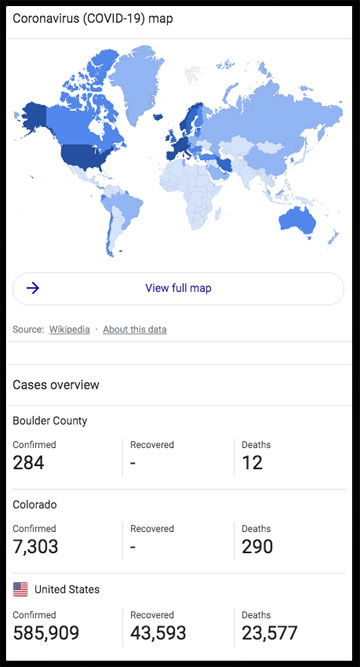 Governor Jared Polis has reacted strongly to the onset, even if a statewide shelter-in-place was needed sooner than was enacted, and is needed longer than currently planned. Locally, the Weld County Sheriff said he’d “rather take my chances with the virus than socialism,” an abdication of responsibility and a scientifically illiterate response to a crisis he is sworn to address; Weld County jail inmates have sued the Sheriff for risking the lives of inmates.

At the time of this writing, Boulder County has ~300 cases. Times-Call reports on Monday, April 13th, that we’ve had our 11th COVID-19 related death. America has over 20,000 deaths, taking the top spot globally for number of cases and number of deaths.

We’re all a little scared, and with good cause. CU students ended up with Coronavirus while attending St. Patrick’s day parties on the Hill, encouraging community spread. A local wedding in Erie was lambasted on local Facebook pages but, I was told, “no public shaming is allowed” so the original poster rejected comments pointing out the danger they posed to us locally. Driving around Boulder County for supplies I witnessed dozens of people failing to distance, enjoying life as if nothing apocalyptic was happening. Denver park and front range mountain community photos are shared with pleas for people to #stayhome.

These are the things that will bring this situation to a head, meaning overwhelmed hospitals, excessive loss of life, an economy in ashes. New Jersey reported that 700 police officers had the virus. Doctors and nurses are living away from family for fear of transmitting to their loved ones. California projects 56 percent of the population will contract it.

The virus has a 1.2 percent mortality rate. Some quick math: if we have a Boulder county population of 326,000 (give or take), and even 25 percent are infected, the mortality rate can be as high as 1,000 people (in just our little corner of Colorado). Predictions for the state are response dependent and range from ~350 to ~350,000. We’re already at ~300. While some of our neighbors are out playing, hanging out, having get-togethers, I’d challenge them to decide which 1,000 people they plan to sacrifice. If you can’t fathom it, think of your family and friend circles. Which 1 or 2 people in your immediate life can you live without?

That’s not math I’m willing to do. That’s why Yellow Scene Magazine offices have been empty, why everyone’s fully remote. We have writers retooling articles to address the moment. We have articles in progress. We have photographers in the street documenting the eerie silence of the world as the pandemic encourages us to remain at home. We’re still here, though, doing our jobs, documenting, writing, sharing your stories, being a conduit of hope and information – the two intertwined in dire times.

It’s your job to do the same: stay home.

Live your life as safely as possible. So much of the nation has it worse than we do. Colorado is a privileged state and no area more so than Boulder County. If you need help, reach out to a local mutual aid page. If you need contact, call friends. If you need air, it’s Springtime; go for a walk. And if you need hope, read YS. We’re here for you.

The world may be on its knees, in need of a long term reprieve, but ultimately that’s up to us. Everything Bernie was fighting for is being implemented or discussed; what was fringe in 2016 is party talking points, damn near orthodoxy, today. I once heard that a tax, once implemented, is never repealed. Once things change, they tend to stay that way. The changes being made now – considerations of a Universal Basic Income, payments to citizens, Universal Health Care, increased wages for “essential” employees, etc – have been long overdue.

Will we get to keep these benefits? It’s a tough question, rooted in our own personal capacity for action.

As you spend your nights with family, as people you know fall ill, as society is further strained, ponder the question: do we concede to power and go back to failed “business as usual” or do we demand the world FDR envisioned, the one Bernie fights for today, the one most Americans support (according to polling), a permanent implementation of universal healthcare, UBIs, and other forms of globally accepted social safety nets… or nah?

I leave you with the description of CoroNAH: Beyond the Pandemic, a mixtape by Denver’s favorite Democratic Socialist, Candi Cdebaca. It’s the hope I have for all of us, the actions I want us all to be engaged in: “Crushing on liberation. Breaking up with capitalism. Celebrating socialism. Flirting with revolution. Drunk on love. Seducing imagination. Ride the rollercoaster with us! For our people.” For our neighbors. For our nation. For our survival today and always.