The fight against common sense in the name of liberty 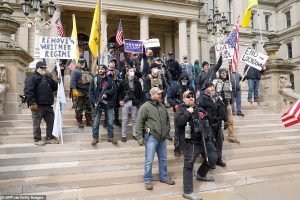 Protestors gather on the steps of Michigan’s Capitol Building in Lansing.

Thousands of people drove into town and surrounded the state capitol, intentionally causing a traffic jam. This protest was a symbolic gesture from people upset with the governor’s ‘Stay Safe, Stay Home’ order in response to the Coronavirus Pandemic which has killed over 32,000 Americans since January 2nd, 2020. 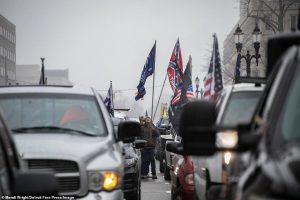 Despite the organizer’s requests for participants to adhere to social distancing guidelines and stay in their cars, many of the protestors got out of cars and congregated much closer than the required 6 feet, and a large percentage were not wearing any sort of face covering.

Michigan already has the highest rate of deaths from COVID-19 in the nation, and many are already predicting the surge that will occur in 2 weeks among the people who participated in this protest. While it is easy to understand the economic fear COVID-19 has caused worldwide, it is difficult to understand the thinking that goes into protesting an order designed to protect people in the midst of an ongoing crisis.

So what was the point of the protest? If you listen to the protestors interviewed, they were objecting to what they feel is the  erosion of their rights, the unconstitutionality of the stay-at-home orders and social distancing guidelines sweeping the nation. They chose to show their disbelief of the situation by breaking every single one of the guidelines and laws.

While some claimed they understood the safety component of the stay-at-home order, they still parroted the president by insisting the country is ready to be opened up.  Additionally, their very presence at the protest and their complete disregard of the guidelines being adopted worldwide showed that they clearly do not understand the nature of the threat that COVID-19 poses. 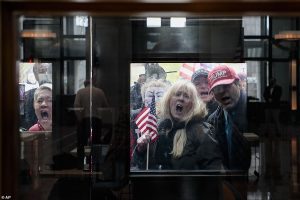 Looking at the behavior, it seems more like a tantrum at being told to do what is common sense, like a child throwing a tantrum when being told to eat their vegetables or to wash their hands.

Perhaps looking at whose behind the rhetoric designed to inflame citizens can help us better understand this complete disconnect in logic. The protest in Michigan was organized by the Michigan Conservative Coalition (a group of pro-Trump Republicans) and promoted by the Michigan Freedom Fund, headed by a long-time DeVos family employee. The Acting Director of the Office of National Intelligence posted a picture of the preamble of the Constitution on social media, with the caption “Signed permission slip to leave your house”. Donald Trump has been fomenting this “anger” at stay at home orders with calls to “liberate” states that are under protective orders. It’s no wonder that this ridiculousness is spreading far and wide.

In Trump’s push to reopen the country against the recommendations of all medical and science experts, and MAGA supporters ensuing protests of Stay at Home orders, they apparently forgot that people are still getting sick, that people are dying. The United States reached 2400 deaths in a single day two days ago and the world has reported over 153,000 deaths.

While protesting the stay-at-home order in Michigan, conservatives outfitted in MAGA hats, waving confederate flags, openly carrying firearms, and chanting “lock her up” blocked access to a hospital, so that essential health care workers trying to care for patients could not get to work.

Trump’s bombastic base have somehow made fighting a virus into a partisan affair, and this unsafe partisan showboating is coming to Denver this coming Sunday. If you are one who understands that COVID-19 does not care about your party affiliation or your beliefs in government overreach, you’d do well to avoid downtown Denver on Sunday.

View all posts by Ash Shaikh →