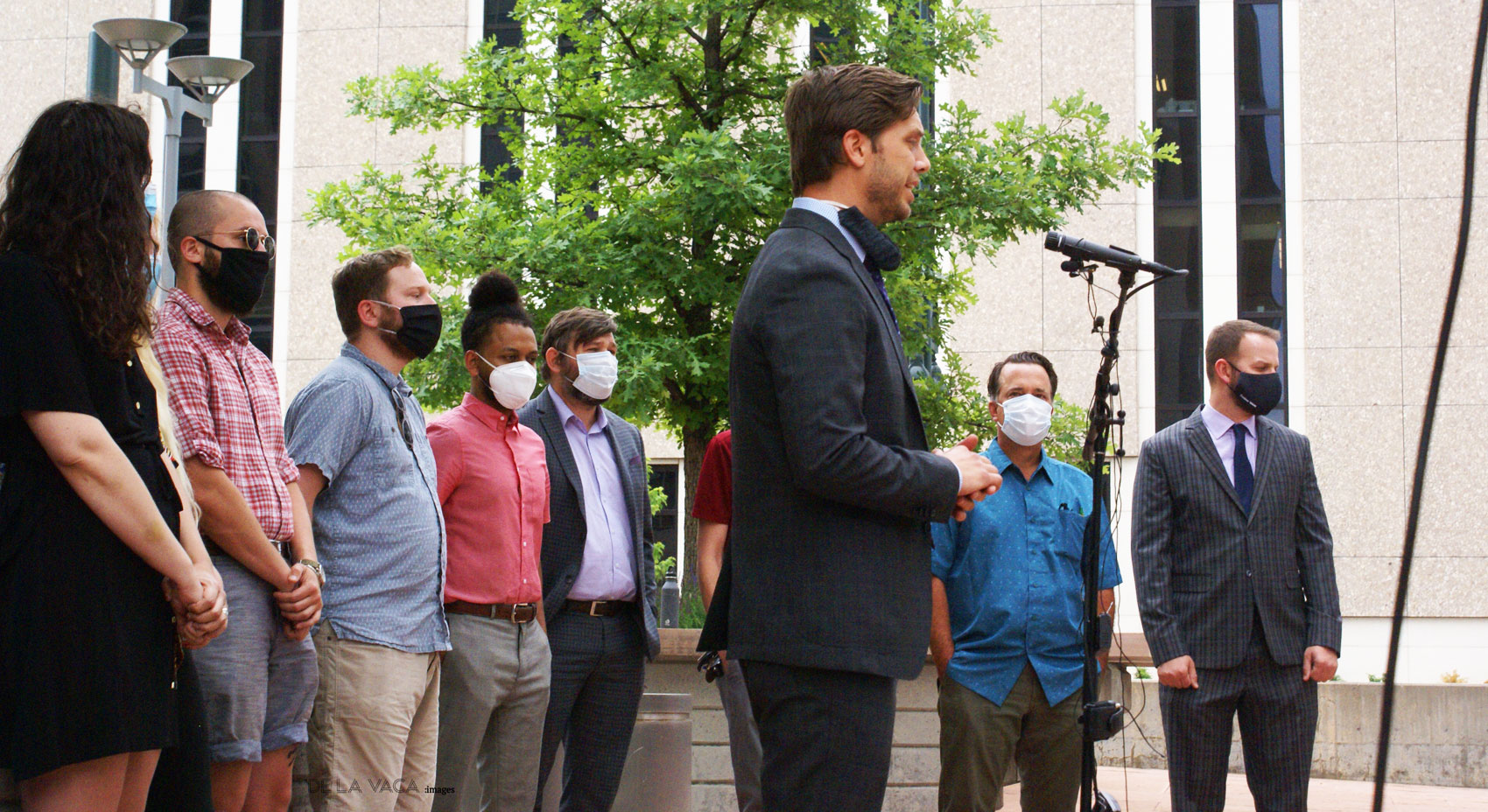 All images by De La Vaca for Yellow Scene Magazine 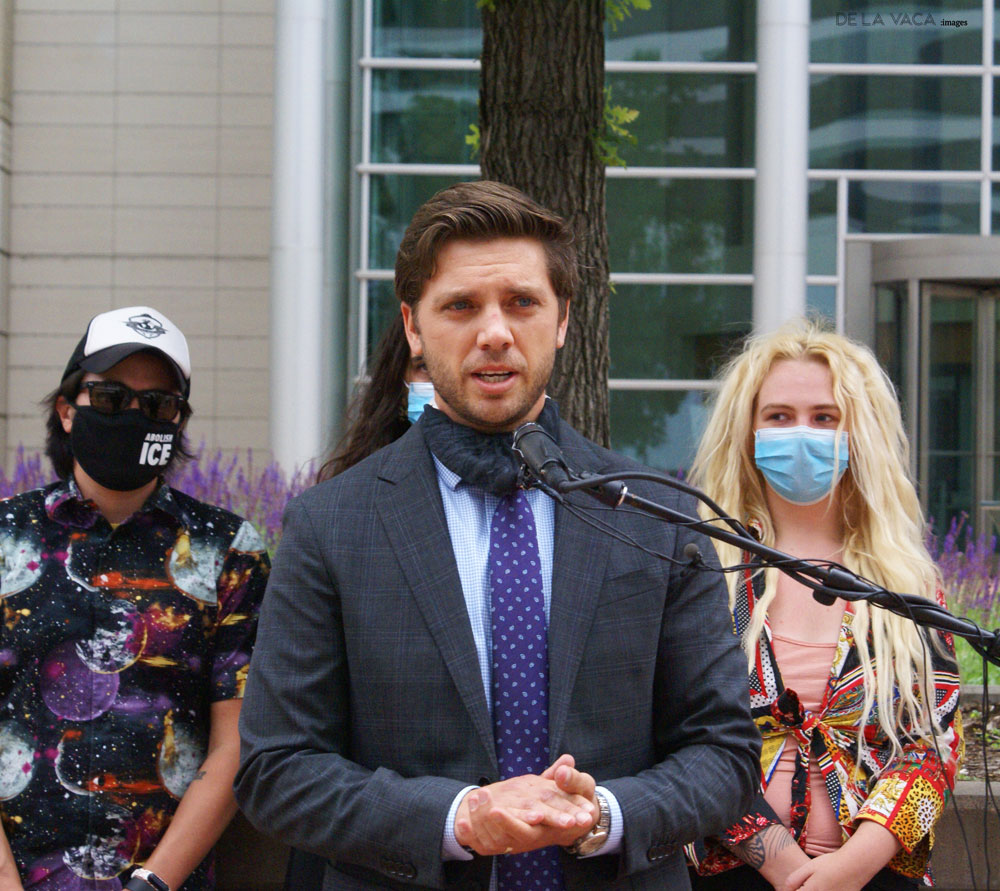 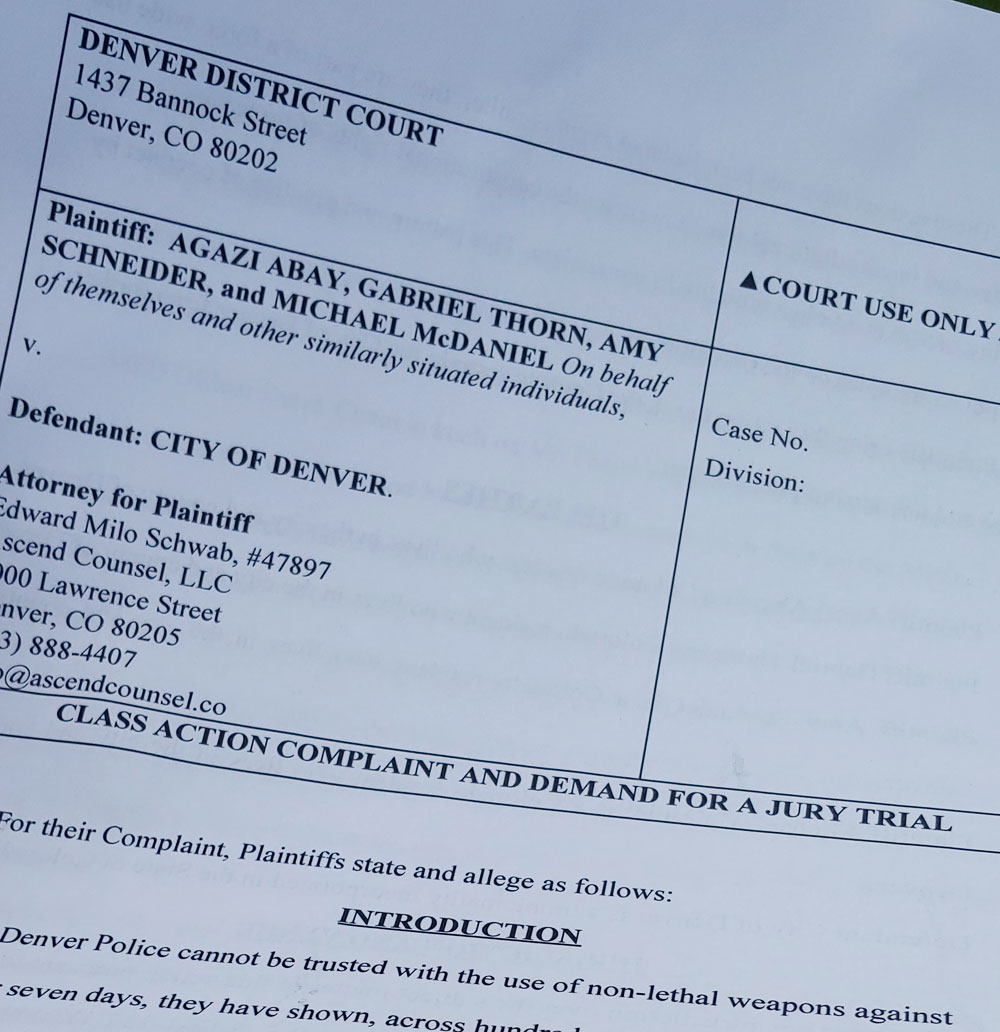 [Update: Within minutes of posting this I was called and told that the judge was going to rule tonight. This was confirmed by both Brad Evans and Mike McDaniel, who said “We had an emergency conference call hearing with the judge and opposing counsel at 6 and expect a temporary restraining order against the DPD tonight.”  The state, from what I was told, is not happy.]

At 3 p.m. this afternoon, in front of the Alfred A. Arraj Federal Courthouse on 19th Street in downtown Denver, Denver lawyer Edward Milo Schwab announced a class action lawsuit against Denver Police Department. Stating that “the Denver Police Department cannot be trusted with the use of non-lethal [what Schwab called “less-lethal” during the press conference] weapons against protestors, the various allegations include excessive force (count 1) and first amendment violations (count 2). The lawsuit was filed in court yesterday, June 4, seeking a trial by jury, but was deferred to Federal court, denying “Denver citizens a voice,” said Schwab.

On the ninth straight day of Denver protests, arguably spurred on by police aggression, the incidents that comprise the lawsuit, outlined in a 25 page filing, specifically address numerous police shootings of street medics and local media, who were engaged in covering and/or supporting injured persons who participated in the “Justice for George Floyd” #BlackLivesMatter protests. These protests began in Minneapolis but quickly spread across the nation, including to here in Denver, Longmont, and Boulder, with an Erie march planned for next week and other statewide protests.

The lawsuit focuses on the experiences of four specific persons: Agazi Abay, Mike McDaniel, Amy Schneider, and Gabriel Thorn. Schwab said that in the upcoming hearing we will hear from the four plaintiffs “and others”, leaving open the door for other injured parties in the Denver metro area to join the class action lawsuit.

Speaking of her experience with the police, Schneider said that that “Monday night was really one of the most traumatic nights of my life,” recalling that after helping with some imjured folks, though not there as a medic, and after being targeted with pepper balls and watching the injured fall around her, she “was just trying to get home safely and make sure everyone around me got home safely,” but she “was still tackled anyway.”

Mike McDaniel, a friend I know from the local political scene, spoke about helping a Black man who had “staggered out of a cloud of tear gas,” offering him milk to ease the pain, just him and the injured party in an alley, and they were subsequently fired on a second time by officers. Why the Denver Police felt it necessary, and whether it’s legal, to shoot at a community volunteer medic who was helping an injured party will hopefully be uncovered in the course of this lawsuit.

While we believe tear gas, which is a banned weapon of war, should never be used against civilian populations, I am also against the use of “non-lethal” munitions like rubber bullets and pepper balls being used against a non-violent crowd. Understanding that there is a difference in the definition of “peaceful protest” between the lay protestor and the police, I also believe that there are more suitable measures for crowd dispersal available to local police. It has been pointed out that in Hong Kong, over the course of 455 days, there were only two deaths, with 9000 arrests, an average of 19.7 per day, while America’s first 7 days of protest saw 13 deaths and 5,600 arrests, averaging 800 per day. 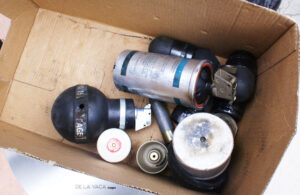 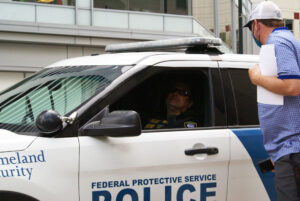 Questioned on the use of other non-lethal weapons, what was inappropriate for police to use, or not, Schwab said that he couldn’t answer, having not seen any examples of police using their weapons constitutionally. Regarding the weapons mentioned in the brief – rubber bullets, tear gas, and pepper balls – Schwab said that, “I’m not sure that the police can be trusted to use them constitutionally.”

Even while just setting up for a press event at the courthouse, replete with cameras and press, Federal police showed up, ostensibly to let their presence be known and check on us. Brad Evans, media event organizer, went over to greet the office and told him, unironically, “we’re not here to protest”. I can’t help but feel like that is already an indictment of the relationship poliuce have with locals, and now with the local media. We shouldn’t have to assauge any police fears to do our jobs without concern for our safety.

As a Denver Metro journalist covering the protest, I was myself targeted by the Denver Police Department and Aurora Police Department, who brought tanks and were assisting in the suppression. I was shot three times over the course of three days of coverage. I was shot twice with pepper balls on my first day or coverage, 5.30.2020, while holding a camera and wearing a clearly identifiable press badge. On my second day of protest, 5.31, I was shot with a rubber bullet in my left testacle, an injury I feel still, while standing still interviewing a street medic on Colfax, near Wendy’s, while clearly holding a camera, holding a cell phone to record video, displaying a press badge, and very clearly wearing a white helmet with the word media written on it four times.

I can think of no more obvious targeting of journalists than in my own case, though there are several that are noteworthy, including targeting Denver Post journalists who had very large cameras and press identifiers on him. The lawsuit brief is replete with horrific examples.

We look forward to following this case to see the outcome. It should be noted that I was asked to join the class action lawsuit and, if the opportunity is there, I most likely will. We fully believe in standing for freedom of the press, especially in the age of Trumpian “fake news”. We believe in police accountability. And we believe in standing for the right of protestors to exercise their first amendment rights free of the threat of police violence. Notably, this morning, it was announced that the colorado legislature is proposing a bill to make it a fireable offense for an officer to not stop “inappropriate use of force,” called the Police Integrity and Accountability.

“It would appoint the state attorney general to independently investigate use of force cases that result in death or serious bodily injuries, and removes immunity from prosecution for officers, opening the door for individual lawsuits,” according to reporting from Fox 31. “On top of that, the bill would prevent officers from finding work at a neighboring department if they’re fired.”

“It will strip your immunity from criminal prosecution and civil action if you kill someone,” Rep. Leslie Herod said. We look forward to a world where no one is above the law. This class action lawsuit may be a great step in the right direction.