All images by Paul Wedlake Photography

Brian Ball is the definition of a media Swiss Army Knife. The man can – and did – do it all. Hot headed and heavy handed, and also incredibly lazy by his own admission, he is one of the few people in our 20 year history to successfully navigate more than one, more than two positions at Yellow Scene…and keep writing even after quitting in a less than great way.

If you meet him, you know. He’s charismatic as all hell. A metaphorical fireball of loud laughs, weird faces, great stories, and gesticulations that make sense for a guy who’s been running Square State Skate for a clean decade. We actually met at Square State for this fourth installment of the Ourticles series. In that sense, it’s really nice to chill out and have a casual conversation with a guy who A. knows YS like I know YS, and B. is a skater like I was for my entire youth.

I’m not a kid anymore, folks. Let’s not dwell on it. I know if I get on a skateboard today and try to do anything but stand or roll slowly, I may injure myself. Hah. I’m only half joking. Brian’s not a kid either. He joked about his own back injuries and reminded himself to wear a helmet while almost landing a trick he tried about a dozen times. #ActionShots 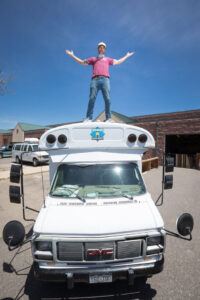 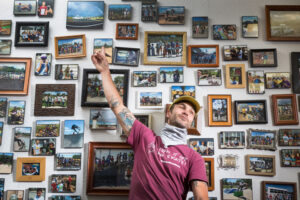 “It sounds like you know more about it than me,” he fires off. I don’t. He’s quick. “What did you do at Yellow Scene, when you first came here,” I ask. He’s done it all. That wasn’t on my spreadsheet.

Brian started as an graphic designer. As the current editor I can confirm that I have no clear idea what that means for someone working in 2007. Faxing things maybe? Taking rolls of film to be developed. It seems like so long ago. Anyway, I digress.

“I wasn’t really qualified, but I applied anyway and I sorta lied my way into it,” Brian tells me. Resume embellished. Hilarious. My kinds of guy. What else? “I did have some skills though. I knew photoshop. So Shavonne put me to work doing ads, too.” Ah. Swiss Army Knife.

Recognizing potential is a skill set Shavonne has. Brian recalled this fact, telling me about Shavonne and Eric helping him cultivate his skills. Taking an embellished resume and polishing it, taking photoshop skills from a previous web job and turning him into a designer. Taking a snarky inter-office email sender and turning him into a writer of some repute – and consternation – here in the Boulder County community.

“There were fights, there were moments,” he recalls, “but it was mostly because I was lazy. Shavonne would ask for an ad by noon andI was just doing sketches at 2 pm. Stuff like that.” I can relate. Who can’t?

But lessons are learned. As the writer of Wrecking Ball, a long running column that became known as a knock down, drag out brutalization of some aspects of local society, his final YS iteration, Eric taught him about voice. Specifically, about how to listen to his writing as someone else would hear it, as part of the editorial process. That’s a tough skill to teach, one I’m not sure I’ve learned myself. Imagine being able to hear yourself as someone else hears you, but through writing instead of speaking. That’s powerful.

From Shavonne, he told me, he was taught how to work hard. Back to that lazy comment. We circled back to it, somewhere between our photoshoot on the ramps at Square State Skate – a cute reference to the shape of Colorado – and him climbing on top of the Skate bus for completely unnecessary but awesome photos. As a business owner now, he points out, and for the last decade, he’s been forced to reckon with his youthful laziness. “She’s done it for 20 years,” he points out, also pointing out that Shavonne’s work ethic, long days, day after day, year after year, for 20 years, is a model to learn from.

Ultimately, Brian quit Yellow Scene. He tells me he wasn’t very proud of how he quit. A friend had offered a job teaching skating at the Y and – after missing a Lou Reed show he had planned with his grandfather over a deadline – he walked outside, called to ask about the job, and left.

He wrote Wrecking Ball as a freelancer for a while after leaving, but skateboarding was his passion. He grew up doing it. He left YS to do it. He made it his lifelong project, his career: skating, teaching skating, inspiring the next generation of skaters. But…and this could be fun, he told me he’s open to bringing back the Wrecking Ball. Should we let him?