Four days ago, the Longmont Times-Call reported on Twin Peaks Charter Board member, Michelle Kieser, who questioned the veracity of the video showing George Floyd’s death, alongside mocking the use of masks in the face of the Coronavirus pandemic to Board member Anna Gravelle on a Facebook post.

Both Kieser and Gravelle have removed these posts, but Kieser said in a written statement that her comments were taken out of context.

From the Times-Call article: “Twin Peaks Board President Regina Casey, in a written response to the NAACP, called the request to convene a meeting to remove only one board member “problematic.” While it’s listed as an option in the school’s bylaws, she wrote, the bylaws are out of date and don’t reflect current state law.”

However, Friday, June 10th, 2020, more inflammatory posts were made by Gravelle using the same image as another twitter account by John Cardillo, who appears to be a right-leaning extremist.

The Twitter Post Gravelle reshared, calls Black Lives Matter protestors “savages” and states that, “threatening to beat a woman is the norm for BLM”. Gravelle writes that the black man featured in the photo is threatening to beat people praying, and also called it “anti-Catholic bigotry”. 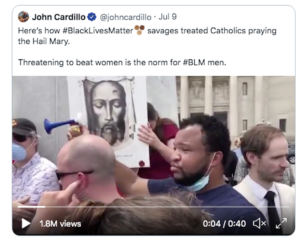 We did a Google Image search of the photo used in the original post that Gravelle reshared. The search results did not tie the photo to any found articles. In fact, Google titled the image: Crowd with no other sources for the image. 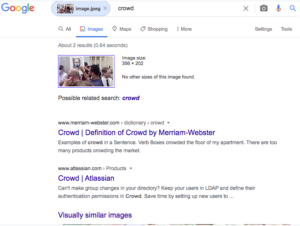 A Charter school board member resharing posts calling people of color “savages” – without discussing the origins of the term, which was steeped in racism when it was coined – at the very least is tone-deaf. This brings us concerns that will all children have a safe and equitable experience at the school?

Twin Peaks held a board meeting yesterday to discuss policies.  In the discussion around social media practices, Kieser demonstrated an understanding of the impact of her social media statements. Unfortunately, Gravelle went the path of defending herself and seemingly lacked an understanding that social media is public and that her comments were harmful. Much of the Board meeting resulted in an emphasis on “free speech” more than the safety of the children.

Becky Kelly is on record telling YS; “I continue to hope the Board will take action to ensure a safe and equitable place for all children of St. Vrain Valley School District, and hope they focus on the safety of the children attending Twin Peaks Charter Academy in their policies.”

While Twin Peaks is a charter school, it is still a public school and receives tax funding from the school district. Having board members who are openly allowing their religious beliefs and what appears to be personal biases to color their views against people who would be in their school district is more than problematic.

Excerpt from the Times-Call article:

//The Facebook post was made by board member Michelle Kieser in a reply to another Twin Peaks board member, Anna Gravelle. In her reply, Kieser questioned the veracity of the video showing Floyd’s death, according to a grievance Kelly filed on June 7. Floyd, a black man, died May 25 after a Minneapolis police officer was seen on video kneeling on his neck for almost nine minutes.

In her Facebook post, Kieser wrote, “I don’t even know if I believe the video circulating that caused the riots. Too many off things about it and it doesn’t add up. Paramedics not dressed as paramedics and they did nothing just rolled him over while still cuffed and took him away, one side of the street video shows no bystanders, otherwise apparently three-four people telling them to stop, the officer and Floyd worked together at the same club as security guards, etc. etc. etc.,” according to the grievance.

Kelly, who has one child who will be a senior at Twin Peaks this coming school year and another child who had attended the charter before opting to switch to Longmont High School this year, said Kieser’s social media posts also appear to dismiss public health guidance to prevent the spread of the coronavirus, including wearing masks.

Kieser and Gravelle expressed interest in participating in activities to “fight to get our kids back to school.” Kieser also questioned shelter-in-place orders, likening them to a “tyrannical overthrow of the US government and the world” and encouraging others to ignore the guidelines, according to the grievance.

The posts mentioned in the grievance have since been deleted.//