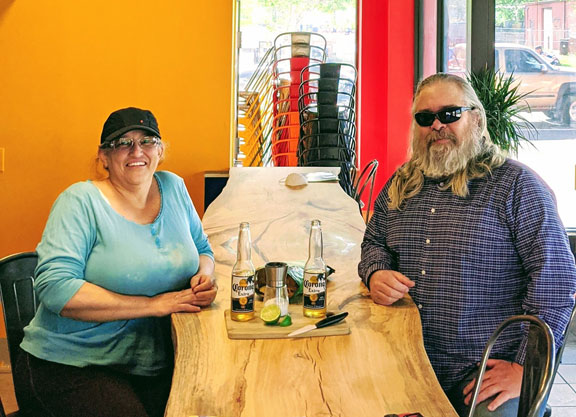 Tierra Y Fuego Taqueria translates into Earth and Fire Taco Shop. It is a name so perfectly aligned that it must have been divinely inspired. Tierra Y Fuego got its start in 2012 when owners, Pepe Diaz and wife Veronica, moved from Southern California to Boulder,. Within two years they had started the Diaz Family farm on 28th and Jay and turned it into a Community Supported Agriculture (CSA) model.  Searching to increase possibilities, they opened up a food truck on its grounds in 2018.  We started “selling tacos from the farm,” says Pepe and, “that was an instant hit.”

A year later they found a permanent location at 4550 Broadway in Boulder. It took nearly seven months to design, receive approval, and finish the buildout of the current dream. At the same time, Covid-19 hit. That could have caused a lot of heartbreak, but once again, the Diaz family continues to push through. Tierra Y Fuego Taqueria has been open since May 2020 for lunch and dinner and now also offers breakfast. With plenty of outdoor seating, customers can once again feel comfortable experiencing the small joys of life.

Everything on the menu is freshly made and many ingredients come from the Diaz family farm. I spent time with Pepe on a Taco Tuesday and, as such, tried some of the most authentic tacos Colorado has to offer. Pepe focuses on simplicity and execution of each dish to allow for the authentic flavors to rule the experience. From slow cooking and braising to smoking and infusing, one learns to appreciate true Mexican flavors in the Colorado foothills.

The Taqueria is a fusion of Northern and Southern Mexico cuisines, specifically from the Coahuila and Michoacan regions, as that is where he and wife Veronica hail from, respectively. There is nothing skimpy here—prepare for a solid amount of protein on each dish. He smokes his brisket as well as costillas for over ten hours and infuses the dishes with flavors from the south, like the chocolate-rich chicken mole. The barbacoa taco with diced onions, cilantro and a lime wedge to squeeze over is exactly like one would experience south of the border. Perfection is on display with what I have dubbed the Seafood Tacos: the best, west of the Mississippi.

Ganas in Spanish roughly translates into “desire” or “motivation” and Pepe Diaz’s life is analogous to it. He learned to love food with his family during weekend gatherings of 20 to 30 family members when he was a child. His parents got divorced, however, and things changed. Pepe’s mother moved to the states for a fresh start. A couple of years later, at eight-years-old, Pepe too followed his mother when he landed in the dead center of South-Central Los Angeles; Watts, to be more precise.

In a predominantly black neighborhood, the White looking, Spanish speaking immigrant stood out. Naturally, Pepe was bullied. “I learned to run,” he laughs, as a way to survive.  That drive to overcome caught the attention of administrators at an East L.A. magnate school and the experience of bussing into that neighborhood and James A. Garfield in the 10th grade once again shaped and changed Pepe’s future.

Pepe was inspired to focus on computer science and math by the famous teacher Jaime Escalante, whose life story was made into the movie Stand and Deliver. Escalante zealously worked to pull greatness out of his students by motivating them to persevere in any and all situations. “I learned to swim or sink” throughout life, says Pepe. Those lessons continue to be passed down to his kids, Abigail, Andrew and Allan, who work at the family restaurant and continue the traditions.