Alec started in the industry at 14-years-old as a dishwasher in a local restaurant in Long Island, NY. Within two years he had been promoted to a server where he mastered the art of gab, customer experience, and anticipating client needs.

He left the East coast to attend CU and he says, “he never turned back.” A triple major in the sciences, Alec decided not to pursue in life what he studied in college as an internship in the field did not resonate as strongly as connecting with people and food.  Additionally, it was hard at the time to make money in entry-level science research fields. Upon graduation he spent time as a camp counselor, further honing his skills elevating people and then served at the top restaurant on the Jersey shore: 410 Bank Street. It was there that he learned to execute the entire culinary experience to perfection, and he decided to spend the remainder of his professional career in the restaurant industry.

At the age of 21 Alec took his talents to the Natural Gourmet Institute in Manhattan where he learned the intricacies of what would make him and his restaurants a staple in the Boulder Valley: Healthy Foods that taste astounding. The plant-based culinary arts expertise that he mastered fit in exceptionally well with the needs of Boulder.

Arugula was Alec’s first restaurant manifestation, in 2009. Within 2 years, he more than doubled his footprint and used some of the area exclusively for Tangerine while he invented an idea of shared space between the two restaurants. Tangerine would use part of the shared dining experience for breakfast and lunch and Arugula would take on the area for expanded seating during dinner. The move created some challenges for Arugula, as the kitchen was not necessarily primed for the added complexities. As the lease was renewing, Alec thought it wise to focus on the “Healthy American brunch format” with Tangerine. 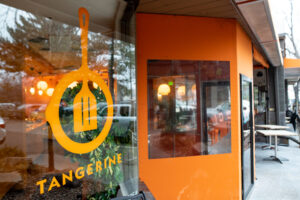 “It took four years to find the second location,” Alec shares. His patience paid dividends as both locations blossomed and people use them as destination breakfast spots in and around Boulder. We sat down and shared an Eggs Benedict “flight” with four delectable favorites as well as their chicken and waffles. The Turkey Brie was a smashing hit! The flavors were perfectly balanced. Tangerine’s chicken and waffles puts Roscoe’s (home of the original chicken and waffles) to shame. Yes, I said it. The fluffy waffles were well paired with the cinnamon butter and balanced seasonings of fried chicken. I also recommend the golden latte with almond milk to round out a comforting breakfast experience. 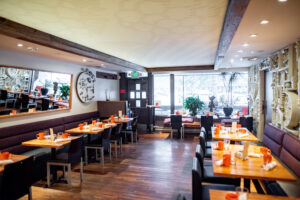 His team has been with him for years. Alex Miller, the General Manager of the Boulder location, has been with Tangerine just about six years while Justin Medlin has been with the organization for eight. Alec says that these two leaders know the business even better than he does and allow him to focus on other aspects of the business such as marketing and promotions, to go along with his other renaissance man ownership duties.

Alec and his wife Gabriella have four boys, Bruno the eldest, Sandro, and fraternal twins, Gabriel and Marcello. The oldest of them plans to start working at Tangerine just as soon as possible, similarly starting his career in the industry at 14-years-old as well.