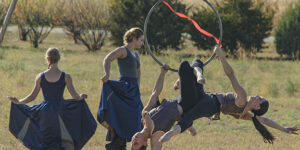 Frequent Flyers at the Westland Development

While opportunities for live performance may be scarce these days, many organizations are finding ways to perform outside, where social distancing is easier and the air is safer. Frequent Flyers Aerial Dance is one such group, preparing a packed evening of dance and food. On Aug. 23, the acrobatic, flying troupe offers a picnic meal along with a performance in their large parking lot. The meals come from Blackbelly Restaurant (pre-order is required) and include your choice of items like Colorado Native rotisserie chicken, smoked pork or vegan grain bowls with seasonal veggies. The show kicks off at 6 p.m., tickets are $55 for adults and $50 for children, or you can opt for the show only with no meal for just $25 per person.

Adam Cayton-Holland at Semblance of Normalcy

When we last chatted with Adam Cayton-Holland, his TV show, “Those Who Can’t” had just been picked up by TruTV as their first scripted show. Since then, he’s released a staggeringly beautiful memoir of his relationship with his sister and her suicide, Tragedy Plus Time (Gallery Books, Aug. 2018) performed a thousand shows all over the map and now just released his fourth album, Semblance of Normalcy (Comedy Partners, Aug. 2020), arguably his best outing yet. An accomplished storyteller, Cayton-Holland has a remarkable ability to weave a colorful tapestry out of a single thread of an idea, brilliantly illustrated on the track “Prices and Participation May Vary,” where he yanks a throw-away line from a McDonald’s commercial and builds an absolutely, lights-out hilarious narrative that’s equal parts absurdist and cutting. Pop over to your favorite streaming service and give it a listen.

With limited entertainment options, many venues and museums are finding ways to use technology to fill the much-needed gap in weekend activities. The Longmont Museum  launched a new walking tour mobile app for your year-round walking-tour needs. The content was actually developed by their own Curator of History, Erik Mason, and includes text along with audio recordings and photos that guide you through more than a dozen locations from your own smartphone device. Learn about the railroad that helped shape downtown Longmont, get all the behind-the-scenes info about the longest continuous business in Longmont or explore the Dickens Opera House. You can even learn about the Masonic Temple fire of 1905 and the fascinating story of hotelier George Zweck.

The free app is available in both English and Spanish at tourlongmont.oncell.com.

The CBDs at GrossenBart Brewery

Thanks to the team at GrossenBart Brewery, there are still a few ways you can enjoy live music and an ice-cold beer on tap. On Sept. 26 at 6:30 p.m., GrossenBart Brewery welcomes New American Hippie troubadours the CBDs, a funky rock quintet with an expansive cover list ranging from the Allman Brothers to the Grateful Dead to Van Morrison to Warren Zevon and dozens more. They’ll be playing outside — social distancing protocols will be adhered to — and it is requested that you bring your own lawn chairs (and masks) for this in-person-not virtual performance.