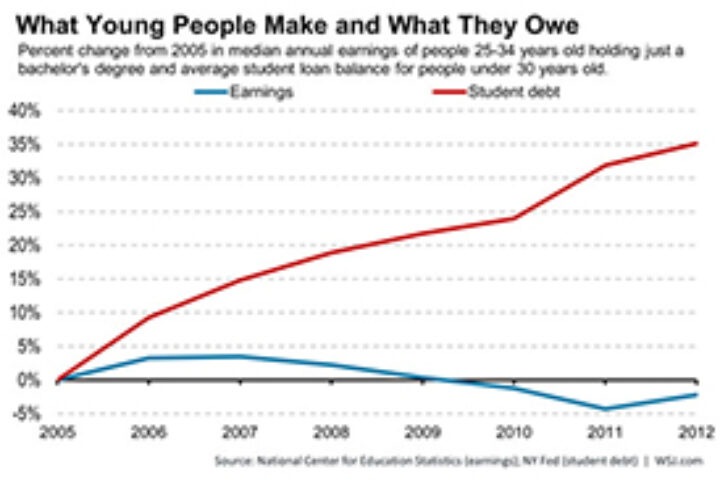 To Debt or Not To Debt: Questions and Quandaries in Higher Education Finance

Vicki Davis and Nolan Carey are average Boulderites. They live with their seven-year-old son, Lincoln, across from me in a small two-bedroom apartment near the center of the city. Carey is a Ph.D candidate in the University of Colorado, Boulder theater program. He’s currently finishing his dissertation. Davis, who works in business consulting, spends much of her free time volunteering for a non-profit. But she also has a new job this summer: United States Census Bureau. I have a lot in common with them. I’m a single mother and a Ph.D candidate. I volunteer, and I work a second job. Why? While we would love to have extra time to pursue our activism and creative passions, there’s something we have in common with over 44 million Americans: we graduated from college with thousands of dollars in student debt, for a national total of $1.6 trillion in 2020, according to Forbes Magazine. To debt or not to debt, that is the question. 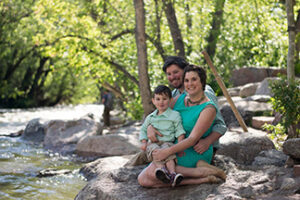 When I meet Davis for our interview, she’s carrying a cell phone in each hand: one for the census, the other her personal phone which she also uses for work. A sociology major with Master’s degrees in Public Administration and Nonprofit Management, she currently works as a consultant who helps businesses with what she calls the “triple bottom line” – take care of their people, the community, and the planet. She’s ambitious, opinionated, and conscientious. Carey, her husband, is affable and mellow. They’re the community-building type, the family that knows every other family in the neighborhood. They’re also over $100,000 in debt. “It’s hanging around one’s throat,” says Carey. “Breathing down one’s neck.”

Both Carey and Davis graduated with their Bachelor’s degrees over a decade ago, and their graduate education substantially increased their debt. Yet the student loan debt burden on Americans across the country is staggering, with Forbes reporting that the average amount owed by Americans over the age of 18 is $32,731. “We know college is an investment,” reads the CU Boulder Office of Financial Aid website. They’re not lying. At CU Boulder, like many other colleges and universities around the country, the financial aid system revolves around a number called the Estimated Cost of Attendance. For the 2020-2021 school year, this number is a staggering $28,886.

Although the university’s Estimated Cost of Attendance doesn’t include the cost of mandated health insurance, that number is used as the university’s official guess at how much college might cost for a student. It represents what is typically the maximum that students are allowed to receive in aid. There are exceptions: a student parent who needs to pay for child care may extend the Estimated Cost of Attendance by the amount that the childcare will cost. Yet grants that are offered to students with financial need still don’t cover the entire cost of college. Grant eligibility is largely determined by residency and by a student’s EFC, or Expected Family Contribution. Many students are ineligible for grants entirely because their EFC is above the income threshold, often for arbitrary reasons. For students in these situations, and even for students with EFCs of 0, the exorbitant cost of higher education means that loans become unavoidable. Beyond grants and loans, other sources of income are hard to come by.

Eric Buikema can verify that. “Getting scholarships…” he says, “If you weren’t an athlete or an honor student, it was nearly impossible. I had to borrow three-quarters of the total each year.” Buikema is in his mid-twenties. He’s a fairly recent graduate, but he’s already lived through a myriad of post-undergraduate experiences that, the more I talk to people, seem to be the rule rather than the exception. Originally a history major, Buikema is now a health coach at a local gym. He loves his current work – and after having to work two jobs on top of his undergraduate coursework, he’s no longer convinced that what he learned in school was useful, or that a traditional four-year college is worth the crippling debt. “I know others who never went to college and can afford to live on their own,” he muses. “Me? A majority of my paycheck goes to paying off those loans, and it will be that way for the next eight to ten years.” 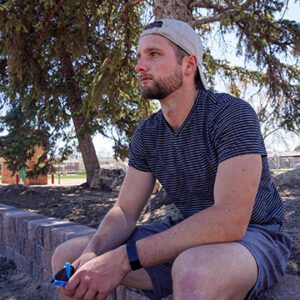 On taking debt, Erik is clear: “If you ask me,” he says, “It’s the most popular scam out there. College, for ninety percent of people, is not going to be worth it.” We didn’t verify his stat.

So, student loans are big business. But does a graduate’s debt burden really put them at a disadvantage compared to someone who pursued employment directly out of high school? I did some research to find out. A website called College Factual calculates the average return on investment for various colleges and universities across the country. To do so, they make several assumptions regarding living situation, post grad life, and more. Using these figures, they calculate that it will take 20 years for the net earnings of a University of Colorado graduate to surpass those of a Colorado high school graduate.

Perhaps Buikema’s right – maybe college isn’t worth it. “My first sales job out of college, the guy I worked for said I needed to forget 95% of what college taught me. He said ‘Me and the world will show you the rest.’ I would consider a trade school, since most end up working a trade anyways.”

This highlights a growing trend: younger students are increasingly choosing trade schools over colleges. According to the National Center for Education Statistics, enrollment in trade schools has risen 28 percent from 2000-2016.

Some with baccalaureate degrees are also turning to trades rather than their traditional fields. Eric Goodman graduated from the History department at CU Boulder in 2019. I had a couple of courses with him, and  learned through social media that since his graduation, he apprenticed to a plumber’s union. “As a first-year apprentice, I’m earning $20 per hour,” he writes. “Weirdly, I’ve never been in a better position financially.”

Back home at our picnic table, while Lincoln marches around the yard playing a flute, Carey and Davis seem to agree: neither went to trade schools, yet both are professionally satisfied. Yet when asked if she felt she’d taken the right course, Davis, whose family sold the home they bought in order to pay down a portion of their student loans, hesitates. “If I were to do it again, I probably would not have taken the same path,” she admits. “Nobody has ever asked to confirm my degrees… I’m not any richer for it. I think it’s a racket…to say, ‘You must have a college education.’” Carey, whose upcoming dissertation concerns the practices of theater companies in early modern England, disagrees. “I would take the same path because my field is highly experiential,” he asserts. “I think the cost was overblown… but you can’t Good Will Hunting the stuff I was doing just by reading books.”

Still, Carey admits that if he’s unable to find employment in academia following graduation, the weight of the debt might be too much to bear. And thus looms the specter of financial ruin, which many American college graduates face. According to the Federal Reserve, the average student loan borrower pays $393 per month – a not insignificant figure. Many borrowers do fall behind: in early 2019, more than 5.4 million were in default on their loans. As Davis points out, filing for bankruptcy doesn’t reduce one’s student loan debt burden. In fact, defaulting can subject the borrower to a bevy of consequences.

Earlier this year, Colorado State Senator Steve Fenberg (D-Boulder), introduced legislation that is intended to ease part of these repayment obligations and stimulate the economy. SB20-004, known as the “Get On Your Feet Bill” and co-sponsored by Reps. Leslie Herod and Julie McCluskey, proposes to pay 24 months of student loan bills for graduates who commit to staying in Colorado. One of the main goals of the bill is to encourage entrepreneurship. Action on the bill was proposed indefinitely in June while the state government handles the COVID-19 pandemic.

So perhaps the real debate may not be “to debt or not to debt,” but whether there should be debt in the first place or going forward. The 2020 Democratic primary famously featured candidate Senator Bernie Sanders vowing not only to make public colleges tuition free, but to cancel all $1.6 trillion of Americans’ student debt. COVID-19 has also thrown light on the economic burden of loan repayments: the CARES Act, signed by President Trump in March, placed federal loans into automatic forbearance with a 0% interest rate, scheduled to expire on September 30. Meanwhile, the debt crisis and the cost of higher education entered the state’s political discourse during the Democratic U.S. Senate primary: Andrew Romanoff favored Sanders’ platform, while the eventual winner, former Gov. John Hickenlooper, favors making community college tuition free and reducing interest rates.

At the end of our conversation, I asked Davis point-blank if she thinks that the government should take action to reduce or eliminate student loan debt. She paused, asking her son to be quiet so she could think. “I think they should,” she decides. “[Debt] is saddling an entire generation who will be taking over… they should have the economic prowess to buy the things.” Before the interview ends, she tilts her chin matter-of-factly, reminding me of a sobering reality for an increasing number of young Americans:

“I’m going to be paying on this loan for the rest of my life.” 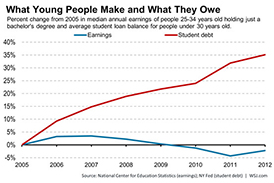 View all posts by Kate Foster →