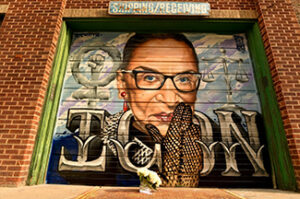 The idea that one seemingly isolated event could trigger such an avalanche of change is something we’ve seen ad nauseam throughout history. The assassination of Archduke Ferdinand. Adolf Hitler’s rejection of admittance to the Academy of Fine Arts in Vienna. Fidel Castro failing his tryout for the Washington Senators in 1947.

By now the miles of column inches dedicated to her memorialization have been printed or digitally published, and we’ve tucked away our clippings between the tattered margins of our own history books. On its own, her loss is significant enough, given her ardent commitment to women’s rights, progressive approach, and her multiple herculean bouts with cancer that never stopped her from meeting her judiciary responsibilities.

However, her death also marks what may be the greatest period of political upheaval since the Kennedy assassination.

To summarize: The GOP drew a line in the sand during the final year of the Obama administration by blocking his SCOTUS nominee Merrick Garland, who was tapped to succeed Antonin Scalia upon the latter’s death on Feb. 13, 2016.

“Given that we are in the midst of the presidential election process, we believe that the American people should seize the opportunity to weigh in on whom they trust to nominate the next person for a lifetime appointment to the Supreme Court.” These were the words written in a guest column for the Washington Post on Feb. 18, 2016 by then Senate Majority Leader Mitch McConnell (R-Ky.), and Judiciary Committee Chairman Sen. Chuck Grassley (R-Iowa).

Today, it’s clear McConnell has no plans to follow his own demands from four years ago. Because where today’s GOP is concerned, hypocrisy is a simple state of being.

Given the GOP majority foothold in the Senate, it appears unlikely the Democrats will succeed in blocking Trump’s nominee, whoever that may be. But there are other ways they can mitigate the effects of that appointment, starting with literally changing the makeup of SCOTUS. The Constitution does not mandate the number of justices on the bench. All it takes to add more justices is an act of Congress and a President’s signature — an achievable goal if a Democrat succeeds Trump. Other methods on the table include approving statehood for the District of Columbia and Puerto Rico — both seemingly Blue strongholds.

And honestly, we’re just scratching the surface of how this battle will likely take shape. While it provides for great intrigue from a political pundit’s perspective and water-cooler fodder for wonks on the Hill, what’s lost amid all of this political jockeying is perhaps the greater, more tragic loss to the American people than the justice we mourn today. Our own interests.

Throughout all of this drama in Washington, we still find ourselves embroiled in a period of extreme civil unrest, suffering bone-chilling levels of unemployment, managing the fiery destruction of unrelenting climate change, and battling a global pandemic that has taken the lives of more than 200,000 Americans in just eight months.

We, the people, continue to await any hint of leadership to unite us in confronting these ever-escalating challenges that will, in some manner, impact each and every one of us.

And that wait appears to be far from over.