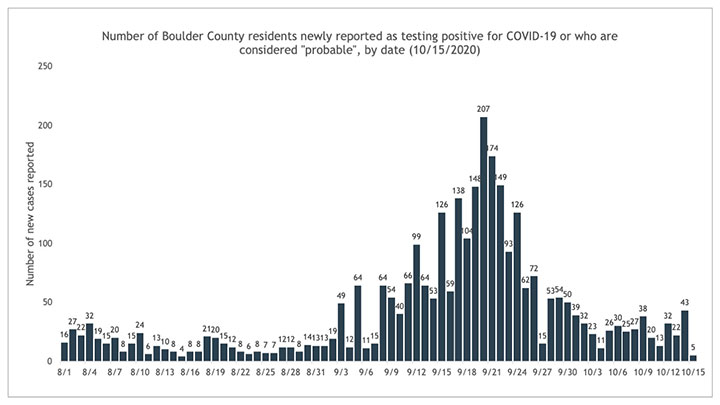 As of this writing, Boulder County sits at 4,998 cases of COVID-19, and the death toll is 84. There have been 227 hospitalizations and there are 252 disease investigations in progress. Restrictions on college students have eased some, after strict rules were put in place governing gatherings, masks, free movement, and specific house regulations. This same time frame also saw Boulder County move out of the Red Zone for two week positive rates, and toward safer, more manageable rates. • The upcoming election is in full swing and your Yellow Scene editorial team have interviewed dozens of candidates, reviewed all the measures, considered the ballots, answered the questions, and it’s all in here for you. Turn to page 14 for our full election guide. • The Boulder County Coroner identified a man found dead on the Switzerland Trail as  24-year-old Calvin Freeman, of Thornton. Foul play was not suspected in his death. He death is a reminder to be safe and prepared when traversing Colorado’s wilds. • Boulder firefighters extinguished a small grass fire at the base of Boulder Canyon, on October 15th. With the state’s largest fire in history still burning as of press time, and smoke saturating the region, we hope you’re being safe. The fire looked to be human caused, but the cause is unknown and was under investigation. • The Boulder County District Attorney’s office is bringing back the Fresh Start program in November. Fresh Start is part of a warrant forgiveness program, which gives those who’ve accrued non-violent and low level warrants an opportunity to resolve their warrant without arrest. We support second chances. Also from the DA, they’re hosting an online Restorative Justice Facilitator Training in January and are seeking “a diverse pool of applicants” for this 20-hour training focused “on the principles of restorative justice, the process from pre-conference to debrief and the experiential practice of facilitation,” a news release from the DA’s office states. • A child predator wanted in Boulder has been apprehended. A former Colorado youth football coach was arrested in Missouri on a warrant out of Boulder County for attempted sex assault on a child. The Boulder County Sheriff’s Office had issued a nationwide arrest warrant for Sacksith Vue, 52, for attempted sex assault on a child by one in a position of trust, a news release from the sheriff’s office said. He is now behind bars and, presumably, headed back to Boulder County to face charges. • A now former sergeant with the Boulder County Sheriff’s Office was arrested on charges of third-degree assault and first-degree official misconduct, according to a press release. Christopher Mecca, a 13 year veteran with the agency, was arrested on the charges alleging an assault on an in-custody inmate with a Taser who was already restrained in a restraint chair. This was in direct violation of very recent changes to official policy after a woman was similarly assaulted, resulting in a late September payout of $400,000. • Colorado house hunters have officially been nicknamed “Pac-Man” buyers by the Colorado Association of Realtors after “gobbling up” a record number of homes. The association says these buyers are “frantically maneuvering through the residential market maze – all while trying to beat the competition chasing the same real estate prize.” There is continued strong demand and dwindling supply, which has decreased the inventory of active listings down more than 54 percent — to 9,804 homes statewide.

“This weekend, Coloradans are battling danger on two fronts. Our firefighters are working hard to contain record-setting blazes, and COVID-19 cases are on the rise again. We must redouble our efforts to slow the spread of Coronavirus, minimize our time outdoors while the air quality is so poor, and remind ourselves that we have more than one reason to stay home as much as possible.”

“Eligible individuals have a unique opportunity to get their cases, and their lives, back on the right track”

“I am deeply troubled about the unnecessary force used, as it is contrary to the mission, vision, and values of what the sheriff’s office stands for. While former sergeant Mecca’s underlying motivation isn’t known, the unnecessary application of force on a person of color is especially concerning”

“Townhomes and condos are flying off the shelves, too. We are seeing more inventory in this sector of the market as people require more space for working from home and want…single-family homes. First-time buyers anxious to hop in the game are scooping them up quickly.”

“The inclusion of Eastern Boulder County is due to high fire danger caused by very low humidity levels and above normal daytime temperatures, with no significant relief in the forecast.”

1/44 – 1 death and 44 new cases in Boulder County on the day we went to press, a continuation of the saga of BOCO V Rona.

2.5 – Months of inventory of town homes and condos currently available in the area as demand soars because of the increase of work at home families.

2 – Fire restriction level in effect for unincorporated Boulder County for the foreseeable future.