Gardens of the Mind: Mental Health Improvements for Prisoners Found in the Earth | Home & Hood 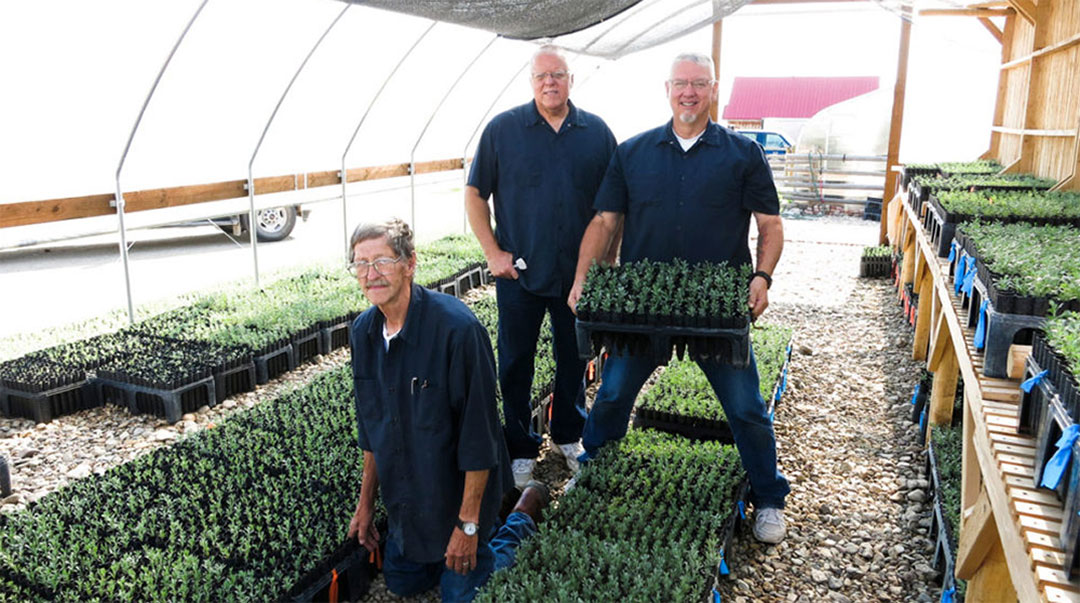 Via Institute for Applied Ecology

Here’s a not-so-fun fact, believe it or not: the leading global disability is depression. In fact, depression is the 10th leading cause of early death in global statistics. For subjects between the ages of fifteen and thirty, specifically, depression is the second leading cause of suicide. The United States has an 82 percent urbanization rate and it is also considered the most depressed country in the world, trailed closely behind by countries like France and Colombia. The United States currently has the highest prison and jail populations in this entire world, in the history of the world. The US incarceration population sits at a staggering 1,435,500 people as of the end of 2019. The suicide rate among US prisoners is four times as high as the general population’s national average.

Incarceration presents multiple negative long term psychological effects in the inmate population due to an array of environmental factors including inhumane facility conditions and general endangerment from fellow detainees. The psychological effects of long term incarceration include unhealthy dependency (loss of autonomy, anomie), paranoia, psychological distancing, social withdrawal, post traumatic stress disorder, and a sense of diminished self worth. These significant psychological drawbacks directly correlate with rising prison populations and general incarceration suicide rates. The most prominent set back of long term imprisonment is the difficulty of transitioning back into society, what we call institutionalization.

In 2003, renowned American ecologist Nalini Nadkarni launched her “Moss-in-Prison” project. The project was meant to share her love of mother nature with the men and women incarcerated in the United States prison system. The project allowed prisoners to participate in research and conservation efforts to combat the deteriorating effect of mass collection of wild-grown moss for the floral trade.

The moss-harvesting industry has a sizable footprint valued at $260 million annually. The daily life of a typical detainee is pretty ideal for moss related research due to the fact that they have the time available to observe moss over an extensive amount of time in order to aggregate fresh research. While we’re against the use of un- or low paid prison labor, it being an extension of the slavery industrial complex reformulated under the 13th amendment, we do support people that are incarcerated having voluntary, positive use of time to engage in projects that can help alleviate their own stress and the mundanity of being incarcerated.

The inmates involved in the project were educated in moss species identification and eventually built a greenhouse with recycled materials. After an eighteen-week process the facilitators began to see the positive effects produced in the prisoners. Inmates began to display improved social skills and interactions, a more uplifted or hopeful mindset, with accompanying requests for higher education. Nadkarni wishes to extend her project into the deepest and darkest portion of the prison system, solitary confinement.

An Oregon maximum security prison showed a set number of solitary confinement inmates nature videos in order to explore the effects. Each selected inmate could view the video in the allotted exercise room for one hour a day, three days a week. After an entire 365 days the facilitators sat down with the inmates to gauge the effects. Inmates stated they felt a lower amount of stress, lowered irritability, and some even stated they had the ability to reach a calm state. The video also lowered the amount of violent infractions the inmates typically receive by twenty six percent. The healing benefits of nature to individuals in the state of rehabilitation are quite substantial, but not everyone gets that experience.

The “incarceration experience” is quite a bit more common than most would think. Yellow Scene Magazine’s very own Editor in Chief, De La Vaca, looked back on his personal incarceration encounter. “My personal experience was terrifying. I was clearly innocent and beat the case, one of the lucky few, but it really changes your understanding of life and your relationship with freedom.” De La continued, “There’s something absolutely unnerving about being locked in a 5 by 7 cell with a guy accused of 100 + counts of attempted murder, who spends his evenings kicking the bolted down chair to our desk because he wants to be able to split people’s skulls with his shins. I was facing 25 to life without the possibility of parole and I had to familiarize myself with the possibility of never being free.”

During his time served, he recalls that detainees had essentially no control over their food, their living space, or their daily activities. “The only space outside of our cells that we saw was the homeroom which is the main room of the tank where you eat and have limited access to board games and snacks except for once, after somebody whistled at a female guard, when we were all taken to an enclosed cement gym area that was generally off limits but which we were forced into, naked, in the middle of the night, for the female guards to laugh at us as payback for the whistle. It was a monumental lesson in the deputy abuse of prisoners, and one that everyone in our tank knew never to risk again.”

De La Vaca described his living conditions. “You sleep in your cell. When you go to jail, everything is taken from you and you’re given a box that they call your house. That’s your house because it has your toiletries and everything that you’re allowed to have. You’re given a mattress when you get to your tank and a sheet, which doesn’t have fitted edges, so you have to learn to tie it around the back of your mattress, creating a very uncomfortable wonky mattress, otherwise the sheet would move and your end up with your bare face in a mattress that has been used by hundreds, even thousands of other prisoners before you. Nobody is under any illusions that these things are clean or sanitary.”

The psychological effects of incarceration still follow De La Vaca to this day. “Psychological effects of jail include lack of autonomy, lack of trust, increased danger and sense of worry in regard to the people around you, given the amount of fights that occurred and the willingness to inflict violence should a situation arise.” When asked if he still experiences PTSD symptoms from his time incarcerated, De La Vaca explained with a heavy heart, “I still experience PTSD symptoms. That doesn’t ever really leave. When somebody can, and tells you physically, that they can murder you, that’s never going to leave you.”

About a decade later De La Vaca graduated from UC Davis and was hired to work with a juvenile facility program for adolescent rehabilitation. He was able to design a garden, which was built by the facility staff and then filled with plants by his group of young people. “I was part of the supervising group from our organization and we talked about alternatives to violence, community gardening, the use of gardens for self-control and developing patience, and other things. It was an amazing undertaking.” When asked how the gardening experience made him feel De La Vaca’s tone warmed as he described his experience, “It’s amazing. Putting your hands in dirt is the best. Growing things is awesome. I was a Landscape Architect turned Community and Regional Development graduate and being able to use my love of the earth to reach kids was amazing. These were savvy kids, too. They were just knuckleheads from knucklehead neighborhoods, just like me, who needed direction. Playing with bugs, eating veggies we grew ourselves, and developing relationships was so amazing.”

“Speaking for myself,” De La Vaca says of his own time incarcerated, “a couple of bags of dirt and some growing plants would’ve been such a great way to remember that life goes on, to maintain a grasp on autonomy and soul, and to look forward to life outside of the system. When I was released, just a few months later, a guy committed suicide. He was in my same cell, in the same bed I had been sleeping in, and he killed himself. I think about that sometimes. What did he need to survive that moment, that incarceration? I can’t answer that, but I know growing life is a great way to remember life is important, my life is important.”

So then, what plants are best to possibly throw into the mix?

Plants come in an assortment of shapes, sizes, and with a vast amount of differing health benefits. There is endless amounts of research that support the fact that immersing oneself in natural settings can reduce anxiety, curb depression, improve recollection, and benefit cognition. Caring for plants also brings the caretaker a sense of purpose and accomplishment, all the while raising self-esteem. Not only that but indoor plants have been a variable in increased productivity in indoor work environments and aiding in the speed and quality of recovery for hospitalized patients. There really are no drawbacks to making plants a part of one’s day to day life.

The biophilia hypothesis suggests that we as human beings crave connections with nature and other forms of life. As natural beings we have a tendency to gravitate towards other living beings that require our love, adoration, and stewardship. We emerged and evolved with mother nature, and it wasn’t until very recent centuries have we flocked to urbanized cities. To be fair, a review of the early Enclosure Acts point to a more nefarious reason for the development of city living, the need for concentrated labor as the Industrial Revolution took hold. City living means less nature. “Green isolation” is directly correlated with the dire consequences to our mental health and physical well-beings. 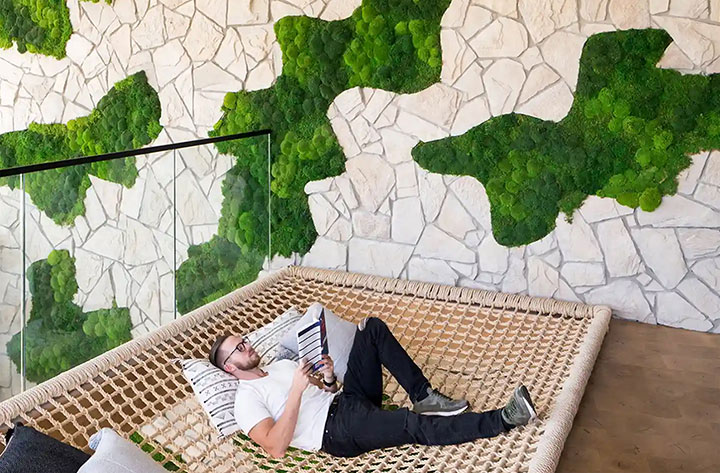 Though we are primarily concerned with plant effects on the incarcerated, and even though we urge you to channel your inner Jane and Tarzan, we want you to have plants at home as well. Simply surrounding oneself with basic house plants or perhaps getting your hands dirty in a personal garden will get the positive affects job done.

The University of Technology in Sydney, Australia, found that the presence of plants (no matter the variation) can:

If you are looking into starting your own indoor garden there are a few essential plants you’ll need in your personal indoor jungle. Aloe vera is an essentially mainstream succulent with a long list of health benefits. The miracle plant heals burns, clears acne, and helps heal mild cuts and bruises. You can also ingest aloe to improve your digestive and oral health. The best part of this useful houseplant is the fact that it is essentially the easiest house plant to care for. Place it in a sunny area in your home and water it every few weeks.

There are also a vast variety of indoor plants that provide medical benefits. For example, the pothos plant is one of the easiest plants to grow and it alleviates eye irritation after a long day of staring at screens. Lavender is another useful plant. The sweet smelling aroma provides stress reducing benefits. Lavender oil acts as a healing balm for cuts and burns, can alleviate headaches, and improve sleep.

The benefits of mother nature’s greatest gift, plants, are endless and everyone on this little planet deserves a connection with our roots. Plants are the key to our reconnection to the core of the human spirit. They are essential for not only maintaining physical and mental health but to help rehabilitate people in need as well. More plants for prisons, for prisoners, and for all people…including you.