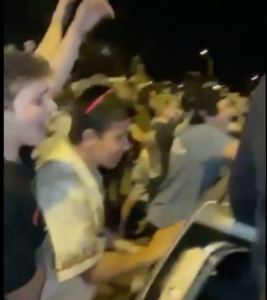 The Daily Camera has it wrong, this may have begun as a party, but this turned into a RIOT.

I want to know, how many people will be sent to the hospital? How many people will be sick? Will all the restaurants have to shut down again? How could there be ZERO arrests last night? How can CU still be sending people to in-person learning this week? The last two times you brought students back on campus the county spiked.  (via~ KGNU).

The most recent episode saw a spike of 1,800 positive cases and everyone had to shut down. From frolicking in the creek to frat parties, CU has chosen to be an epicenter. You told us, “This time will be different”, but it isn’t.

You knew better, University of Colorado Boulder, you knew better. What will this round bring us? As everyone is preparing to open, we have a Super Spreader RIOT at CU again. Totaled cars in the street? Glass everywhere? Assaulting First Responders? This is disgusting and not acceptable. The epitome of privilege.

(whose seen way too many CU Parties and couch burnings, but now it’s not funny because it’s a Pandemic.)

We condemn the conduct on University Hill on Saturday. Any student found responsible for acts of violence toward law enforcement or first responders will be removed from CU Boulder and not readmitted.

Yes, not being able to party in college sucks. But so does having your kid trying to learn remotely. So does being laid off. So does watching loved ones die in isolation. The "right" to party is frankly pretty low on the list of sacrifices people have made during this pandemic https://t.co/kJ2QXabl0z

Images of the damage to vehicles, not just the car that got flipped, during last nights University Hill riot in #Boulder (pics via @photojmatthew) pic.twitter.com/8Mutp5fhN7

And the final result pic.twitter.com/50esr20Hfw

College students in Boulder had a party with several hundred people in the middle of a pandemic. Boulder PD showed up to disperse the crowd and threatened to arrest people. This is what remains of a car people flipped over and destroyed #9News pic.twitter.com/221GjNNijP

Boulder Police Tweet at 8 pm about the CU Riot. It started at 3 pm.

CU Alert: Boulder Police is responding to a large party in the area of 10th & Pennsylvania. People in the area could be subject to arrest and CU sanctions.

Misprint in the Subject Line

Can someone explain this. Is CU Boulder telling me to fight cops. pic.twitter.com/T2i834eF5i

District Attorney Michael Dougherty released the following statement regarding the incident in the Hill area:

“Our community was put at risk last night by the individuals involved in the incident in the Hill area. Their callous disregard for our community’s safety and

OTHER SUPER SPREADERS AT CU: