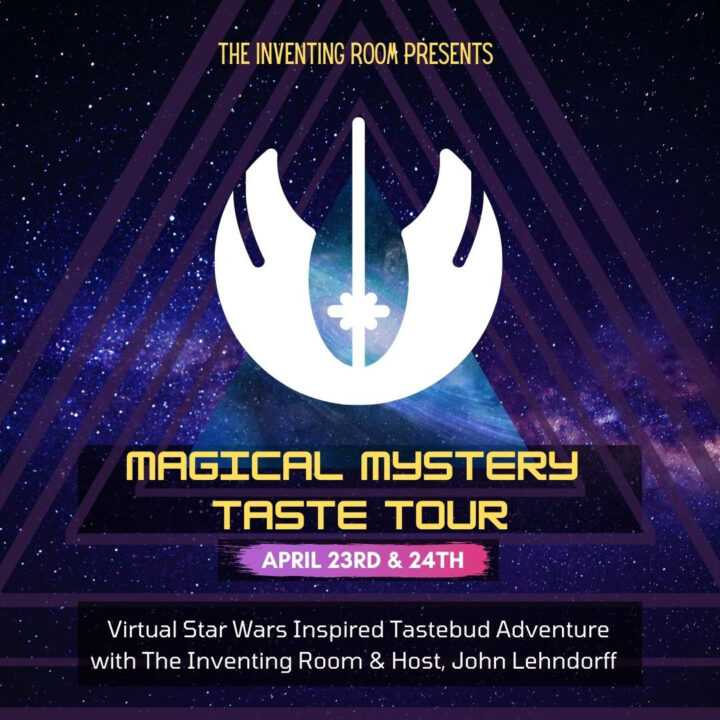 Join us in a flavor galaxy far, far away as the Inventing Room takes you on a rare Star Wars-inspired Magical Mystery Taste Tour.  A key card from The Inventing Room gains you entry to the virtual blind tasting of artisan candies and treats in tune with both the light and dark sides of The Force.

May the force be with you as only a very limited number of Jedi and Mandalorians can participate in this virtual tasting with Chef Ian, Stacey Kleinman, and your host, John Lehndorff. Costumes are welcome as we gather on Zoom to taste our way through seven amazing food experiences including one that you would think came from far flung galaxies and that would shock even a Wookie.

If you have enjoyed our past virtual “flavor-tripping” finales, we have a new Jedi mind trick for you involving the accurately named “buzz buttons.”

During the tasting, Chef Ian and John Lehndorff will talk about how taste buds work and the science behind crafting The Inventing Room’s astounding artisan sweets. We will also test your knowledge of food and drink in the Star Wars universe with a trivia quiz. During this interactive tasting we want to see your faces as you sample the mystery treats and welcome your comments and questions.

The Star Wars-inspired Magical Mystery Taste Tour will be held at 7 p.m. on Friday, April 23, and Saturday, April 24 on Zoom.

*Each ticket includes one box for one participant*

You will receive a box of numbered treats shipped to your home the week of April 19th, as well as an emailed Zoom invite and instructions prior to the tastings.

John Lehndorff has been writing and talking about food in Colorado since the 1980s. He is the former award-winning Food Editor of the Daily Camera and Dining Critic for the Rocky Mountain News. John is the former chief judge for the National Pie Championships and his writing has appeared in the Washington Post. He hosts a monthly bean-to-bar artisan chocolate tastings on Zoom. Visit:  johnlehndorff.wordpress.com