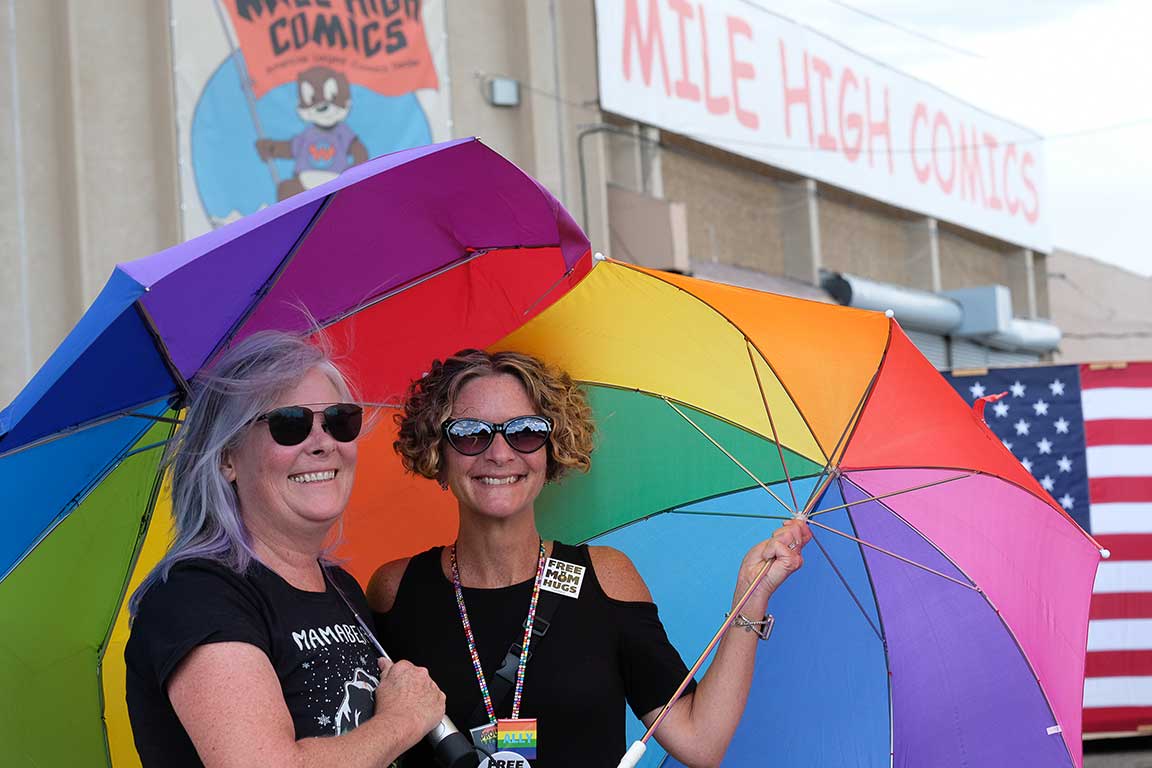 Heather Spillman (pictured right) was one of the first volunteers to join Parasol Patrol in 2019. Photo courtesy of Dave Russell.

Ripley and Bazan planned to attend an all-ages drag show at Mile High Comics in 2019. After seeing people online planning to protest the event, Bazan walked attendees from their car to inside the store, shielding them from the hateful protestors. From there, Parasol Patrol was born. Now equipped with rainbow parasols, sticker-covered headphones, and a large national volunteer base, Parasol Patrol is invited to events all over to shield children from hateful protests.

“The kids are going to have to walk past that, to see the hate, they’re going to have to see the signs, the angry faces, the threats, the yuck, that hatred coming at them,” Ripley said. “We want the last thing they see before going into their venue, whether that’s a library for drag queen storytime or a bookstore or a show or anything, the last thing they see is not these hateful people out there intending them harm, if not physically certainly emotionally.”

Responding to Parasol Patrol’s presence, the protestors increased their numbers in what can be seen as an attempt to intimidate or overwhelm. Parasol Patrol started with a handful of volunteers until Ripley took to Facebook, reaching out to groups like Free Mom Hugs, an LGBTQIA+ non-profit.

“Those protesters came around the corner, there were at least 40, and saw this wall,” Ripley said. “We had so many people. We had a wall of umbrellas going from where the parking lot was to the front door. They were surprised.”

Parasol Patrol does not engage with protestors.

“Our stance with protestors is the same wherever we go,” Bazan said. “We do not engage. We are not there to have any kind of interaction. We just do our best to silently keep them at bay. We are not security at these events. We don’t claim to be. I’m not there to take somebody down. We do make a point to say we are not counter-protestors. We do not carry signs, we don’t yell back. That’s just not how we do things.”

“There’s been some pretty nasty people right in my face, yelling terrible things,” said Heather Spillman, who began volunteering after seeing a call to action in Free Mom Hugs. “They don’t hold back. They yell the worst things. They call the parents horrible names. They tell the kids they’re going to see all this terrible stuff inside. So that’s why we’re constantly engaging the kids in other conversations.”

Ripley and Bazan encourage volunteers to take self-care breaks if the hate speech becomes too overwhelming. If volunteers engage with protestors, it shows that they are not volunteering in the best interest of the children. For Parasol Patrol, it’s important for the adults not to add to the chaos. Volunteers should be focusing on keeping the mood light for the children.

Bazan was a close combat instructor in the Marine Corps.

“I’ve never been able to stand by and watch something happen,” Bazan said. “I’ve never been able to see something going on that wasn’t right and just walk by and turn my head. I’ve always been that guy that it’s gotten me in trouble more times than it hasn’t. The older I’ve gotten, the last few years especially, I just have no tolerance for hate of any kind. I’m too old. I’m too tired. It takes too much energy to hate people… This seemed like the perfect storm of events when stuff needed to be done and nobody else was going to do it, so I did it.”

“Despite what people say, there aren’t windowless vans stealing little white kids from the suburbs,” Ripley said. “The bulk of youth that are being trafficked are teenagers that either run away or are kicked out or a combination of the two for being queer, most of the time. So they turn to survival sex work or they get seduced into it by an unscrupulous pimp or madame or whomever. They do this to survive and get by. We want them to know that if they need help, there are safe places they can go.” 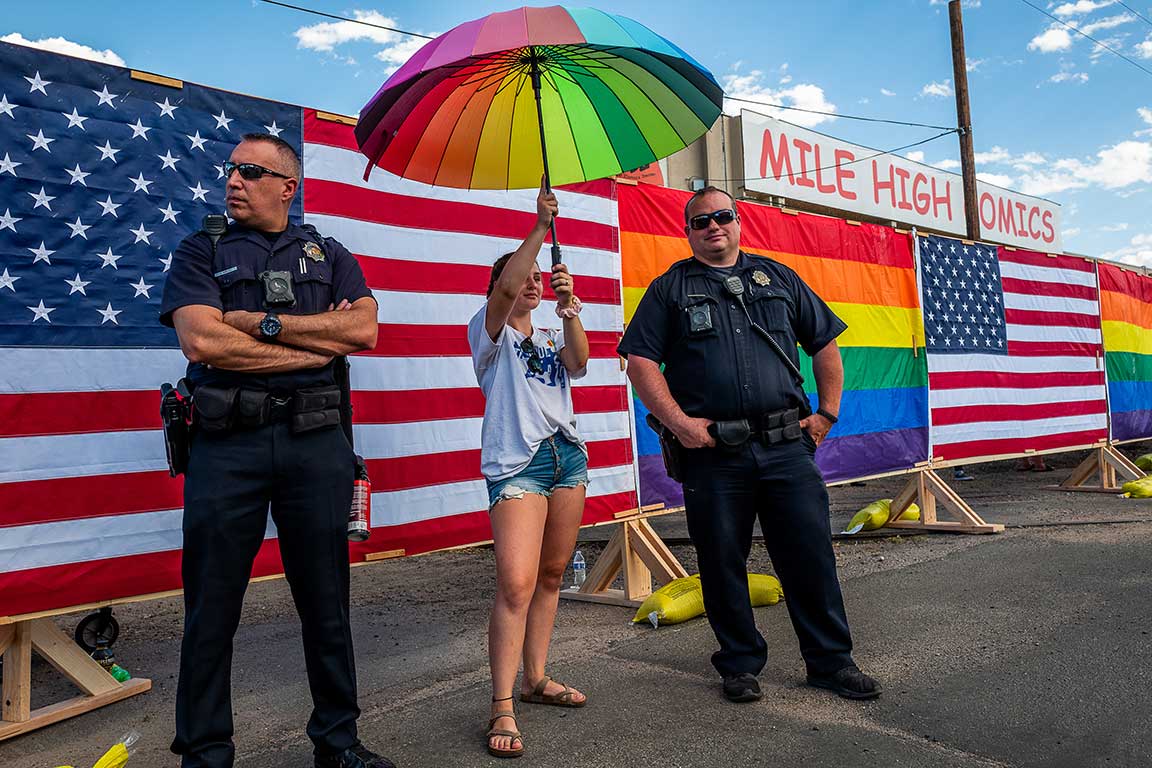 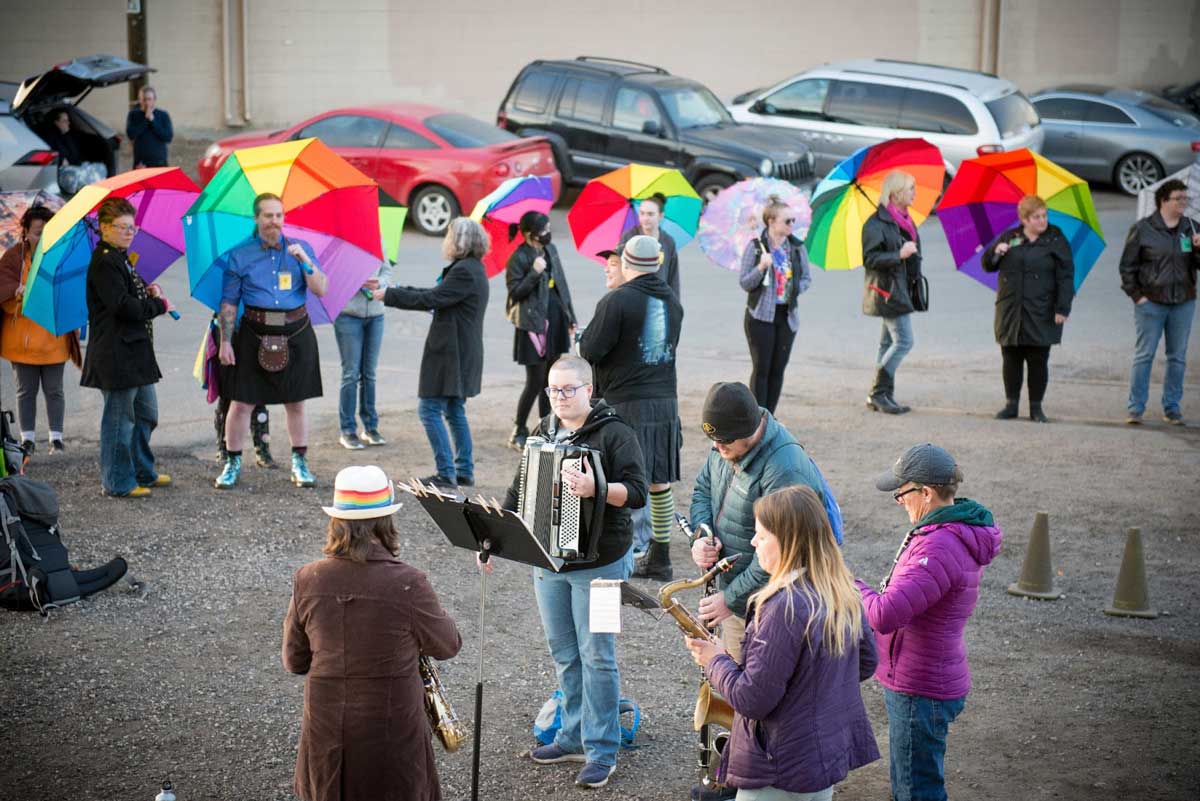 By establishing a strong and supportive presence at events, Ripley and Bazan hope that children will come to them if they need a safe space.

Acceptance from LGBTQIA+ groups and drag queens offer positive support for young people, but support coming from the broader community is significant to struggling LGBTQIA+ youth, especially when they are facing hatred at home or in the form of protestors.

“To see the whole community applauding, seeing that the community supports them, I think is just as much to lift their spirits and to show them they are accepted and loved,” Ripley said.“There’s always going to be those jerks out there. But there’s going to be more of us loving them. If they see us at Mile High Comics shielding kids during a show, that’s a safe place that they could go in and talk to somebody. There’s rainbow flags, trans flags all over that place. Of course it’s great when fabulous queens support them. But when it’s people they don’t expect. It helps. It shows them that they’re supported and there are people they can turn to, not in spite of who they are but because of who they are.”

“Our mission remains the same, we will always protect kids at any cost against anyone, whoever is protesting against them or would do them harm,” Bazan said.

With more children becoming activists, Parasol Patrol saw a need for protection at BIPOC events and demonstrations. “The fact that 12-year-olds have to go out there and do what we adults won’t is pretty messed up,” Ripley said. “We want them to have a safe space.” 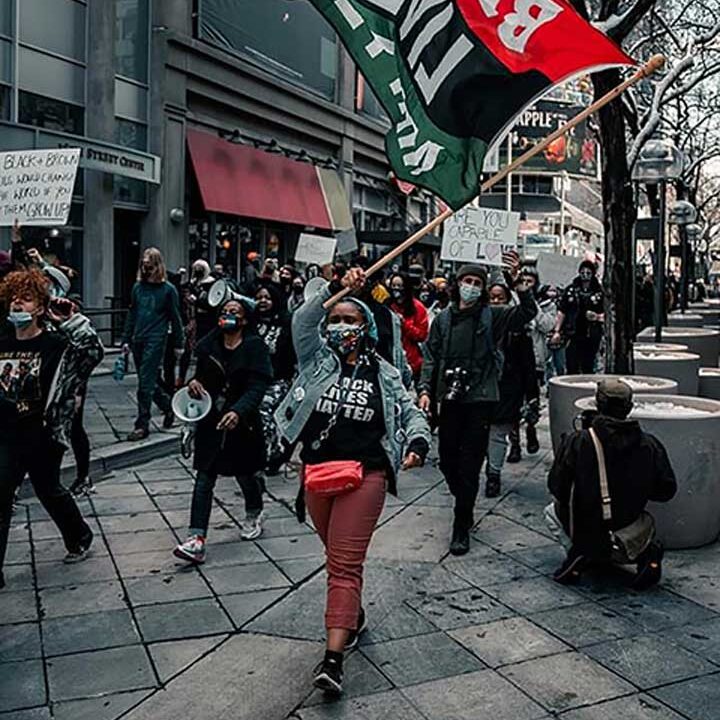 Ashira Campbell waves a Black Lives Matter flag during a protest. She is a 17-year-old community organizer and activist. Her presence brings out a younger crowd. Photo credit: Colin Lloyd. 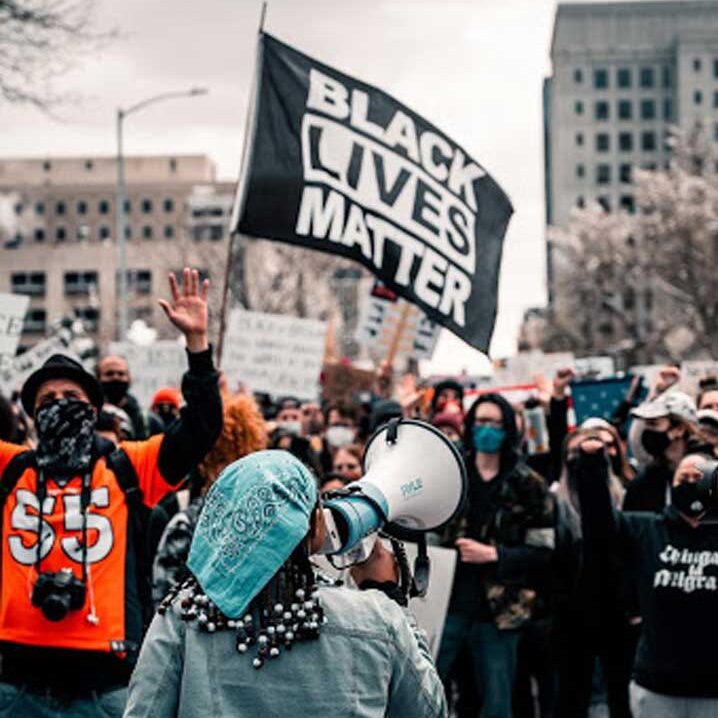 Ashira Campbell asked Parasol Patrol to attend a youth-led protest for Daunte Wright and a sit-in for Ma’Khia Bryant. Both Bryant, 16, and Wright, 20, were Black youth killed by police. “We are individuals in a community that need to come together and stop the root of the killings and brutality, which is hate,” said community organizer and activist, Ashira Campbell.

Campbell saw Parasol Patrol’s presence at other protests and demonstrations. She remembered their bright rainbow umbrellas. “I’ve seen them previously at protests, and I see the work that they do with blocking traffic, which is a really good thing,” Campbell said. “We don’t want any accidents to happen.”

“We’re very thankful for all their support and everything they’ve provided for us,” Ashira Campbell said. “I totally recommend them, five stars.”

Organizers and activists often worry about counter-protestors as well as police, given the history of counter-protestor violence. They are fighting white supremacy and LGBTQIA+-phobia, which can come from anywhere.

“The people that honestly aren’t for us is basically what we’ve been saying the whole time is white supremacy, in all forms—if that’s with a badge, if that’s your next door neighbor, whatever the case is,” Ashira Campbell said. “We’ve already experienced what police have done to us over the summer. And what they’re doing currently. It definitely takes you out of your comfort zone, especially if you’re new.”

Ashira recalls, “when it was my second day protesting we were asking why are there so many cops here, and why are they in riot gear? Why do they have pepper balls and tear gas? We’re not at war. We’re not at a battlefield. We kept it moving. It’s normal to have those feelings of uncertainty.” 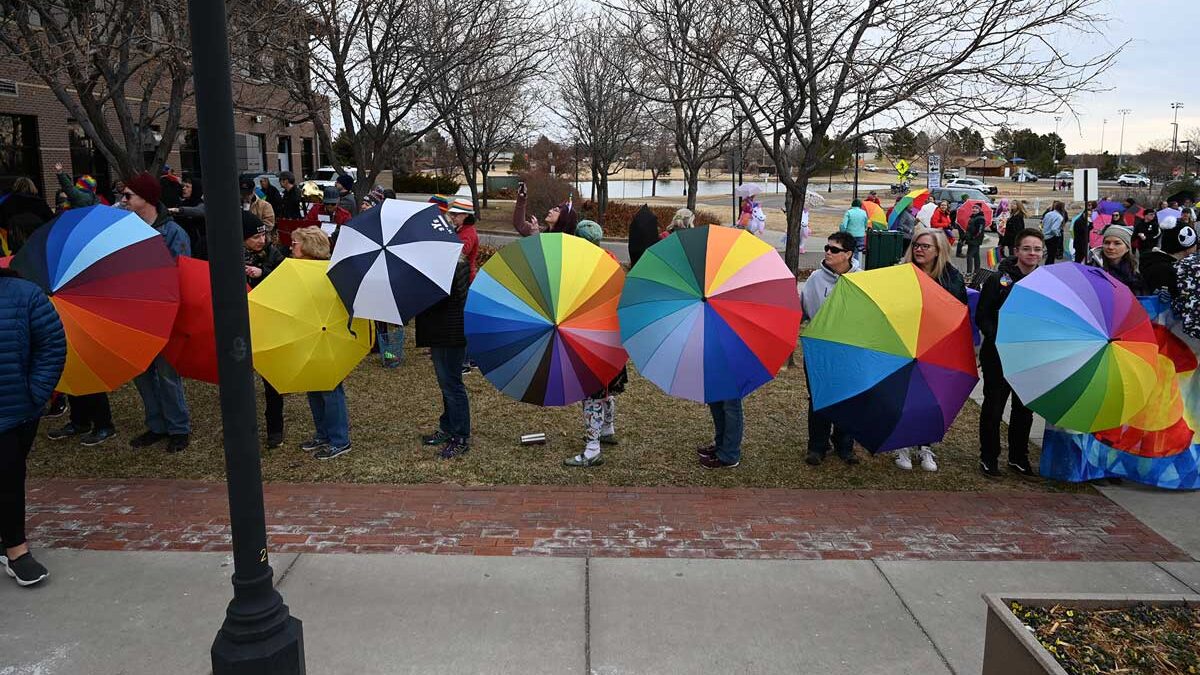 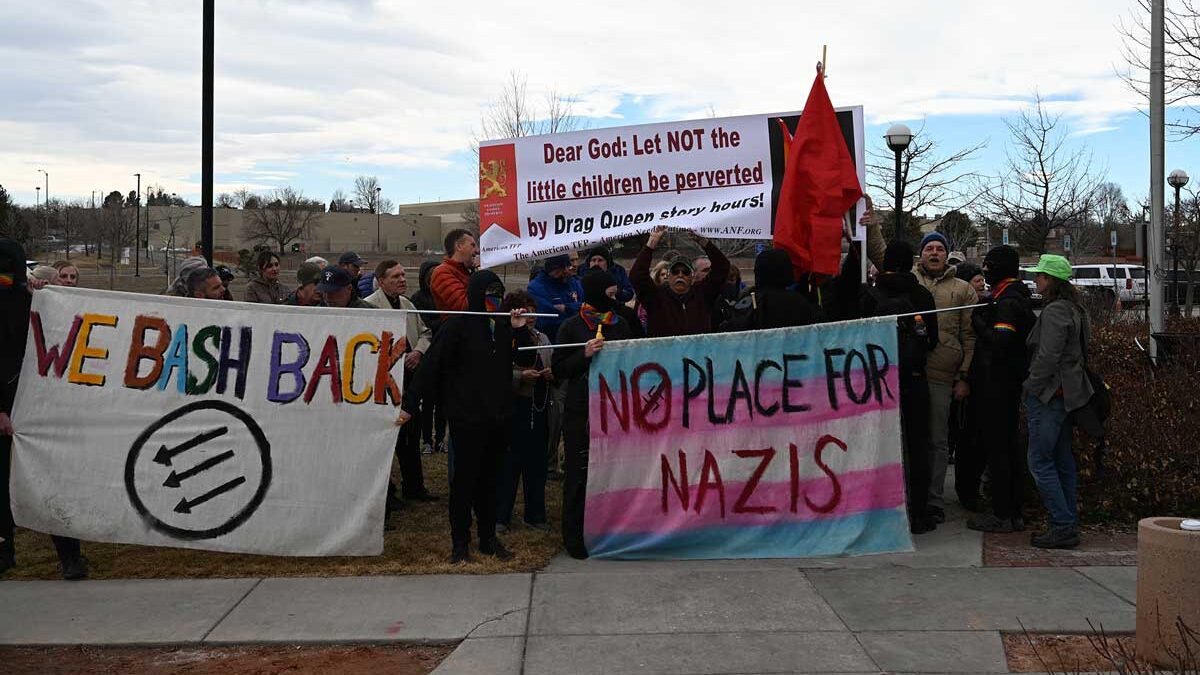 Her mother is also grateful for Parasol Patrol’s presence at her daughter’s events.

“They are pillars in the community, and we really appreciate them,” Porshai Campbell said. “It’s assuring to have that protection from counter protesters. We don’t run into many of them, but you always get them here and there. Just knowing that [the Parasol Patrol is] there to protect the children, since Ashira is 17, and now it draws the younger crowd out. It provides a peace of mind.”

Parasol Patrol began to work outside of Colorado when they were invited to shield children at an event in North Carolina, from the Westboro Church, a hyper-Calvinist hate group. With eight days notice, Parasol Patrol enlisted 700 volunteers for the event.

Armed with loud speakers and blow horns, the Westboro church perverted pop songs into hate speech anthems. They held graphic signs and yelled hate speech into their megaphones. “We’re not afraid physically of Westboro coming after us,” Ripley said. “They don’t bring riot shields and everything. We are able to literally turn our backs on them and spin our umbrellas and laugh them off.”

“We were all weeping,” Ripley said. “It was one of those moments.”

Bazan and Ripley have been all over the country guiding people in places as far as California, Hawaii and Idaho in starting their own chapter of Parasol Patrol.

Ripley grew up in Oklahoma and Bazan in rural California. They’ve noticed that people in Colorado are sometimes ignorant of the hate presence in the state compared to people in Southern areas. They’ve had much bigger volunteer turnouts in other states.

“We gotta get to work,” Ripley said. “I think in Colorado people are a little more complacent. They don’t think there’s a Proud Boy or QAnon problem. At least in the South they know.” 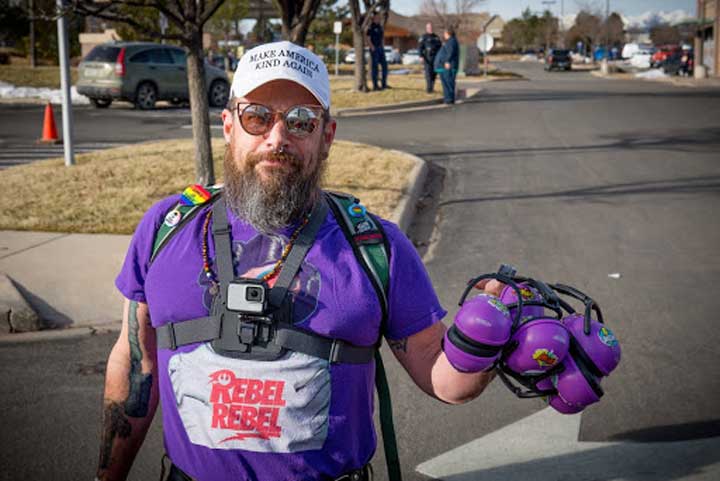 Bazan came up with the idea to bring parasols and headphones to literally block out hate speech for children. Photo courtesy of Christopher Cleary. 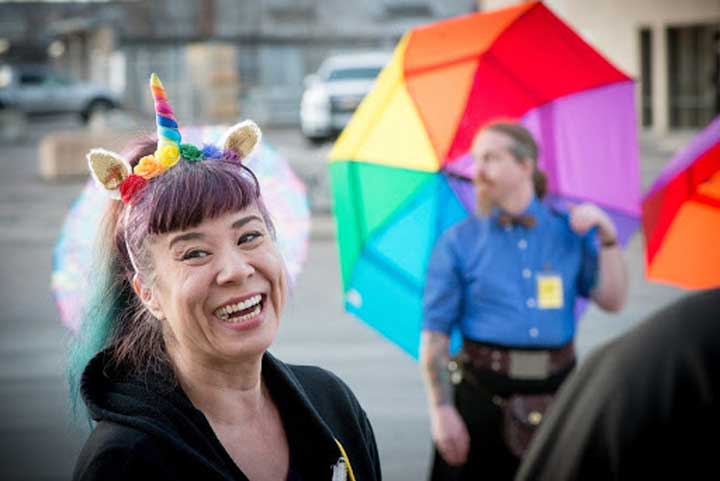 Ripley tells Parasol Patrol volunteers that they can call her if they are feeling down about anything they’ve heard at an event. Protestors often say disturbing things that can affect the mental health of volunteers. Photo courtesy of Christopher Cleary. 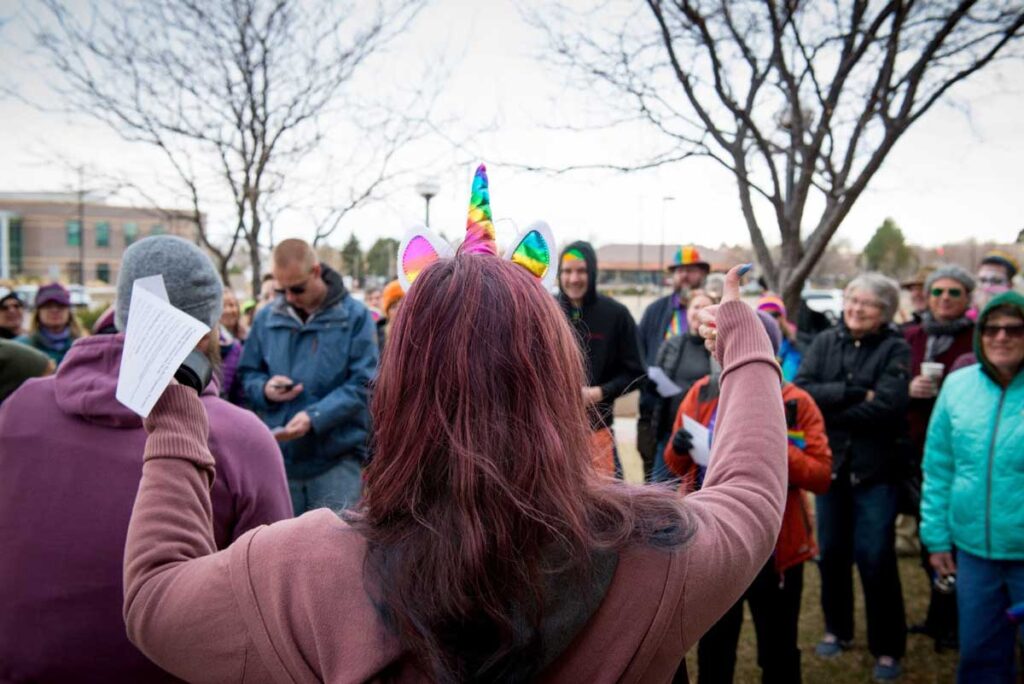 Ripley is one of the founders of Parasol Patrol. Volunteer numbers grew as Ripley posted calls to action on social media. Photo courtesy of Christopher Cleary. 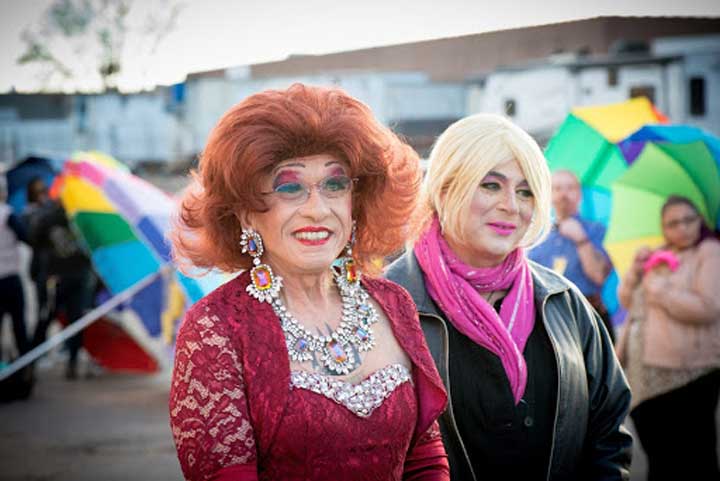 Bazan and Ripley are in the process of creating a class on knowing your local hate group. For their volunteers, it’s important that they know the possibilities that can happen when members of hate groups track you down personally.

Protestors found Spillman on Facebook and posted wild accusations about her through their social media accounts. “It didn’t stop me from showing up,” Spillman said.

Spillman noticed that hate groups aren’t the only people protesting.

Although Parasol Patrol sees hatred coming from many angles, they fervently hold onto the sentiment that love wins, using the hashtag often. “In the end, I know especially after this year, we’ve been through the ringer, so it’s really hard to be that idealistic and say love wins,” Ripley said.

Parasol Patrol is always looking for volunteers and donations. Ripley and Bazan hope for at least one of them to get paid for their work with the organization, which they are now volunteering their time to run.

“I would absolutely love to not have to worry about a kid walking into a drag storytime and getting screamed at that they’re going to Hell,” Bazan said. “I would love for that not to be a thing. But those are not the times we are living in. We have turned a corner after these last four years, but we have a long way to go.” 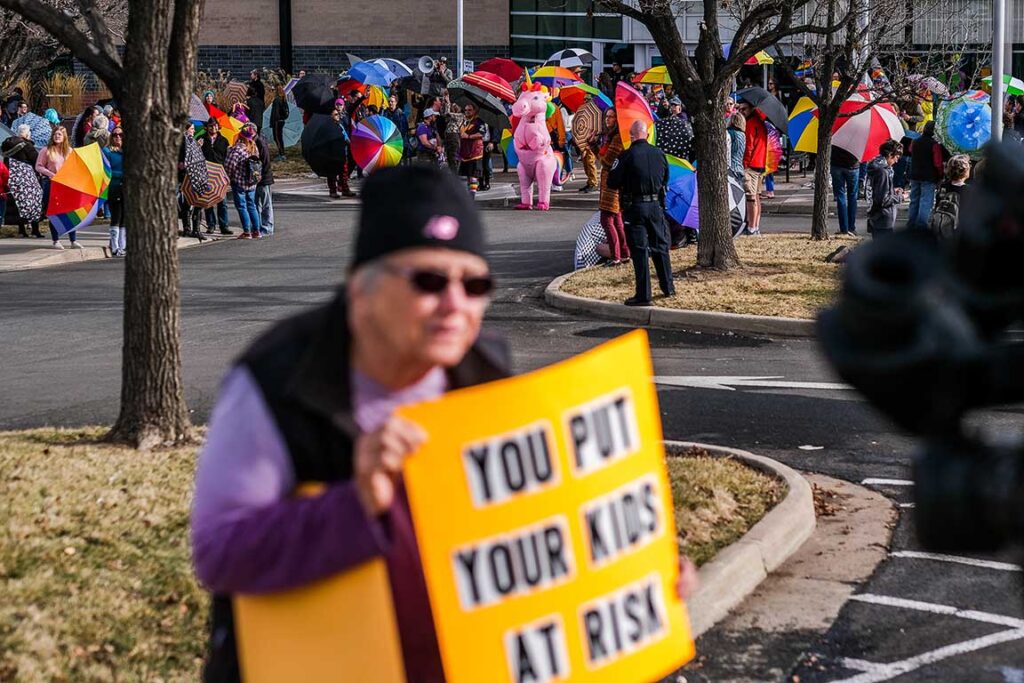 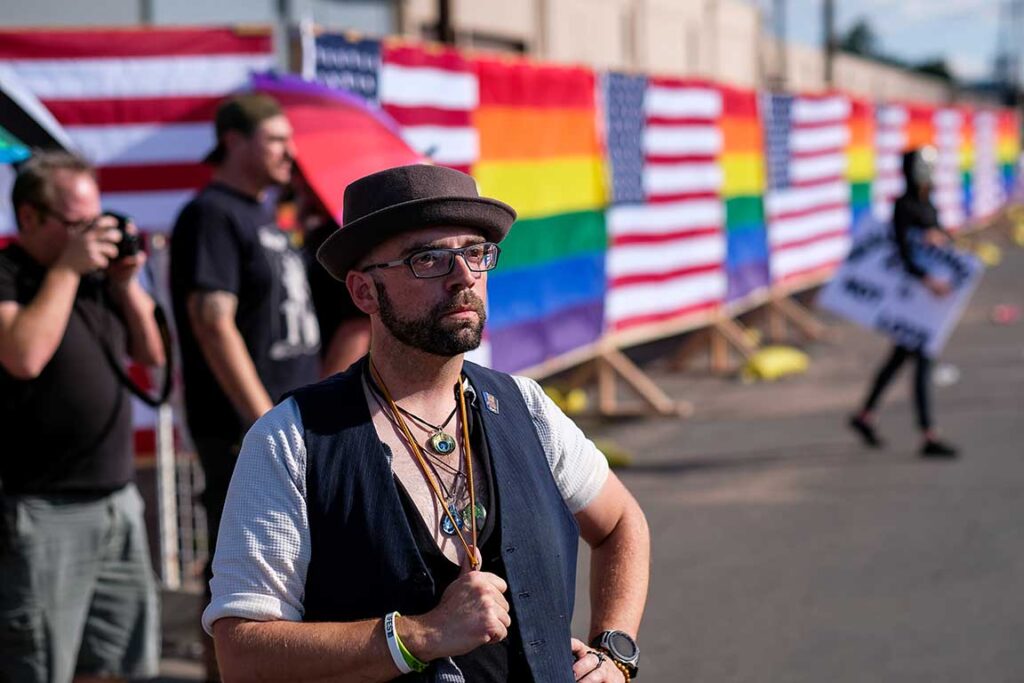 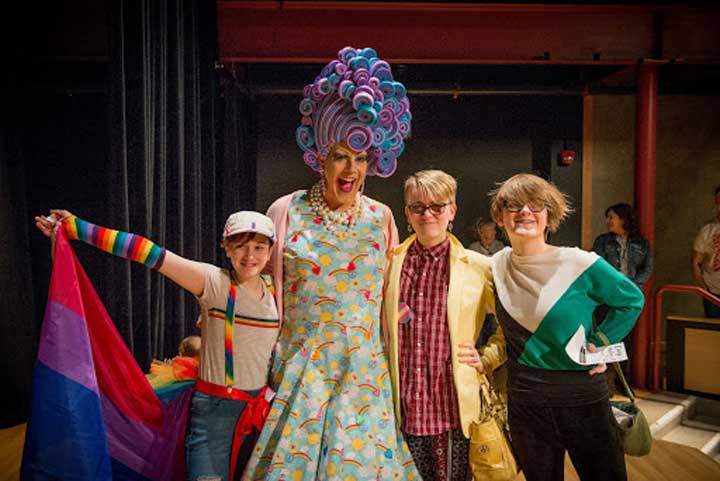