A Sheep, A Duck, and A Rooster Climb Into a Balloon | Summer Sports 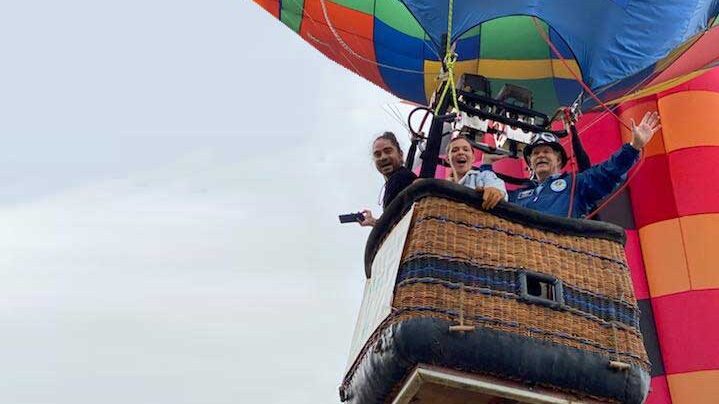 Sport. Or as a plebeian may say, sports. (We can’t all be Mitt Romney being a robotic multi-millionaire on stage, but I digress…) On the topic of sports, Americans tend to think of football, baseball, or hockey. Those of us with more adventurous roots might talk about swimming or polo or wrestling, even rugby. At the extreme opposite end of sport you might find those engaged in competitive darts or high stakes poker; let’s hope no one loses an eye.

Here’s one that doesn’t come to mind for most people, though it’s on numerous bucket lists and is almost universally unrecognized as an extreme sport: hot air ballooning.

Totally True and Very Weird Background: On Farm Animals and The Skies Above

On September 19, 1783, Pilatre De Rozier, a scientist and clear lunatic, launched the first hot air balloon. It was named ‘Aerostat Reveillon’, but we have no idea what that means (Google translate was no help). The passengers were a sheep, a duck, and a rooster… and the balloon stayed in the air for a grand total of 15 minutes before crashing back to the ground. Folklore in the ballooning community, as was told to me by my good buddy Tom over at Fair Winds Hot Air Balloon Rides in Boulder, Colorado, is that as that hot air balloon crashed to Earth with a sheep, a duck, and a rooster in it, black smoke belching out the sides, and the people who saw the crash thought it was a demon or dragon or some other evil entity. The animals were slaughtered. The balloon destroyed.

Keep in mind that ballooning back then hadn’t reached the elegance of a propane tank firing up hot air into what we now call an envelope, or the balloon, but a gigantic paper balloon filled up and fueled by a bonfire of sorts, so that when it crashed at the Earth it was full of flame and fire and ash and darkened skies. Not to beat it on the head but 1783 wasn’t known for its world-changing understanding of the world. This was the year, after all, that the Spanish and Swedish recognized the fledgling U.S. independence and hostilities ceased in the American Revolution. This was the year that Catherine II took the Crimea. This is also the year that, on August 27, the first hydrogen balloon flight (unmanned) was launched; it reached an altitude of 900m.

Lest I veer to far astray, let’s get back to our sheep, duck, and rooster… Following that noble attempt and their decimation upon crash landing, the first manned attempt came about two months later, on November 21st, 1783, when a balloon made by two French brothers, Joseph and Etienne Montgolfier, launched from the centre of Paris and flew for a period of 20 minutes.

Hot air ballooning is NOT for the champagne averse. 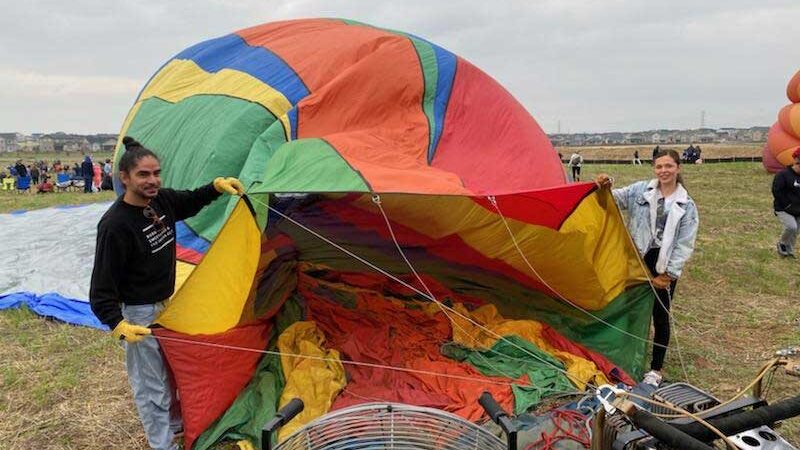 The Birth of Hot Air Ballooning!

It is said that, understanding the implications of the slaughter of all of the animals aboard that first balloon, believe it if you will, the brother’s lowered down a bottle of champagne to alert the villagers to their friendly disposition and to the fact that they were neither devils nor demons nor dragons. It is from this that the tradition of christening flights with champagne was born. It is from this that the ceremony of aeronauts was born, congratulating first time hot air balloon riders with a champagne soak, or a glass of champagne if you’re me, for achieving what so few humans do: earthly transcendence, becoming an aeronaut.

When I first took this assignment, I was excited but I also didn’t know where to begin. Luckily, our publisher knows everything and everyone. I was pointed in the direction of Fair Winds Hot Air Balloon Rides, based here in Boulder County. They launch in the lot adjacent to Lake Erie, just east of 287 near the Arapaho intersection. Jeff Meeker is the president of Fair Winds Incorporated, which has been accredited by the Better Business Bureau since 1998 with an A+ rating, in business for 28 years. Their website claims that they’re a global leader in hot air ballooning. That might be a self congratulatory designation, but nearly three decades in the industry means they’ve earned their place.

Vitae Sports and Entertainment has an article on their website titled, “Ballooning is the Most Spontaneous Sport”. Seems legit. Speaking of spontaneous, Thomas Winger, of Fair Winds, is the guy I spent the majority of my time with at the first launch of the season for Fair Winds, which took place on May 1st. Wrap your head around this lunacy: Tom got into ballooning by answering a Craigslist ad.

Tom told me he answered an “ad for a guy who’s a private flyer who’s retired. He was a sportsman and he was a world champion; He had a couple records for long-distance flights. So I learn how to fly for two years and crewed for him and then I’ve been with Fair Winds for 5 or 6 years now, as one of lead crew members for Mariah,” which is one of the massive balloons Fair Winds operates.

I couldn’t imagine answering a Craigslist ad to possibly risk my life as an aeronaut, but Tom is that kind of guy. 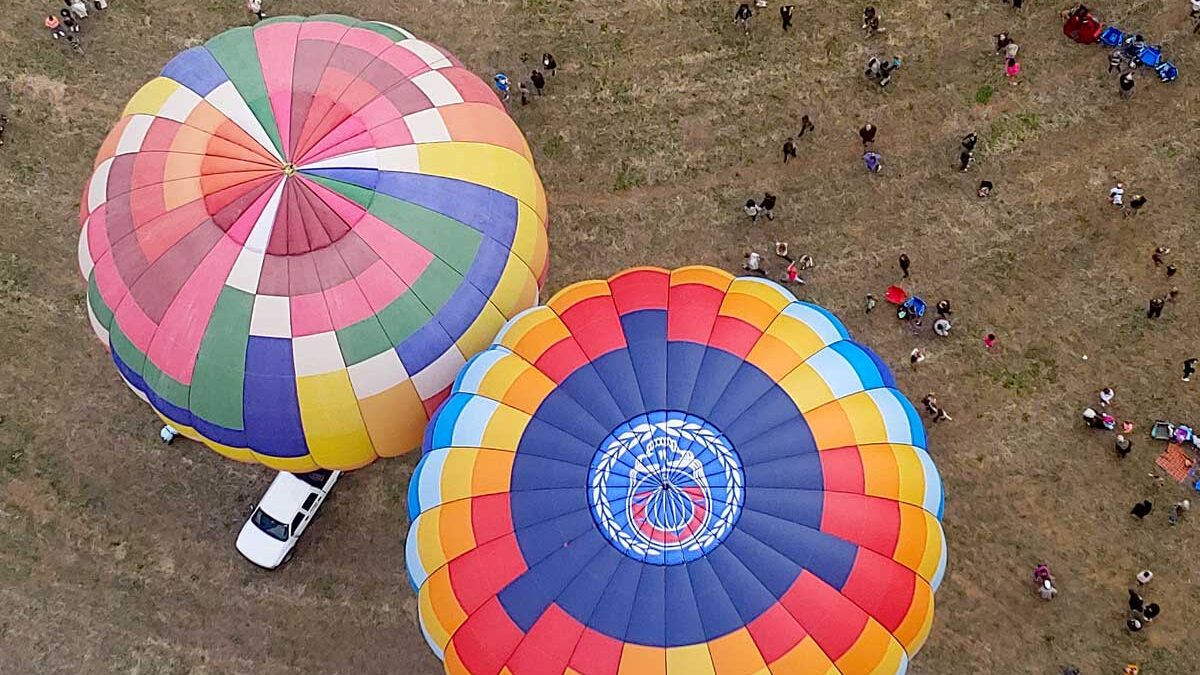 Tom tells me ballooning is definitely a sport, even if it doesn’t seem obvious. I asked Tom to explain the sporting side of it, and he told me with all enthusiasm that, “you actually do have a true sport competition. It’s called a Fox and a Hound.” I’m intrigued. Do go on, Tom. The sport sounds fun but also dangerous. To play, “you send out the fox first; somebody will go up in a balloon and they’ll drop geolocation markers, by a certain route, and they’ll set it up based on how the wind is that day. Then you’ll have a team of maybe six to twelves balloons that fly up after them and the goal is to drop a beanbag on that marker, and get it as close as possible… and the more close [sic] you get and the more markers you get to hit, then you win.”

The dangerous part being, “there’s hilarious things people fo,” Tom chuckles. I don’t find what comes next funny. “There are some very sporty people, who fly small balloons, and they’ll drop 1000 feet out of the sky and blast their burners right before they touch the ground, drop their bean bag, and jump back up again.” Sounds terrifying. Count us in.

The other sport aspect Tom mentions is distance. There are different types of distance, including altitude based. We naturally think of distance as traveling from point A to point B, which is the other type. Bertrand Piccard and Brian Jones flew a helium/hot air balloon, the Breitling Orbiter 3, around the globe setting the longest ever flight covering 46,759 km (29,055 mi) in 19 days, 21 hours, and 55 minutes. Holy sh*t. For A to not traditional point B distance, on November 26, 2005, Vijaypat Singhania set the world altitude record for highest hot-air balloon flight, reaching 21,027 m (68,986 ft). He took off from downtown Mumbai, India, and landed 240 km (150 mi) south in Panchale.

Vitale points out that, “many balloonists compete in races, target games, and set pace on speed records and duration distances, and some enjoy the thrill of unorthodox terrain. Ballooning can rank with other outdoor sports such as boating or off-road mountain biking.”

We had no idea the sport was so diverse and fun. What do you think, are you feeling adventurous yet? There are plenty of ballon events on the calendar. 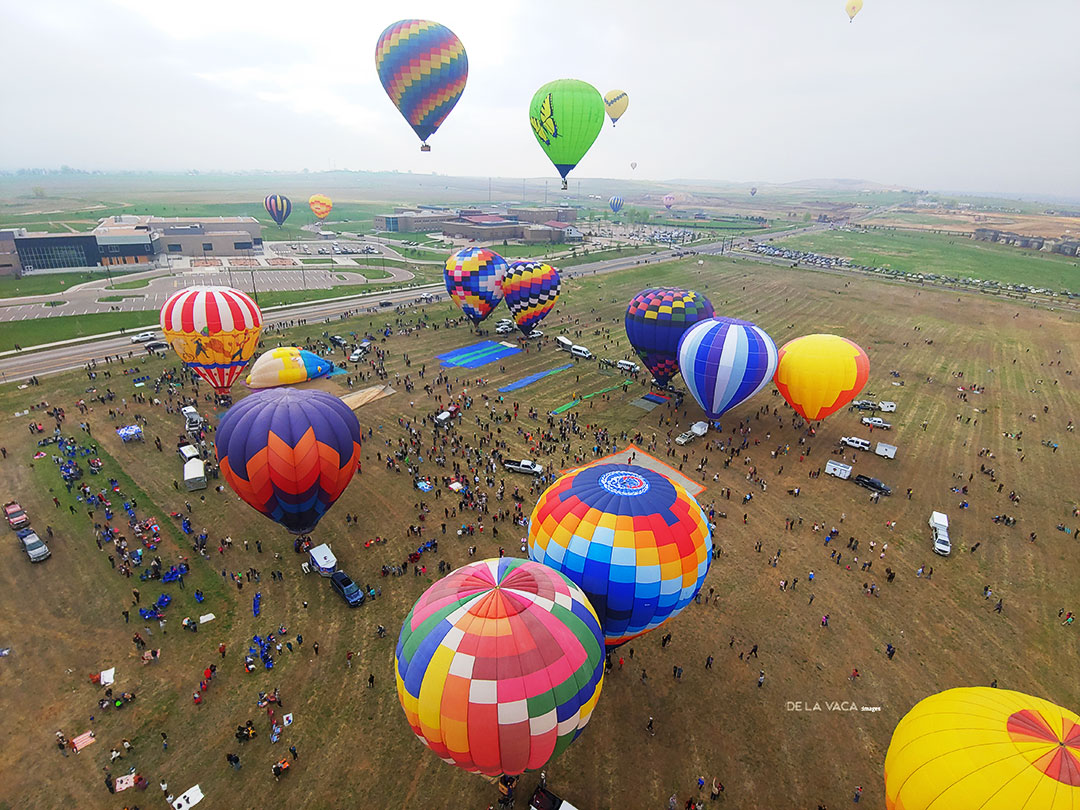 Colorado skies are known for their beauty, the sheer rainbow spectrum in our sunrises and sunsets making the heavens above a regular source of pride and photography. That beauty is only enhanced during the many balloon festivals that Coloradans have the chance to experience. Feel free to get there early to see the launch and watch them drift off and glow in the morning sun. Some of the festivals allow spectators to get up close and personal, talk to pilots and crew, and get awesome selfies, so plan ahead.

If you want to fly but you’re not quite sure (or don’t want to shell out), showing up to volunteer and crew is a great way to develop rapport with operators. Crewing in this sense means helping unload the envelope and other equipment, getting the balloon stood up and afloat, chasing to pick up at the landing site, and loading up. Volunteer crews often get a free ride when it’s available.

Speaking for my own recent experience, I was able to go up with the Wind Whisperer, based in Parker, CO,  and piloted by David Bowling and his wife Patti, during the Erie Town Fair and Hot Air Balloon Festival over the May 15th weekend. Yellow Scene is a regular sponsor, but in my four-year tenure here, weather has not permitted balloon launches. This was the first year that I’ve seen balloons launch and been able to go up. 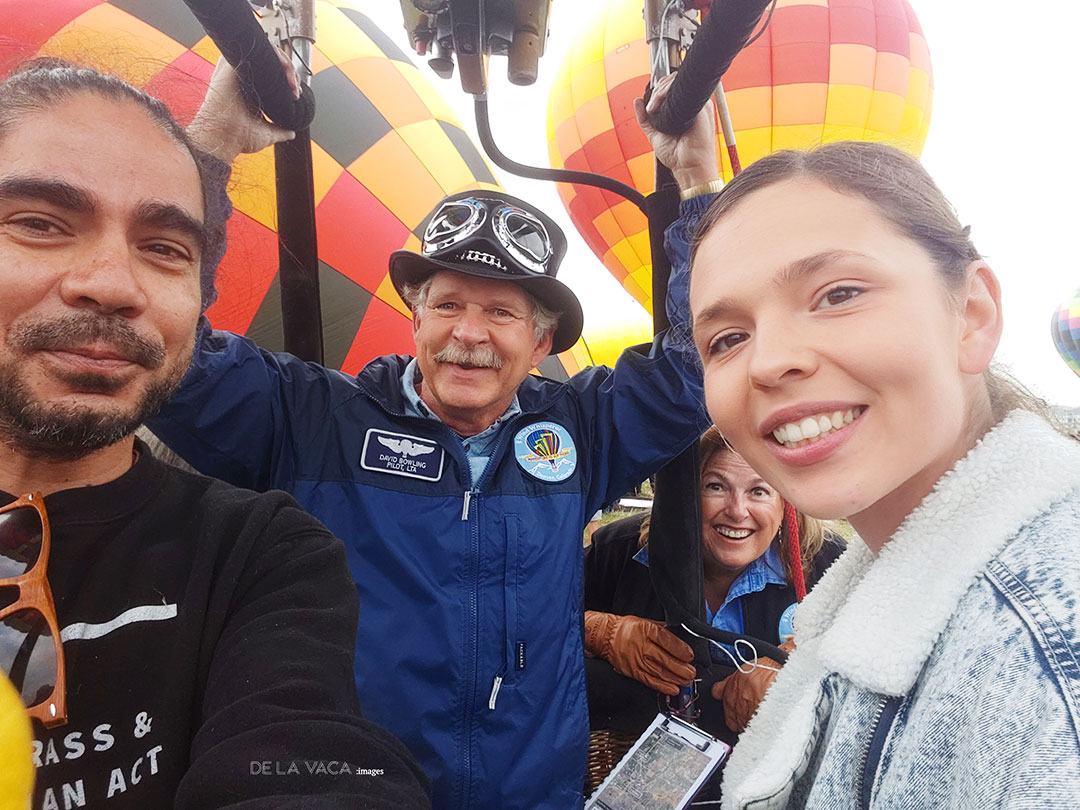 De La Vaca and Ray Schutt with David and Patti Bowling, Pilot and Crew Chief of the Wind Whisperer

I can definitely understand how it can become a wild sport, dangerous and fun, but I can also speak for the casualness of flight. I was fully prepared to be more nervous than I was but, the truth is, becoming an aeronaut – which is what you’re called when you go hot air ballooning – is a gentle and reflective experience. The world is quieted, the view of the Earth changes, and everything drifts away. It’s not like being in a plane.

I highly recommend ballooning and balloon events, whether you choose to become a sport balloonist, weekend pilot, or a bucket list adventurer. I recommend it whether you go up at all, opting maybe to pull up some camping chairs, take selfies, and enjoy the view. Have fun, kiss the wind, and know that when you go up you become family to a very small group of global adventurers. You become an aeronaut. Pin on wings not included.

For a list of operators across the state, check out colorado.com/colorado-balloon-ride-companies.