“Form a gang and raid east to west until you’re Governor or dead!” | Duly Noted

Those were the words shared in a tweet by 47-year-old Lyndon McLeod, a.k.a. Roman McClay, in response to another person on Twitter asking, “What if I’m a teenager? What do (I do)?” 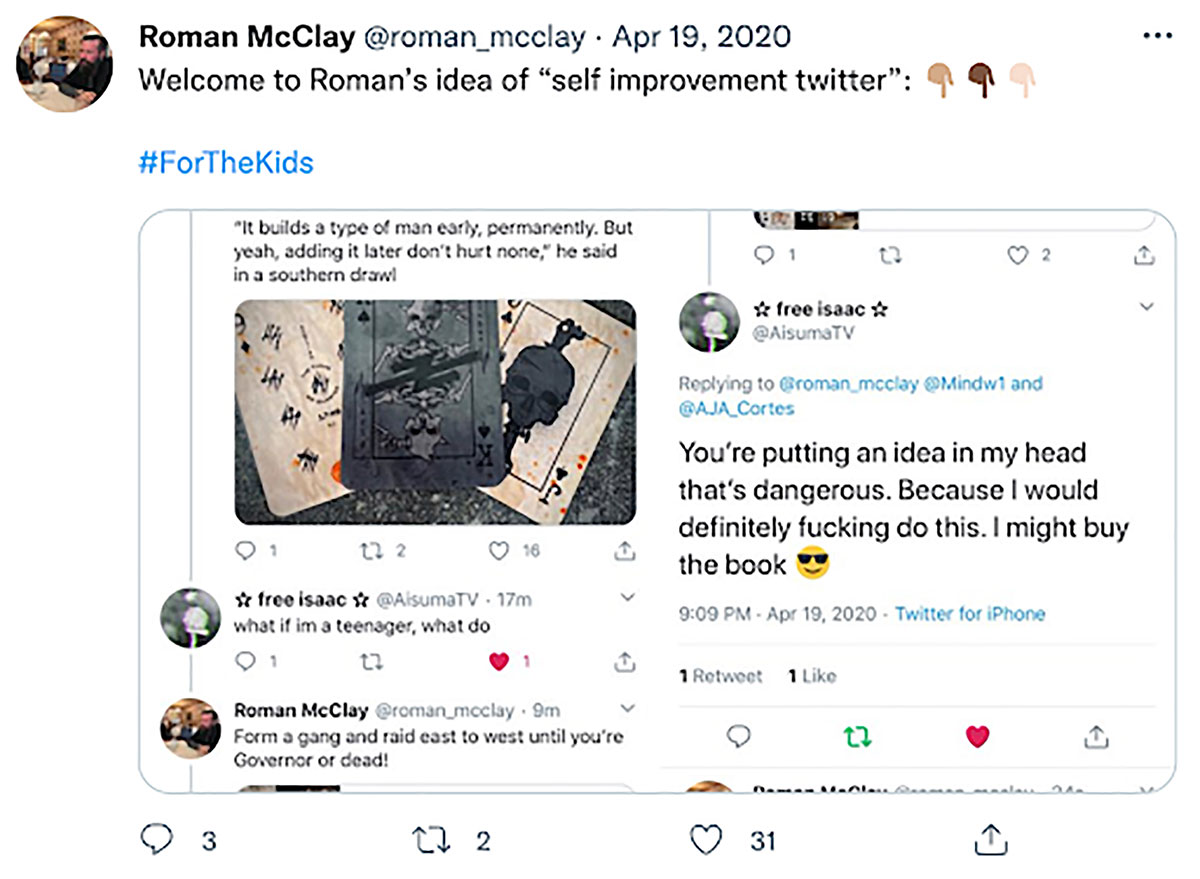 As it turns out, McLeod took his own advice. While it appears he acted as a gang of one, he moved east to west in Denver on Dec. 27, starting a little after 5 p.m. at Sol Tribe Tattoo & Piercing at 1st and Broadway, where he shot and killed shop owner Alicia Cardenas (44) as well as Alyssa Gunn-Maldonado and wounding her husband Jimmy Maldonado.

From there, according to TheDenverChannel.com (who did excellent work piecing together the timeline of events in short order) he murdered Michael Swinyard in his home near 12th and Williams. He was spotted a short time later at 8th and Zuni, where he exchanged gunfire with police and fled, heading further west to Lucky 13 Tattoo shop near Colfax and Kipling St., where he shot and killed 38-year-old tattoo artist Danny Scofield. He was spotted a short time later near South Vance Street and West Alaska Drive, where he entered the Hyatt House hotel there and shot and killed 28-year-old Sara Steck, a front desk clerk.

Lakewood police caught up with him nearby, where he shot and wounded one officer (in stable condition). Despite being wounded, she returned fire and killed him, finally ending his terror spree.

Cardenas leaves a particularly outsized hole in the heart of the Denver arts scene. Her long-time presence as a body modification artist as well as a muralist made her a fixture known to many, and beloved by all.

As to motive, police have yet to release a statement, but after spending some time looking into McLeod’s history, it’s pretty easy to draw some conclusions. For one — he owned a tattoo shop called Flat Black Inc. which he appears to have ceased ownership of in 2017. He was clearly aware of and involved in the tattoo industry, and that seems to play into his choice of targets. According to the Greeley Tribune, Sol Tribe — owned by Cardenas — took over the space previously held by McLeod for his tattoo shop. It’s not hard to imagine that a White supremacist — and misogynist — took great exception to the runaway success of the shop Cardenas built on the ashes of his own complete failures. And far be it from men like him to accept any responsibility for their own deficiencies.

The obvious smoking gun is his 3-book manifesto in novel form called Sanction, a fevered dream of misogyny, hate, racism, antisemitism and violence that paints a clearer picture of a would-be accelerationist mindset. The protagonist in his novels is named after himself — and in fact the character shoots and kills people in a tattoo shop on 6th Avenue in Denver. Indeed, McLeod actually named Michael Swinyard and Cardenas in his novel and detailed how he would kill them.

Digging into his Twitter history reveals the warped sense of White, male entitlement embroiled in a victimhood mentality so common among the far-right White supremacist mindset. He espouses great admiration for displays of violence and power, and is particularly enamored with specific figures in the Neo-Nazi movement, such as “Bronze Age Pervert,” whose Twitter account was suspended Aug. 4. McLeod frequently shared passages from BAP’s book, Bronze Age Mindset that proselytized racism, misogyny, and antisemitism, such as the one below with his own notes in the margins: 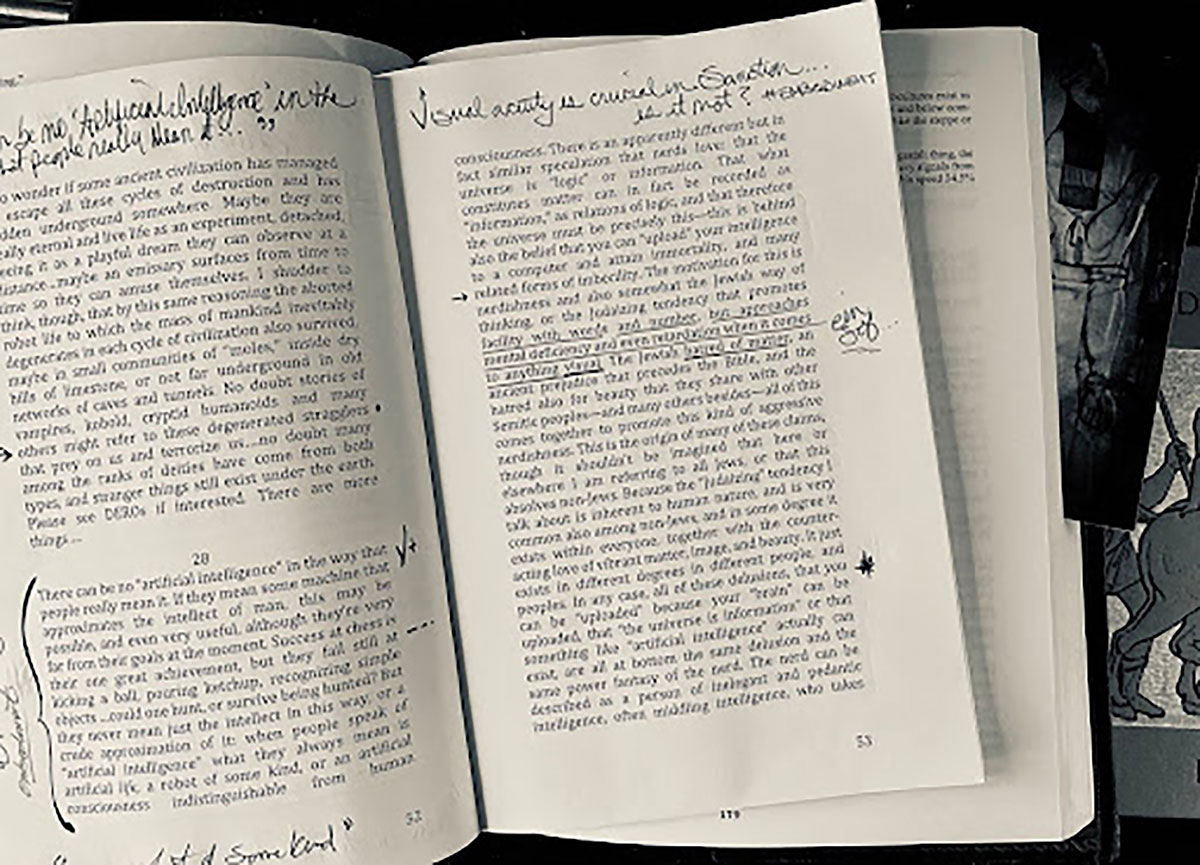 If you’re unfamiliar with the term “accelerationist,” it’s time to familiarize yourself with it. It was first coined by Roger Zelany, a sci-fi writer in his 1967 novel, Lord of Light, to describe a revolutionary group’s desire to speed up technological adoption and thereby societal evolution. In recent years however, the term was adopted by the far-right and Neo-Nazi groups who align the idea with an all-out race war and seek transformative chaos therein. It’s a throughput that exists in McLeod’s Twitter history and novels — a deep affinity for racial polarization and Artificial Intelligence. Kind of a cross between Birth of a Nation and The Terminator.

The sheer ugliness of his beliefs is only overshadowed by his murderous actions, which have torn a hole in the Denver arts community. And while it’s best he and his writings be cast into a trash heap of obscurity, it’s also important for us all to take note of the growing cadre of people who think like him, people who have been emboldened by the growing philosophy of White nationalism permeating our country since 2016.

They may be cockroaches, but they no longer scatter under the glare of the spotlight. And that makes them more dangerous than ever.