Jonathan Singer: A Spiderweb of Justice | The ACTIONISTS Series 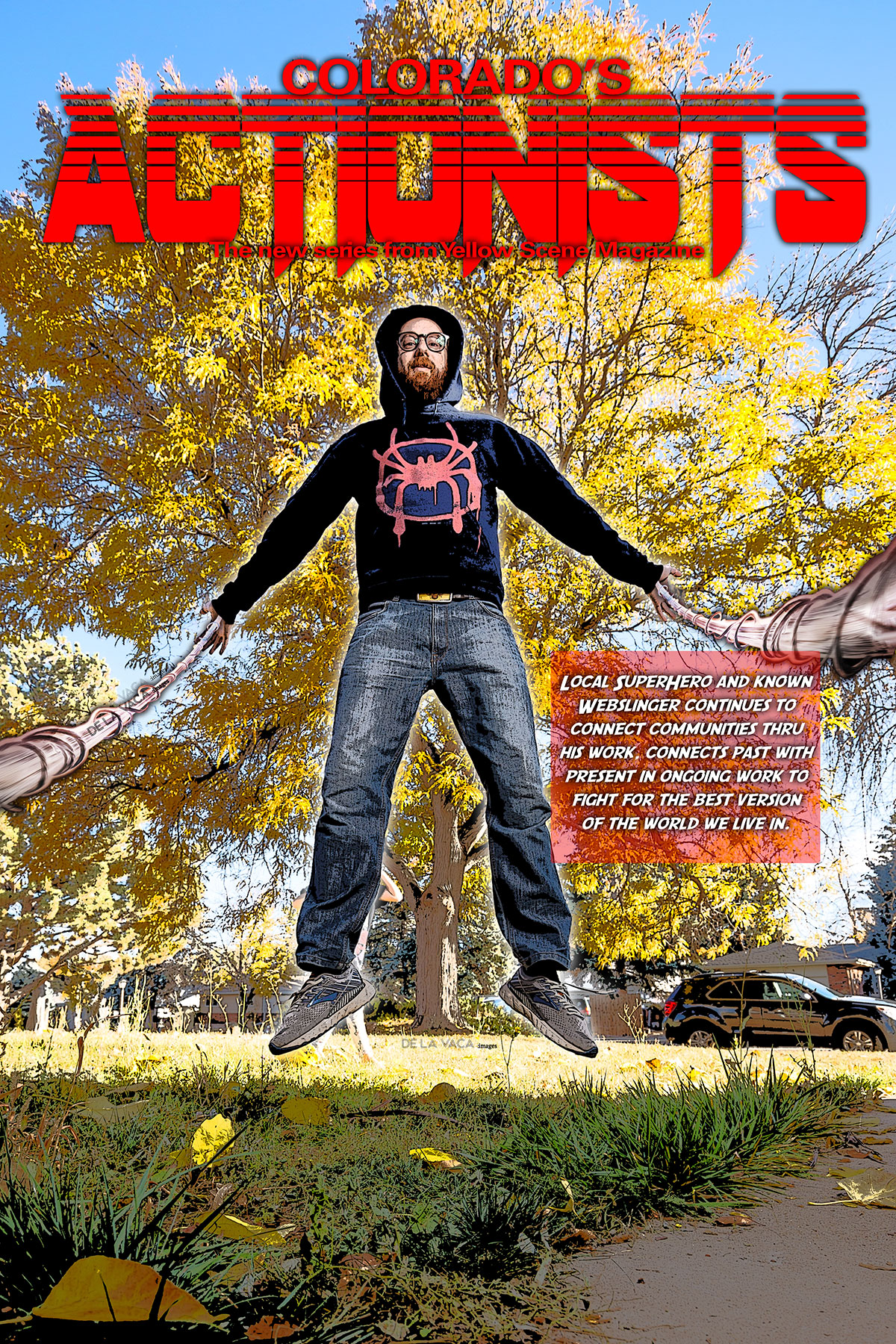 “My mom used to tell me I had a good sense of justice at a very young age,” former State Rep, current Executive Director of LOGIC (League of Oil and Gas Impacted Communities), Jonathan Singer begins. The origin story for this Longmont-based web-slinger for justice starts, ironically, with a Superman t-shirt. At 5 years old, trying to read the text on a tee, he asked his mom what the Superman shirt had emblazoned across it. “Man of Steel,” his mom replied.

Crestfallen, Singer asked his mother, “what did Superman steal?” We belly laughed at that one, ensconced in the patio seating portion of his otherwise kid toy dominated back yard. It was nearing the end of daylight and we had just spent an hour taking pictures of him and his children.

That innate sense of fairness finds overlaps throughout his life. Born and raised “South of the Southies” in a 400 year old blue collar, working class neighborhood in Boston, he recalls being the only Jewish kid in school, till his sister was old enough to attend. “It was very instructive, on a lot of different levels,” he says. “I learned a lot about what it is to – sort of – represent a whole group of people. And at the same time… [after a Jewish teacher asked him to speak on what Hanukkah is], a day later, my teacher had a letter of reprimand in her file. This is a public school. This is a holiday tradition… All of a sudden, I understand what it felt like to stand out.”

“…All of a sudden, I understand what it felt like to stand out.”

That was one of the first times he recalls being excited to be fighting for something. Later, in a cafeteria line in school – “the best place to understand social interactions,” he says – a kid asked him if he was Jewish. To Singer it was innocent, but a kid in line behind him, “I think his name was Anthony, had grown like a foot over summer, bigger than everyone by like a head and a half. Anthony looks at me, looks at the other kid, and goes, ‘Hey, Jon, is this kid giving you problems?’ This was before we knew what ‘ally’ meant. That really stuck with me.”

He moved to Colorado for high school, following the closure of the Navy base his father worked at. High school is when he started volunteering. He worked with the Safehouse Progressive Alliance in a program called PBJ (Peers Building Justice). Later in college, he doubled in psychology and social work. Wanting to apply his skills and passion, he did a field placement at a Catholic church with a center for social justice. The multifaceted nature of the project – from hands-on help to data collection to lobbying efforts – informed his life trajectory.

In grad school he worked to change the rules on campus to support drug users. Students caught with or no drugs were previously expelled. “Kicking kids out of school, taking away the one thing they probably like, is a terrible way to actually help them.”

“Kicking kids out of school, taking away the one thing they probably like, is a terrible way to actually help them.”

He had stints at (then) Boulder Valley YMCA, did his first campaign work, and got pulled into politics heavily when Kucinich ran for president (he was a Republican before then). He became a social worker with the state. He realized then, watching lives ruined over paperwork, that the state really does have power over peoples’ lives. And then he quit.

“Ultimately, I got a few phone calls after I heard this house seat I was going to run for – well, I wasn’t gonna run yet, I didn’t know it was open – but I got phone calls from people who told me to run and I thought, ‘I know a few things that should change.’”

It was a long trajectory to get from Man of Steal to the State House, but it was his sense of justice, the web of justice that drew him to his first (failed) election in 2009 and his first election in 2012 (appointed in January) to his first full election win (in November 2012), a seat he held till January of 2021.

In that time, “We did everything from legalizing cannabis to creating brand new programs for mental health and substance abuse treatment, to expanding the rights of immigrants. If someone had told me 15 years ago,” he says with a certain nostalgic gravitas, “you will have the chance to make a difference in the lives of five and a half million people, and it’s a limited time offer; you have eight years to make the best of it… I couldn’t have imagined doing as much and I’m still sort of in awe of what that opportunity really was.”

He’s a web of inclusion and influence, a long history of fighting in every area he can for justice. He told me that, “some of the most meaningful interactions I had [at the state house] were with people from the other side of the aisle because we would fight like cats and dogs and then on this one issue we’d be thick as thieves. That’s how his work with state senator Vicki Marble came about.

“[S]ome of the most meaningful interactions I had [at the state house] were with people from the other side of the aisle because we would fight like cats and dogs and then on this one issue we’d be thick as thieves.”

His last – and possibly most heroic – act in the statehouse was him dead set on amending someone’s bill to give the governor mass pardoning abilities for past marijuana convictions. “I told myself,” he said, “that I couldn’t live with myself if I couldn’t fix this one injustice before I leave,” one that disproportionately affects Black and Brown bodies, one that should’ve been corrected when marijuana first passed.

The parallel of concluding his political career (for the time being) with a fight to amend drug penalties in Colorado to starting his college career working to amend drug penalties on campus can’t be ignored. This is the web he’s spun. These are the overlaps. This is the web he’s spun over a life built on an innate sense of justice. He says that, “planning may be a strong word,” when asked if he’s planning to run again. We can only hope the web pulls him back in to continue the work he’s been doing, the work that needs to be done.