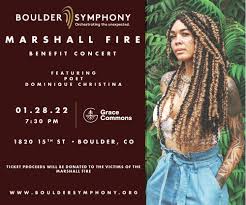 Join the Boulder Symphony for a reimagined look at Stravinsky’s Soldier’s Tale narrated by poet, Dominique Christina, the story of a soldier who trades his violin to a shadowy figure in return for wealth beyond belief.
This fundraising concert will also feature violinist, Gregory Walker, who lost his home in the Marshall Fire. He will be performing the Theme from Schindler’s List and Meditation from Thais. New works befitting the size and shape of Stravinsky’s petit ensemble will grace the stage of Boulder Symphony, including dramatic miniatures by Elizabeth Comninellis and Chilean composer Edgar Gertin.

Tickets from proceeds will go directly to victims of Marshall Fire. 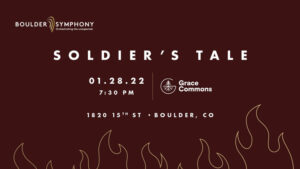