American Ukrainians in Colorado and the War in Ukraine 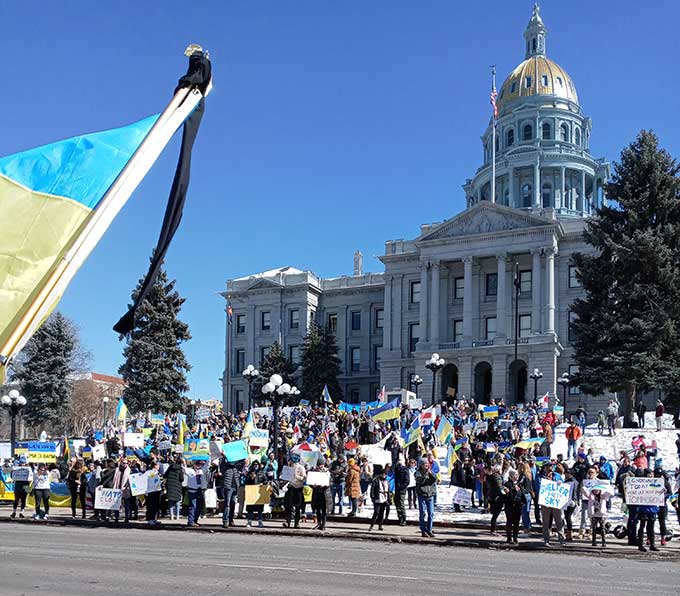 Wira Babiak, a past resident of Boulder and Erie, now lives in Longmont, Colorado. She visited Kyiv, Lviv, Ternopil, and the Carpathian Mountains 25 years ago shortly after Ukraine’s independence from Soviet rule. She says the landscape, architecture, and public art in Ukraine are breathtaking. Striking European architectural styles and long-standing medieval buildings are situated along original cobblestone roads. The people are hospitable, caring, and gentle. Putin’s invasion is destroying the history and beauty of Ukraine.

Even though her older relatives have since passed on, Babiak has cousins who live in the Ternopil area in the small village of Mala Plavycha. This little village, not far from Lviv, was trampled on by the Nazis and Russians during World War II.

Recently, Babiak is unable to reach her cousins. Phone calls are not going through, and her emails remain unanswered. She does not know if her cousins are safe or even alive. Being in Western Ukraine, they are very close to the Polish border and may have sought refuge there. The male cousins may have been turned away to serve in the Ukrainian army.

Although Babiak feels helpless watching the news here in the west, she firmly believes that men and women are standing strong and will fight for democracy and freedom.

Ulana Bihun lives in Louisville, Colorado. She herself has seen what devastation looks like from the Marshall Fire that destroyed many homes close to hers, the images reminding her what a war zone looks like. The news that has been unfolding about Ukraine over the past week has been heartbreaking and unfathomable.

Bihun’s parents were born in Ukraine. They were toddlers when their mothers fled Russian aggression and left their homeland as refugees while their fathers were fighting WWII.

“As a parent, you never know how or what our kids will internalize,” Bihun says, “from this unbelievable happening especially in the 21st century.” Her children, Maya and Andrew, are keenly worried for Ukraine and want to do something about it. In addition to attending pro-Ukrainian rallies in Denver and her son Andrew’s change of heart about learning Ukrainian, Bihun’s family is selling homemade pierogies (varenyky) to raise money to help Ukraine. All proceeds will go to RAZOM, a 501(c)(3) organization run by Bihun’s friend in New York.

Interested in supporting Ukraine in other ways? Visit RAZOM’s website to learn how you can contribute monetarily. Contact your elected officials and attend rallies to make sure your voice is heard.

View all posts by Wira Babiak →