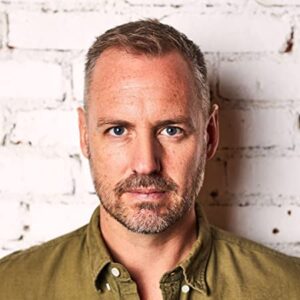 Scott Carney is an award-winning investigative journalist and anthropologist who’s written for WIRED, Mother Jones, Fast Company, Discover Men’s Journal, Playboy, NPR and other publications. A few years ago Scott’s book What Doesn’t Kill Us spent a couple months on the NYT Bestseller list. Carney has a new book coming on March 29th titled The Vortex: A True Story of History’s Deadliest Storm, an Unspeakable War and Liberation that he wrote with conflict researcher Jason Miklian about how a storm that killed half a million people in 1970 presages the worst case scenarios of our collective climate change nightmare. Scott likes to think of it as our attempt to tell the story of climate change as a non-fiction action thriller. What’s more? The very earliest reviews are out of the park amazing, like this starred review from Kirkus:

“[The Vortex] is a riveting, page-turning story of human devastation, political corruption, and individual bravery as well as a cautionary tale with universal relevance. . . . To those who may feel complacent about what happened a half-century ago in a relatively obscure part of the world, Carney and Miklian deliver a stark warning. . . . A powerful, timely exploration of an environmental and political tragedy.”

Read more about The Vortex below:

The world almost ended in December 1971 after the deadliest storm in human history set off a chain of events that split a country in two and brought the United States and Soviet Union into a nuclear showdown. Now, as we approach the 50th anniversary of our near-destruction, the Great Bhola Cyclone reminds us that the greatest danger of climate change isn’t our collapsing environment: it’s the catastrophic wars that it will trigger.

In their new narrative-nonfiction book The Vortex: A True Story of History’s Deadliest Storm, an Unspeakable War and Liberation investigative journalist Scott Carney and peace and conflict researcher Jason Miklian find an allegory for our collective future in the aftermath of a storm that killed half a million people and the genocide and war that followed.

The Vortex tells this incredible true story through the eyes of a soccer star turned soldier, a Miami weatherman, two drunken and genocidal Presidents, a Boston teacher turned aid worker and a student turned revolutionary who all played crucial roles in Bangladesh’s birth. But this book isn’t only about the past, it’s a wakeup call as history threatens to repeat itself. The Vortex shows why every new megastorm is a roll of the dice that can obliterate existing political order and rip societies into open conflict. Climate change means we’re rolling the dice more often and in more vulnerable places. If the next storm hits in the wrong place or at the wrong time, it risks triggering a domino effect that leads to global war.

To celebrate the launch of The Vortex Scott will be holding a launch party and afterparty on March 28th at Bookbar in Denver and on March 29th he will be at Boulder Bookstore to further promote the book.